Campaigning for 4th phase ends, fate of 961 candidates to be decided on April 29

Campaigning for the fourth phase of the ongoing 2019 Lok Sabha election in 72 parliamentary constituencies across nine states ended on Saturday. 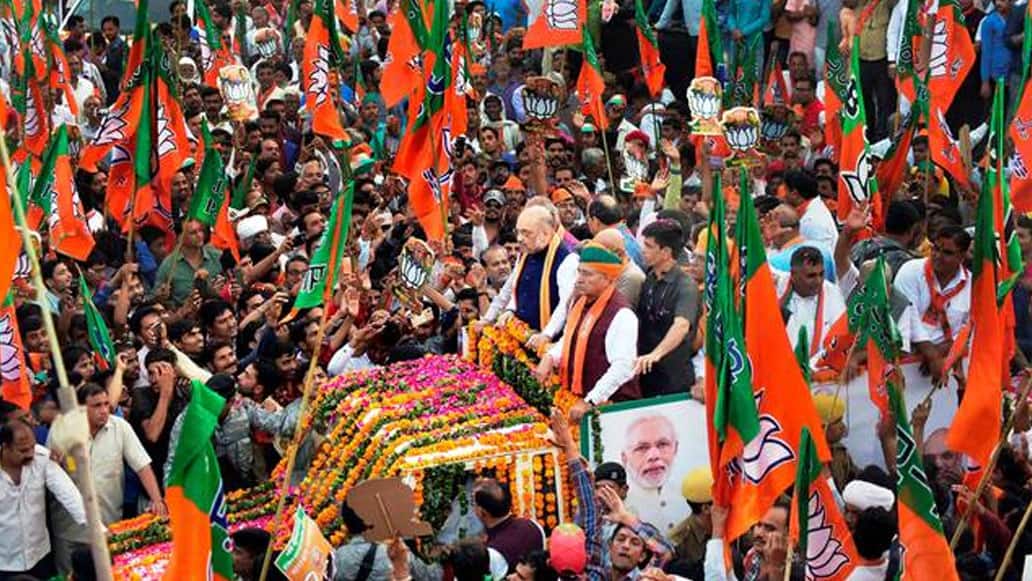 A photo of BJP chief Amit Shah campaigning in Rajasthan
Share:
Written By:

NEW DELHI: A high-decibel campaigning for the fourth phase of the ongoing 2019 Lok Sabha election in 72 parliamentary constituencies across nine states ended on Saturday.

Polling for the same will be held on Monday, April 29 under the watchful eyes of the Election Commission of India. Over 12 crore 79 lakh voters will cast their votes to decide the fate of 961candidates at over 1 lakh 40 thousand polling booths across nine states on April 29.

Here's how the top leaders campaigned for their party candidates in some of the big states.

Feverish campaigning came to an end for the 13 Lok Sabha seats in Uttar Pradesh with top leaders, including Prime Minister Narendra Modi, making a last-minute pitch for votes on Saturday..

PM Modi addressed rallies in Kannauj and Hardoi, two of the UP seats which go to the polls in the fourth phase of voting on Monday. Samajwadi Party president Akhilesh Yadav too spent much of the day in Kannauj, the seat from where his wife Dimple Yadav is seeking re-election.

Congress general secretary Priyanka Gandhi was in Unnao on the last day of electioneering. In 2014, the BJP won 12 of these 13 seats in the state. Only Kannauj, won by the Samajwadi Party, defied the ''Modi wave'' that year among them.

The other constituencies where elections will be held on April 29 are Shahjahanpur (SC), Kheri, Hardoi (SC), Mishrikh (SC), Unnao, Farrukhabad, Etawah (SC), Kanpur, Akbarpur, Jalaun (SC), Jhansi and Hamirpur. Apart from the back-to-back rallies in Kannauj and Hardoi on Saturday, PM Modi addressed another in Sitapur where polling will take place in the fifth phase.

Congress president Rahul Gandhi held meetings in Kheri, Unnao and Kanpur during the run-up to polling for these seats. His sister and party general secretary Priyanka Gandhi led roadshows in Kanpur, Jhansi and Hamirpur.

Most of these seats are seen as a direct fight between the BJP and SP-BSP alliance with Kannauj being a matter of prestige for the SP.

An impressive roadshow was held there when Dimple Yadav filed her papers. Bahujan Samaj Party chief Mayawati came to Kannauj to attend a joint rally with the SP and when Dimple Yadav touched her feet on the dais, it became a talking point.

Altogether, 2,38,88,367 people are eligible to cast their vote at 27,513 booths in the 13 constituencies. A total of 152 candidates are in the fray with a maximum of 15 in Shahjahanpur. Jalaun has the minimum number of nominees at five.

A total of 172 candidates are in the fray here on these seats.

Campaigning ended on Saturday for the five Lok Sabha seats of Begusarai, Munger, Ujiyarpur, Samastipur and Darbhanga in Bihar which will go to the polls in the fourth phase on April 29.

PM Modi held a rally at Darbhanga where he defended his use of national security as a poll plank and came down heavily on the reluctance of local RJD candidate Abdul Bari Siddiqui, whom he did not mention by name, to recite the national song Vande Mataram. Currently held by Kirti Azad, who has now joined Congress and is contesting from Dhanbad in neighbouring Jharkhand, Darbhanga is being contested by former BJP MLA Gopalji Thakur.

Rahul Gandhi shared the stage with RJD heir apparent Tejashwi Yadav at a rally in Samastipur ending speculations of discord between the two alliance partners.

The rally was also attended by RLSP chief Upendra Kushwaha, who is in the fray from adjoining Ujiyarpur currently held by state BJP chief Nityanand Rai.

BJP president Amit Shah also held rallies at Ujiyarpur, Begusarai and Munger the last being the only seat in the fourth phase which is being contested by Chief Minister Nitish Kumars JD(U).

The cynosure of all eyes in this phase, however, is the Begusarai seat which will witness an electrifying contest between the political Left and the Right with CPI debutant Kanhaiya Kumar taking on firebrand BJP leader Giriraj Singh. Lying vacant since the death of sitting MP Bhola Singh a few months ago, Begusarai also has RJDs Tanveer Hassan, who had finished runner up five years ago in the fray.

Seeking to erase the stigma of a sedition case through a political mandate, the former JNU students union president has tirelessly carried out a door-to-door campaign besides holding countless small to medium-sized meetings in which he sought to underscore his humble roots by speaking in the local dialect and position himself as one conversant with politics at all levels from local to international.

On the day of filing nominations, supporters from far-off places including Bollywood actress Swara Bhaskar, civil rights activist Teesta Setalwad, dalit MLA from Gujarat Jignesh Mevani and Jammu and Kashmir-based fellow JNU alumnus Shehla Rashid were in Begusarai to canvass in his support.

Others who have toured the riparian district in support of the 32-year-old include Bollywood celebrities Javed Akhtar, Shabana Azmi and Prakash Raj, Swaraj India founder Yogendra Yadav besides top Left leaders like Sitaram Yechury and Sudhakar Reddy.

Renowned motivational speaker and author Shiv Khera campaigned in Beguserai for Giriraj Singh and is expected to do the same for some more NDA candidates in the state.

About 100 writers and poets around Bihar, including Sahitya Akademi winner Arun Kamal and Hindi poets Alok Dhanwa and Khagendra Thakur have issued a joint statement appealing to the people of Beguserai to give the young CPI candidate a chance.

The high-voltage campaigning by different political parties for the fourth phase of Lok Sabha election in eight constituencies of West Bengal slated for April 29 came to an end Saturday evening.

All the eight seats, which are spread across four districts, will see a four-cornered contest between Trinamool Congress, BJP, Congress and the Left Front.

The Election Commission will deploy a total of 580 companies of central forces, which will cover all the polling booths in the eight Lok Sabha constituencies to ensure free and fair polling.

Mamtaz Sanghamita is the TMC candidate from Burdwan-Durgapur seat against BJP's SS Ahluwalia. The Congress has nominated Ranajit Mukherjee and the CPI(M) named Abhas Ray Chaudhuri for the seat.

Celebrity candidate Satabdi Roy is the TMC candidate from Birbhum seat against BJP's Dudh Kumar Mondal. The Congress has nominated Imam Hossain and the CPI(M) named Rezaul Karim for the seat.

Curtains were drawn on the high-decibel campaign on Saturday evening for six Lok Sabha and 41 assembly seats of Odisha where polling will be held in the fourth phase on April 29.

Electioneering had reached a feverish pitch for this phase as a galaxy of leaders from parties such as the BJP, the Congress and the ruling Biju Janata Dal (BJD) undertook tours of the constituencies, mostly in coastal Odisha.

Polling in Mayurbhanj, Balasore, Bhadrak, Jajpur, Kendrapara and Jagatsinghpur Lok Sabha seats and 41 assembly segments coming under these six constituencies will be held on Monday.

This will be the final phase of polling in Odisha, except for Patkura assembly seat where voting is slated to be held on May 19 following the death of the BJD candidate.

For the ruling BJD, party president and state Chief Minister Naveen Patnaik undertook extensive tours of the poll-bound areas and held roadshows. He is seeking re-election for the fifth term.

The fourth phase polling will decide the electoral fortune of 388 candidates - 52 in Lok Sabha seats and 336 in 41 assembly constituencies.

The state has 21 Lok Sabha and 147 Assembly seats.

In Maharashtra, the campaigning for the fourth and final phase of 2019 Lok Sabha election for 17 Lok Sabha constituencies in Maharashtra, including the Mumbai region, ended on Saturday.

During the canvassing, which mainly remained centred around issues like nationalism and agricultural distress, PM Narendra Modi tried to woo the rural as well as cosmopolitan voters by highlighting infrastructural and developmental work done under his rule. In response to that, Congress president Rahul Gandhi tried to project his party's proposed minimum guarantee scheme or "NYAY" as a game changer for the poor.

A total of 3.11 crore voters, spread over Mumbai metropolitan region and parts of northern and western Maharashtra, are eligible to exercise their franchise, which would decide the fate of 323 candidates in the fray. Voting will take place on April 29 between 7 AM and 6 PM.

In 2014 general elections, the BJP had won eight seats and its alliance partner Shiv Sena nine seats out of the total 17 seats that will vote in the fourth phase on Monday.

The BJP later improved its tally by winning the bypoll to Palghar constituency in 2018. The new MP Rajendra Gavit is contesting on Shiv Sena ticket this time.

Opposition Congress is facing a tough task of reclaiming its lost base in North Maharashtra and Mumbai, while the NCP is trying to get a foothold in Thane district and Western Maharashtra, which used to be its stronghold before 2014 polls. During the campaigning, the prime minister had addressed rallies in Nandurbar, Dindori and Mumbai while Gandhi canvassed in Shirdi.

Interesting contests on the cards are between actor-turned-politician Urmila Matondkar in Mumbai North. She faces a tough task to unseat BJP veteran and sitting MP Gopal Shetty.

The combines of the Shiv Sena-BJP and the Congress-NCP are each contesting three out of the total six seats in Mumbai. Another keenly-watched fight is between Milind Deora of Congress and sitting MP Arvind Sawant of Shiv Sena in Mumbai South.

In Mumbai North East seat, which hogged the limelight after sitting BJP MP Kirit Somaiya was denied a ticket, the contest lies between Manoj Kotak and former MP Sanjay Dina Patil of the NCP.

In Dindori, the BJP is facing a stiff challenge from Left leader Jiva Pandu Gavit. In Nandurbar, the party is trying to retain the seat amid intense infighting in the local unit.

In Nashik, sitting Sena MP Hemant Godse is in the fray against Sameer Bhujbal, nephew of NCP stalwart Chhagan Bhujbal who is battling money laundering charges.

In Thane neighbouring Mumbai, sitting MP Rajan Vichare of Shiv Sena is pitted against Anand Paranjape of the NCP, while in Kalyan, the main contest lies between Sena's Shrikant Shinde and NCP's Babaji Patil.

Maharashtra sends a total of 48 MPs to Lok Sabha, the second highest after Uttar Pradesh (80).

Campaigning for the polling in Jharkhand's three Lok Sabha constituencies to be held on April 29 ended on Saturday afternoon. Monday's voting will be the first phase in the BJP-ruled state and the fourth in the country.

Addressing poll rallies in Jharkhand this week, a host of top BJP leaders including PM Modi and party president Amit Shah appealed to the people to re-elect the NDA to take forward the developmental works and protect the country's security.

No prominent national level leaders of opposition parties campaigned in the three seats - Lohardaga (ST), Chatra and Palamu (SC) - in the run up to the elections, campaigning for which ended at 4 PM.

Altogether 45,26,693 voters will be eligible to exercise their franchise in this phase while the number of candidates is 59 including Union Minister of State for Tribal Affairs Sudarshan Bhagat.

As there are some Naxal pockets in Palamu and Chatra, borders with Bihar have been sealed and adequate security arrangements have been made for the polling to be held between 7 AM and 4 PM on April 29.