Ever since the TRS swept Telangana Assembly Elections last year, KCR's urge to play a big role in national politics has been evident. 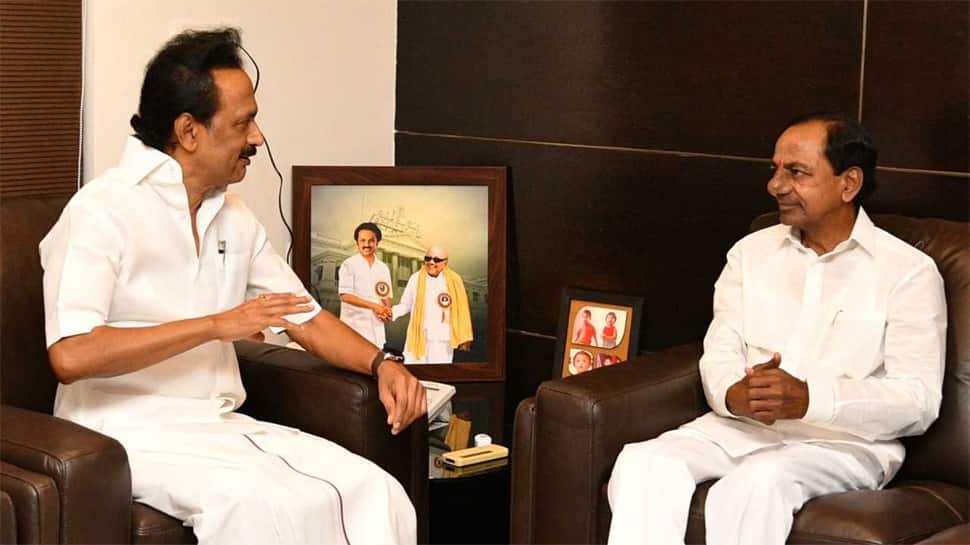 There's a popular adage in Telugu 'Swamikaryam...Swakaryam' (God's work and personal work). However, in the case of Telangana Chief Minister K Chandrashekar Rao, it's 'God and politics'. The reason being that along with pilgrimage to different temples in Tamil Nadu, KCR had been craving to meet Dravida Munnetra Kazhgam (DMK) President MK Stalin. The meet assumes significance on many counts.

Earlier, nearly a week ago, when KCR had sent a word to DMK, the response was not favourable saying Stalin has to campaign for by-elections. However, on Monday, Stalin along with his trusted party men Durai Murugan and TR Balu personally received KCR when he came to Stalin's Alwarpet residence in Chennai around 4 pm. Officially,  though, it was said to be just a 'courtesy meeting'.

After exchanging pleasantries, the closed-door meeting took place for more than an hour. What transpired in the meeting is subject to speculation as none of the two sides revealed shared details of the conversation.

The interesting aspect here is why did Stalin meet KCR when he has already declared his support for Rahul Gandhi as Prime Ministerial candidate and Congress is arch-rival of KCR and TRS in Telangana politics.

Downplaying the meeting, KS Alagiri, Tamil Nadu Congress president, said: "As of today, there's no possibility of Third Front or Federal Front in India. Our culture is not to say no when someone wants to meet."

However, Chennai-based political analyst Sumanth C Raman says, "Stalin apparently turned down the meeting a few days ago but has now gone ahead with it because my guess would be that the Congress is on the discussions too and may have asked Stalin to get an idea of what's on KCR's mind.''

A sharp and astute politician that he is, KCR can count on only 16 Lok Sabha seats from Telangana (if he manages to win them all) and one seat of his trusted ally Asaduddin Owaisi of AIMIM. But with sixteen plus one, KCR wants to play kingmaker's role like his friend-turned-bitter-political-rival Nara Chandrababu Naidu, who was instrumental in making HD Deve Gowda the Prime Minister in United Front days.

With just the seventh and the last phase of Lok Sabha election left to take place on May 19 and results on May 23, no one, including KCR wants to leave any stone unturned to have a say in national politics.