The BJP did well to assuage the anger of voters on contentious issues like joblessness and land rights but the party deserves special credit for quelling down rebellions from its own party members. 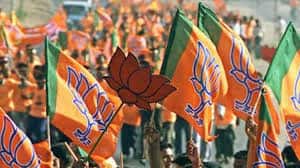 RANCHI: Saffron wave swept across Jharkhand once again with the BJP-led NDA leading in 12 out of 14 seats in the state. The Congress was leading only in Singhbhum Lok Sabha seat. Although Jharkhand has been a stronghold of BJP for over three decades, this time the saffron party was facing stiff competition from the grand alliance, which included Congress, Jharkhand Mukti Morcha (JMM), the Jharkhand Vikash Morcha (Prajatantrik) and the Rashtriya Janata Dal (RJD)

The BJP managed to register a landslide victory in Jharkhand largely due to its ability to keep its enemies, both within and outside the party under control. The saffron party did well to assuage the anger of voters on contentious issues like joblessness and land rights but the party deserves special credit for quelling down rebellions from its own party members. The BJP managed to ward off all these issues by using the charisma of Prime Minister Narendra Modi.

The Grand Alliance of opposition parties seems to have failed in the Lok Sabha elections Jharkhand if the counting trends and margins were any indications.

BJP was leading in 11 seats and its ally the All Jharkhand Students Union (AJSU) in one seat till the reports last came in. Both the Congress and the Jharkhand Mukti Morcha (JMM) was leading in one seat each. The BJP registered a convincing lead in seven seats and was locked in a tough fight in two constituencies - Khuti and Lohardagga.

Union Minister Jayant Sinha took a big lead of over 388,461 votes over his rival Congress candidate Gopal Sahu. Two former Chief Minister were on the verge of losing the polls, while a third one was struggling. JMM president Shibu Soren was trailing by over 32,651 votes from the BJP candidate Sunil Soren. Unconfirmed reports said that Soren lost the poll by over 42000 votes.

In Lohardagga, Union Minister Sudarsan Bhagat of the BJP was locked in a tough fight against Congress candidate Sukhdeo Bhagat.

The BJP also registered good leads in the Palamau, Chatra, Godda and Dhanbad seats. AJSU took a convincing lead of more than 2,47,000 votes in Giridih.

The four parties - JMM, Congress, RJD and JVM-P had formed a Grand Alliance in Jharkhand to take on the BJP. The alliance seems to have not worked and JMM is set to lose its traditional Dumka seat.

"This is history. Under the leadership of Narendra Modi and Amit Shah development and national security became election issues and we won the election", he said.

BJP wins Bahraich seat in UP by over 1.28 lakh votes