The main battle in Tamil Nadu was between AIADMK-BJP and DMK-Congress. In the lone seat of Puducherry, the All India NR Congress (AINRC) and the Congress are the only two parties. 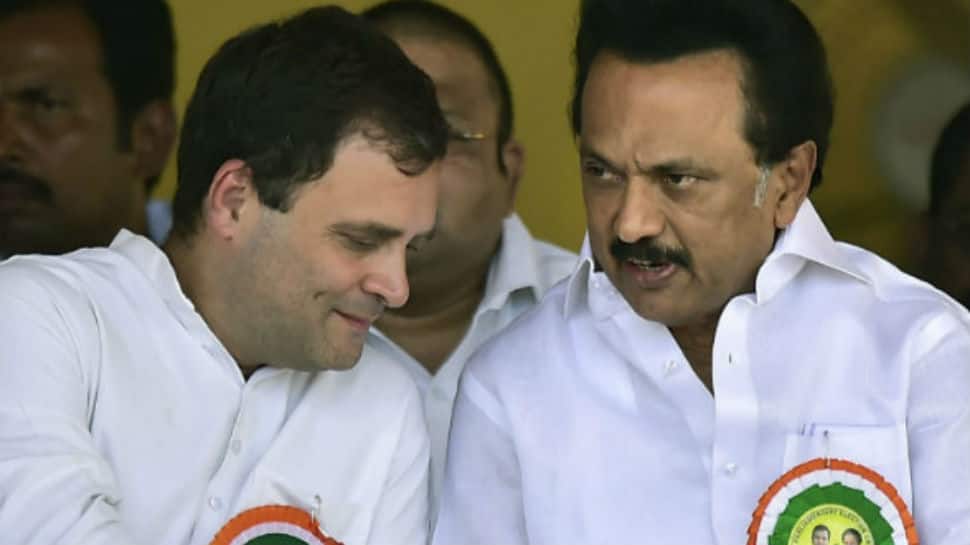 Chennai: In the 38 Lok Sabha seats in Tamil Nadu, DMK, which is in alliance with the Congress and other parties, has as swept 31 seats. DMK won 23 seats, Congress eight and CPI and CPI(M), their other allies, registered victory in one seat each.

The ruling AIADMK secured only one seat in Tamil Nadu's Theni.

Meanwhile, in Puducherry, V Vaithilingam has won the lone seat for Congress.

Eight hundred and twenty two candidates were in the fray from Tamil Nadu while 18 candidates contested from Puducherry. The main battle in Tamil Nadu was between AIADMK-BJP and DMK-Congress. This was the first major election in Tamil Nadu without the two stalwarts - J Jayalalithaa and M Karunanidhi.

In Puducherry, the All India NR Congress (AINRC) and the Congress were the only two parties.

Welcome back to the live updates of Lok Sabha election results 2019 from Tamil Nadu.

# #TamilNadu: Celebrations outside DMK headquarters in Chennai; According to Official EC trends, DMK is leading on 22 seats pic.twitter.com/rWYr7DfBjQ

# Celebrations have begun at DMK office in Chennai as election result are announced.

# Counting of votes will be done in 45 centres across the state, with over 17,000 polling staff and 45,000 police personnel deployed.

# The Vellore Lok Sabha seat in Tamil Nadu did not go to polls after the Election Commission cancelled voting here due to allegations of use of money power.

# Most of the exit polls have predicted that Congress-DMK will get close to 27-30 seats in Tamil Nadu while the BJP-AIADMK alliance will 7-9 seats.

# The final results will be considered after tallying the Voter-Verified Paper Audit Trail (VVPAT) slips with five EVMs per assembly segments.

# Watch live streaming of Lok Sabha election result 2019 of 38 seats in Tamil Nadu and one seat in Puducherry on mobile, desktop on Zee News.