After a team of BJP MPs denied permission to visit violence-hit Kaliachak in West Bengal's Malda district, the saffron party has raised some serious allegations. 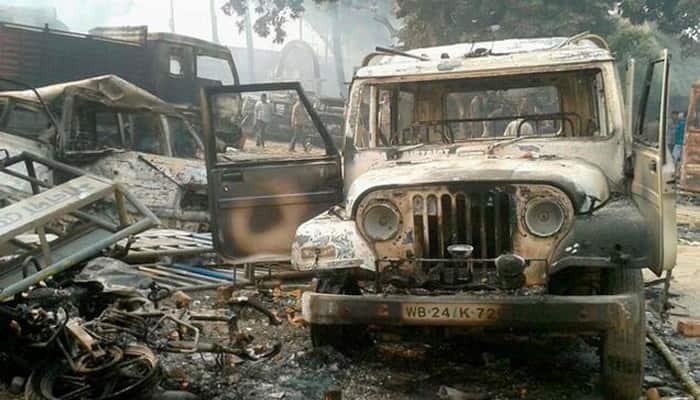 Malda: After a team of BJP MPs denied permission to visit violence-hit Kaliachak in West Bengal's Malda district, the saffron party has raised some serious allegations.

Senior BJP leader Siddharth Nath Singh has claimed the purpose behind setting fire to Kaliachak police station was to destroy the records allegedly related to a fake currency racket kept in the police station.

According to Siddharth Nath Singh, Malda had become a major hub of the fake currency racket and opium smuggling, but the TMC government was not taking any action due to its votebank politics.

"You have taken no action despite knowing it. 80 per cent of fake currency passes through Malda. Opium is produced there and smuggled to Bangladesh. Who do you want to save?" he said, attacking the Chief Minister Mamata Banerjee.

A mob of over 1 lakh people assembled by "stoking communal passion" but the state government took no action while provocative leaflets were distributed,  Siddharth Nath Singh said.

NIA has arrested over 15 people across the country and all of them are connected to the fake-currency racket linked to Malda, he said, adding that the agency was about to "bust" it.

"Under the cover of communalism, it (violence) was a conspiracy to burn records kept in the police station," he alleged.

However, the Mamata Banerjee government has said that it occurred on account of some issues between the BSF and the locals in Malda district on January 3.

A team of BJP MPs was on Monday denied permission to visit violence-hit Kaliachak which drew a sharp attack from the party which accused Chief Minister Mamata Banerjee of playing "vote bank" politics and said it will take the matter to the President.