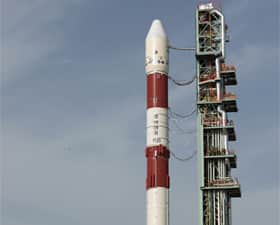 Addressing the scientists at Sriharikota Space Center, PM Narendra Modi congratulated the scientists for the successfull launch. He said, "I feel specially privileged to witness this event in person".

This is a "global endorsement of India`s space capability", said PM after the successful launch of an Indian rocket that carried five foreign satellites.

Filled with pride over PSLV-C23`s successful launch, Modi said, "The event fills every Indian`s heart with joy and pride".
Stressing that space technology is for the common man and not just for the elite, PM Modi urged Indian space scientists to develop a satellite for the South Asian Association for Regional Cooperation (SAARC) nations.

Modi also urged the Indian Space Research Organisation (ISRO) to expand the footprint of its navigation systems to all of South Asia.

He said the Indian navigation system will be in place by 2015.

"India has the potential, to be the launch service provider of the world. We must work towards this goal," he added.

Encouraging the young scientists Modi said, "Continued progress in space must remain a national mission. We must keep enhancing our space capabilities".

Further, emphasising on the need for technology,he said, "Technology is central to Development. It touches one and all, and is an important instrument of our national progress".

After a perfect lift off from the First Launch Pad in Satish Dhawan Space Centre here at 9.52 AM witnessed by Modi, Indian Space Research Organisation`s workhorse Polar Satellite Launch Vehicle PSLV-C23 placed all five satellites into their intended orbits, one after the other between 17 and 19 minutes after liftoff, in textbook precision.
Speaking to ANI, former ISRO chairman Madhvan Nair said, "PSLVC-23 launch has proven to be one of world’s most reliable space launch vehicle".

Union Minister of State with Independent Charge for Power, Coal and New & Renewable Energy Piyush Goyal extended his gratitude to the team at ISRO for the successful launch of PSLV-C23.

Events like these fill the hearts of 125 crore Indians with immeasurably joy and make us all immensely proud. Jai Hind!

The MP from Ghaziabad tweeted:

Congratulations to the team at ISRO for the successful PSLV launch!

Though the Mission Readiness Review Committee and Launch Authorisation Board had on Friday cleared the launch, the launch time was rescheduled to 9.52 AM today, a delay of three minutes, attributed to "probable space debris" coming in the rocket`s way.

The five satellites are from four countries - France, Germany, Canada and Singapore.

Besides its primary payload of 714 kg French Earth Observation Satellite SPOT-7, PSLV C23 carried and placed in orbit 14 kg AISAT of Germany, NLS7.1 (CAN-X4) and NLS7.2 (CAN-X5) of Canada each weighing 15 kg and the 7 kg VELOX-1 of Singapore.

French satellite SPOT 7, identical to SPOT-6, which ISRO had launched in 2012, would be placed diametrically opposite to SPOT-6, forming part of the existing Earth observation satellite. European space technology company Airbus Defence and Space has built SPOT-7.

The five satellites were launched under commercial arrangements that ANTRIX (ISRO`s commercial arm) entered into with the respective foreign agencies.