Mirabai Chanu, who won the silver medal in the women's 49kg category on Saturday, was seen hugging her mother Saikhom Ongbi Tombi Leima and her father Saikhom Kriti Meitei with tears rolling down her face as security guards formed a ring around her. 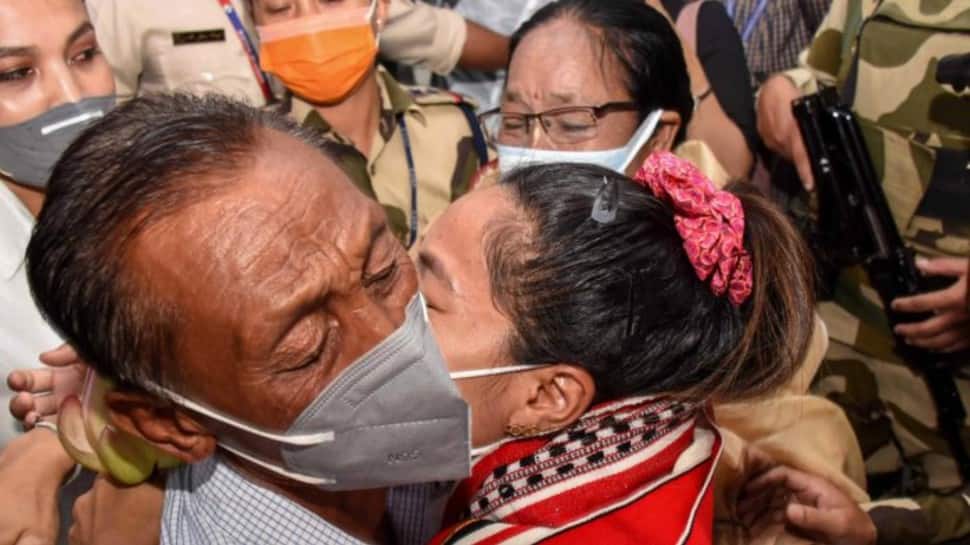 It was an emotional homecoming for newly-crowned Olympic silver-medallist Mirabai Chanu, who broke down on meeting her mother in Imphal on Tuesday (July 27) before being felicitated by Manipur chief minister N Biren Singh at the airport.

A stringent training regimen after the 2016 Rio Games had limited Chanu's visits to the home for the past five years.

Chanu, who won the silver medal in the women's 49kg category on Saturday, was seen hugging her mother Saikhom Ongbi Tombi Leima and her father Saikhom Kriti Meitei with tears rolling down her face as security guards formed a ring around her.

The now-famous gold earrings, shaped like the Olympic rings, that Chanu sported at the Games were a gift from her mother who sold her own jewellery for them five years ago ahead of the Rio Games in the hope of bringing the weightlifter luck.

The 26-year-old hails from Nongpok Kakching village, which is around 25km from here.

From the airport, Chanu went to attend a Manipur state government felicitation, which was hosted by the chief minister, who handed her a cheque of Rs 1 crore and appointment letter of Additional Superintendent of Police (Sports).

Just after Chanu won the silver in the Tokyo Olympics, Biren had announced Rs 1 crore as reward for her achievement and the post of additional SP in Manipur Police for her.

Chanu’s parents, her childhood coach Anita Chanu and some members of Biren’s council of ministers attended the felicitation function. After that, Chanu left for her native village.