The duo's arrest clearly shows that the noose around Rhea Chakraborty is tightening, and there is a possibility that she would also be arrested by the NCB, which has already summoned her for questioning on Saturday. 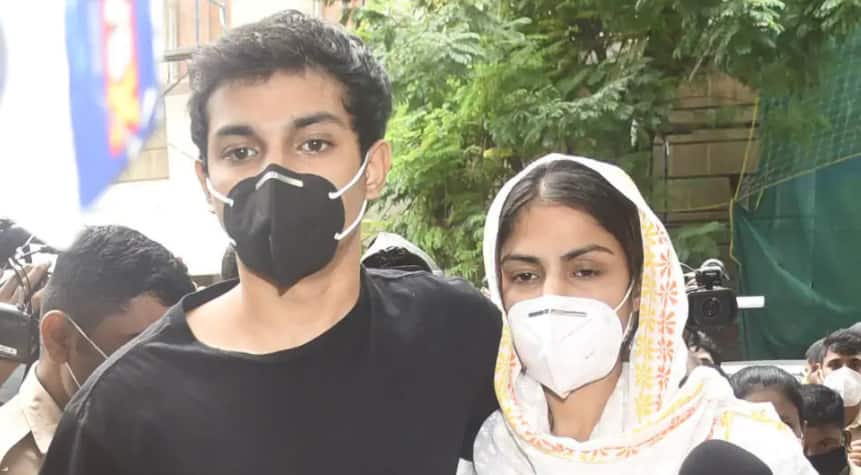 New Delhi: Probing the drug angle in the death of Sushant Singh Rajput, the Narcotics Control Bureau on Friday (September 4) night arrested Rhea Chakraborty's brother Showik and the Bollywood star's house manager, Samuel Miranda. The duo was arrested after 10 hours of questioning. They will be produced before a Mumbai court tomorrow (September 5).

The duo's arrest clearly shows that the noose around Rhea Chakraborty is tightening, and there is a possibility that she would also be arrested by the NCB, which has already summoned her for questioning on Saturday.

According to sources, Showik has confessed to NCB that he used to buy drugs for Sushant Singh on the behest of his sister Riya through Samuel Miranda.

Sushant's house manager Samuel Miranda has also told NCB that he used to arrange drugs, named Budd, at the behest of Showik for Sushant. The digital records of as many as 12 financial transactions between Samuel Miranda and Showik are there. Rhea Chakraborty's credit card was also used for several transactions.

Talking to DNA, Mumbai's eminent criminal lawyer Ujjawal Nikam said that there is a possibility that Rhea Chakraborty can be arrested. The drug angle in the Sushant Singh Rajput case is likely to provide the intention or motive behind providing drugs to the Bollywood star, who was found dead at his Bandra flat on June 14.

Nikam said that in this case there are no eyewitnesses, therefore circumstantial evidence would play a key role in establishing the chain.

We need to understand why Rhea Chakraborty can be arrested. The first big reason is that Rhea is accused of giving drugs to Sushant Singh, and the same has been confirmed through's Showik Chakraborty's interrogation. On the basis of these grounds, the NCB may arrest Rhea.

The CBI can also arrest Rhea because she is accused of making Sushant a drug addict. Sushant Singh's family has accused Rhea of using Sushant's money. It is alleged that she used Sushant's money for buying drugs for herself and meet other requirements of her family.

Sushant Singh's family has also alleged that he was separated from his family due to Riya Chakraborty. On August 27, Sushant's father, KK Singh stated that Rhea Chakraborty poisoned his son and should be arrested.

He said, "Rhea mere bete ki hatyarin hai, drugs deti thi, giraftar kari jayi (Rhea is the murderess of my son, she used to give him drugs and must be arrested)."

KK Singh further stated that Rhea was giving poison to Sushant for a long time, adding "I request CBI to immediately arrest Rhea and her associates."

The updates so far in the Sushant Singh case are given below:

1. 5 people have been arrested so far in the alleged drug connection in the Sushant Singh Rajput case

3. Showik Chakraborty has confessed to buying drugs for Riya Chakraborty

4. Showik told NCB that he used to get drugs from Samuel for Sushant at Riya's behest

5. Prior to arresting them, NCB separately interrogated Showik and Samuel Miranda; they were also questioned face to face

6. During their interrogation, NCB presented evidence of chats on mobile in front of the duo

So far, 7 people have been arrested in the case related to drugs and two of them have been granted bail.

Samuel Miranda earlier told the Mumbai Police and CBI that Sushant Singh's sister and her husband Siddharth had appointed him as a house manager of Sushant. Samuel previously worked on a Royal Caribbean cruise, and after leaving the job, he got this job through a consultancy firm. His job was to manage the house and for that, he used to get a monthly salary of Rs 80,000.

Notably, the NCB is currently headed by Rakesh Asthana, who has also been the special director of CBI. The drug connection of the Sushant Singh case is being investigated under his supervision.

Earlier in the day, the NCB carried out searches at the residences of Showik and Miranda. The NCB also seized Showik`s laptop and mobile phone. NCB sleuths, accompanied by police officials, raided the residence of Showik Chakraborty in Santa Cruz (West) and Miranda's house in suburban Andheri (West) from 6:30 am. Showik lives with his sister Rhea.

Both Showik Chakraborty and Miranda, who is Rajput's house manager, were handed over the summons to join the investigation during the search and were brought to the NCB's zonal office in the Ballard Estate area.

NCB is the third Central agency to join the probe into the death of Sushant, after the Central Bureau of Investigation (CBI) and the Enforcement Directorate (ED).

On August 26, the NCB registered a case as the ED wrote to it about the drugs angle, naming Rhea, her brother, talent manager Jaya Saha, Sushant`s co-manager Shruti Modi, and Goa-based hotelier Gaurav Arya under various sections of the Narcotic Drugs and Psychotropic Substances Act.

On the intervening night of August 27-28, the agency carried out searches in Mumbai and arrested Abbas Lakhani and Karan Arora, seizing `bud` (curated marijuana) from their possession. There were a few mentions of `bud` in purported social media messages between people involved in the case.

On August 19, the Supreme Court had asked the Central Bureau of Investigation to investigate the case related to the actor`s death, while holding that the FIR registered in Patna was legitimate. The FIR in Patna was registered on a complaint filed by the actor`s father KK Singh.

The single-judge bench of Justice Hrishikesh Roy had observed that the Bihar government was competent to recommend transferring the case to the CBI. It had also asked the Mumbai Police to hand over all the evidence collected so far in the case to the CBI.

The CBI has registered an FIR against Chakraborty and others in connection with the actor`s death after the Centre accepted the Bihar government`s recommendation to transfer the probe in the matter from Patna.