Ekta Kapoor on marriage: Can't give life's remote to anyone else 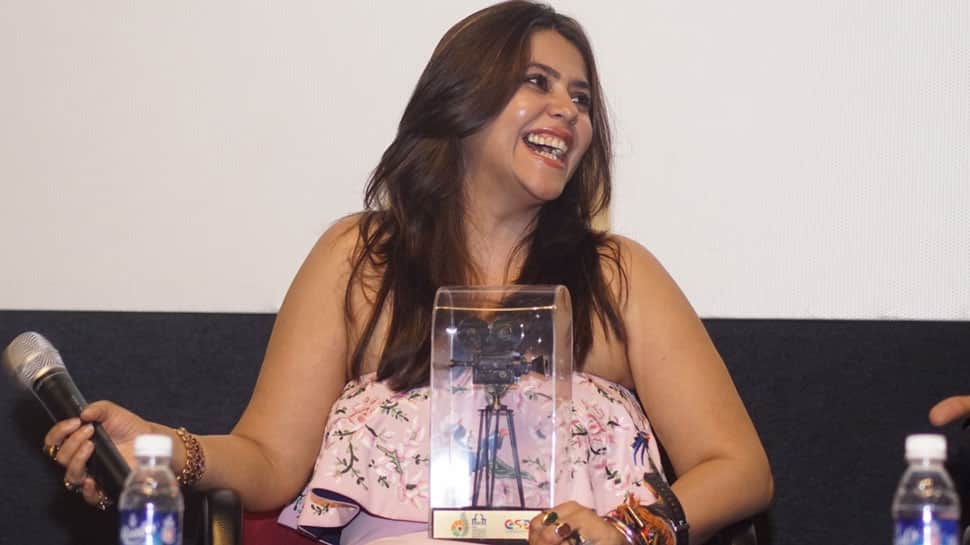 Mumbai: Producer Ekta Kapoor, who is gearing up for the release of her next production "Fittrat", opened up on her personal life saying that she cant give the remote of her life to anyone else. She also added that she is in a happy space and she doesn't understand how marriage is considered the only thing for personal happiness.

Ekta Kapoor was interacting with the media at the trailer launch of "Fittrat" along with cast members Krystle D'Souza, Anushka Ranjan, Aditya Seal and the show's director Santosh Singh on Wednesday in Mumbai.

Ekta Kapoor has made her mark as one of the leading producers in film, television and the digital platform. Asked if there was any point in her life when she felt deprived, she said: "All of us have had moments where we wanted to buy something and we have been conditioned in a certain way. This show is about conditioning versus individuality. We are all conditioned to believe that one day a Prince Charming will come in our lives and he will raise our standard of living."

Ekta said that people still ask her when she is going to get married. "Till now, people ask me ‘when are you going to settle down in life?' I don't understand how much should I achieve more to feel settled down. I think it's considered that women have to find someone to sort themselves out. In my own personal life, I have been told many times that ‘this career is okay but you will have to get married to find personal happiness'," she said.

Ekta added: "I think I am in a pretty happy space because the happiness of a person cannot be decided by other people. It has to be decided by me. If I have to get something for myself, then I have to be responsible for it and not another person. I can't give the remote of my life to anyone else. If I have to buy myself shoes or clothes, I have to make a show like this and I have to be responsible for it and it is time we tell our girls that. There is one line in the show that goes, 'somebody will not buy you gold, the gold is within you'."

In January 2019, Ekta Kapoor welcomed a baby boy via surrogacy. Ekta named him Ravie Kapoor after her dad Jeetendra, whose real name is Ravi Kapoor.

Talking about her upcoming show, "Fittrat", Ekta said: "Basically this was a film script we had planned years ago. We have all grown up on the quintessential ‘Pretty Woman' (1990) moments. You enter a shop, you can't buy the shoes and the rich man comes in your life and buys them for you. But it's 2019, so you have to think ahead, so the story moves from the girl who can't buy shoes to a rich guy who comes in and buys the shoes and then she realises that those shoes pinch because shoes bought by someone else usually pinch. So, the journey of buying her own shoes begins for the girl. The show is in four stages. I think contemporary women should know it is time we become our own heroes, so I think it's the right time for us to tell the story."

Produced by Ding Entertainment, the web series will stream from October 18, on ALTBalaji and ZEE5.