Kareena Kapoor is a vision in white, says 'it's amazing to walk the ramp after two babies' at Lakme Fashion Week

Kareena Kapoor Khan featured as the showstopper at Lakme Fashion Week and walked the ramp seven months after the birth of her second son Jeh. 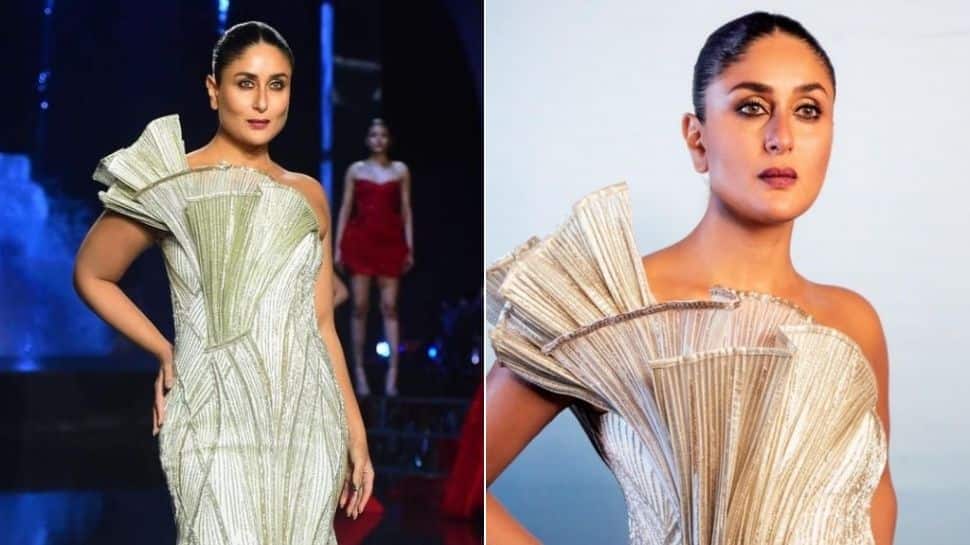 New Delhi: Bollywood Begum Kareena Kapoor Khan floored audiences at her first ramp walk seven months after giving birth to her second son Jehangir. She looked absolutely gorgeous in a Gaurav Gupta designed dress that was inspired by the oceans.

He had showcased his collection of 'Demi-Couture' which was reminiscent of aquatic life, corals and jellyfish. It was made out of reused materials promoting an environmentally conscious and sustainable way of clothing.

Kareena looked mesmerising in a frilled-neck, mermaid-fitted, white, shimmery dress as she walked the runway as the showstopper culminating the 5-day glamorous event. She had paired her elegant outfit with a maroon-red lipstick and hair tied back into a neat, slick bun.

Take a look at her stunning outfit:

In an interview after the show, Kareena revealed that she felt amazing after walking the ramp after the birth of her two children.

She said, "A great honour to be walking after my second baby, it's just been seven months and I feel amazing to have walked the ramp for Gaurav. The last time, I walked for him was in 2015, that was much before Taimur and Jeh and now after two babies, I've walked for him again."

On the work front, she recently finished shooting for 'Laal Singh Chadda'. The film, which was earlier scheduled to be released on Christmas, will now be released in February 2022. She also has Karan Johar's period-drama 'Takht' in her kitty.