Shah Rukh Khan's son Aryan Khan who was arrested on Sunday has been linked to illegal drugs such as cocaine, MD and MDMA according to latest reports.

In the latest development on the case, it has been revealed that Aryan was arrested for the involvement in consumption, selling and purchase of contraband.

As per the arrest memo confirmed by top sources, he was arrested in connection with the seizure of 13 grams of Cocaine, 5 grams of MD, 21 grams of Charas and 22 pills of MDMA and 1.33 lakhs in cash.

Take a look at his arrest memo here: 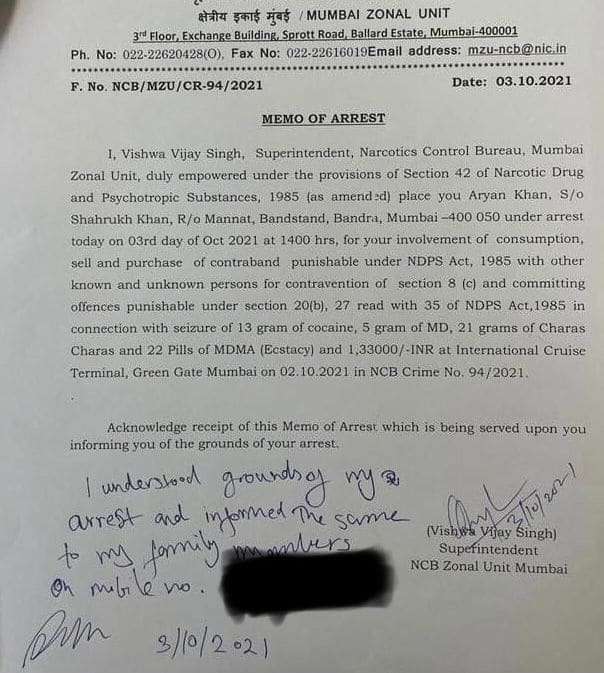 It has also come to light that one of the accused was carrying a banned substance (cocaine) hidden in an eye lens cover as per our sources.

For the unversed, On Sunday (Oct 3), Shah Rukh Khan and Gauri Khan’s son Aryan Khan and seven others were detained by Narcotics Control Bureau (NCB) in a drug case after a raid at a party.

According to reports, the detainees were partying in a cruise ship that was bound to go from Mumbai to Goa.

After receiving a tip-off, the officials of NCB Mumbai conducted a raid on the cruise on October 2. During the operation, as per the information, various drugs like MDMA/ Ecstasy, Cocaine, MD (Mephedrone) and charas has been recovered from the suspects.

A total of eight persons including two women have been apprehended and their role is being investigated in relation to the said recovery of the drugs. NCB Mumbai has registered Crime no. Cr 94/21 in this matter. Further investigation is underway.

The raid was led by NCB’s zonal director Sameer Wankhede on Saturday evening.

"During the operation, the suspects were searched and different drugs were recovered from them, which they had hidden in their clothes, undergarments and purses (by women),” NCB officials told PTI.

The detainees will be produced in a court later in the day after the legal formalities get over, the NCB official had shared.