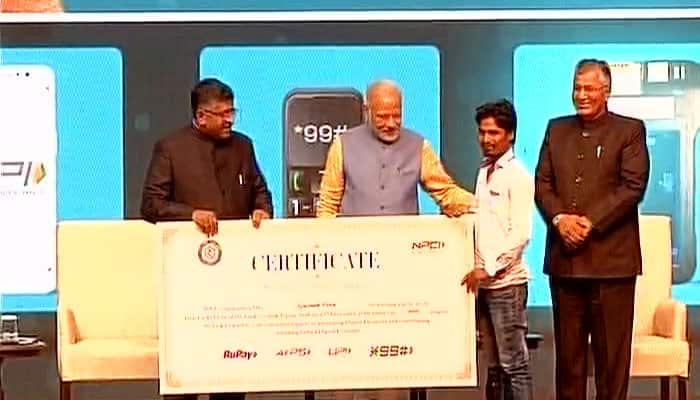 The mobile app called 'Bhim' stands for Bharat Interface for Money and is available for download from Android phones. The name of the app 'Bhim' is after Bhim Rao Ambedkar, said PM Modi, adding that the 'Bhim' app will empower poorest of the poor.

"In 2 weeks will make one more accomplishment, it's security is being worked on. It will empower BHIM; you'll only require your thumb to pay", added PM Modi. Modi said that this app will empower poorest of the poor. He also expressed that the thumb of the poor will become his new identity now.

He also announced  the lucky draws for Lucky Grahak Yojana, aimed for the consumers and Digi Dhan Vyapari Yojana, targeted for the small businesses, merchants and traders.

Those keen to know the names of winners will will have to visit  https://digidhan.mygov.in/ and fill in your registered mobile number to see the name of visitors. There are 70229 winners. Winners will receive the winning amount in their bank accounts.

Earlier in December,  the government had announced two schemes: Lucky Grahak Yojana, aimed for the consumers and Digi Dhan Vyapari Yojana, targeted for the small businesses, merchants and traders.

Prizes are given to those who make transactions of more than Rs 50 and less than Rs 3000, so that the poor can win. Modi added that these two initiatives, the Lucky Grahak Yojana and DigiDhan Vyapar Yojana are a Christmas gift to the nation, added PM Narendra Modi.

PM said that a mega draw will take place on 14th April, the birth anniversary of Dr Babasaheb Ambedkar.

Modi added, "I am thankful to the media as this has helped Govt formulate schemes and take up initiatives to empower the poor".

He also distributed prizes to those who have made contributions to promote digital payments in the country.

The idea is to provide cash based incentives to those consumers and traders who are still reluctant to go cashless, will now attempt to ditch cash and adapt the new-age digital economy.

The first DigiDhan Mela (fair) was organised in Gurugram, Haryana, on Monday and was inaugurated by Haryana Chief Minister Manohar Lal Khattar.