The second leg of the semifinal will be played at Margao on December 15. 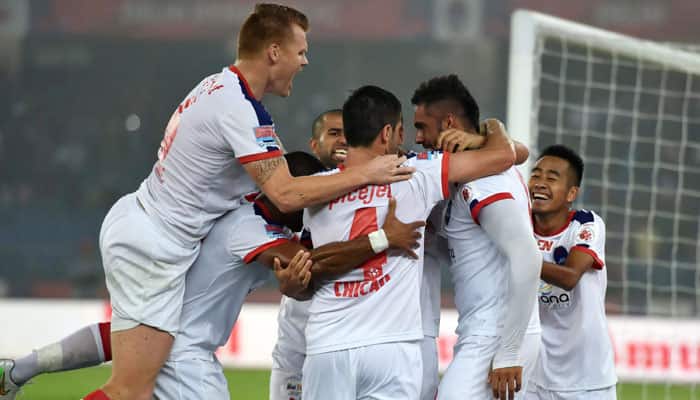 New Delhi: Local lad Robin Singh struck the winner as Delhi Dynamos turned the tables on FC Goa by beating them 1-0 in the first leg semifinals of the Indian Super League football here on Friday.

Robin scored in the 42nd minute in front of 23,000-odd home supporters at the Jawaharlal Nehru Stadium to hand Delhi an advantage over Goa in the two-leg semifinals. The second leg of the semifinals will be played at Margao on December 15.

Today's win broke Delhi's four-match losing streak against Goa in the ISL. They have lost both their league matches in ISL 1 and 2, including the 2-3 defeat this season on December 6 here.

Delhi, who had finished fourth after the league phase, were the dominant side for most part of the match, having far more possession and more shots at the opposition goal.

League phase toppers Goa, coach by legendary Brazillian Zico, surprisingly failed to match up to their performance last Sunday when they exploded in the second session to overturn a 0-2 first half deficit to emerge 2-3 victorious.

They sat back for long part of the first session, looking to score on the break only to be denied by a rock solid Delhi backline --

the best among the eight teams this season -- marshalled by John Arne Riise.

The match started on an even keel with both sides looking to settle down and tasting each other. Delhi had slightly better possession in the first 15 minutes. But soon they got to a dominant position and had nearly 90 per cent possession in the next 15 minutes and began to threaten at Goa goal.

Former French international and Chelsea star Florent Malouda was in the thick of things on many occasions, providing assists to his team-mates though he failed to score his first ISL goal today also when he got the chance himself.

In the the 41st minute, he did some neat footwork to get past his marker on the right, and squared the ball towards Dos Santos but the Brazilian could not keep the ball on target.

But in the next minute, India international striker Robin scored the goal which separated the two sides by beating Goa captain and Brazillian 2002 World Cup winner Lucio in an aerial duel.

Robin put the ball into the net by connecting an Anderson Chicao pin-point cross as he nodded a powerful header before Lucio could reach upto it past a hapless goalkeeper.