In-form Gladbach want to become only the second team this season to take German league points off Bayern. 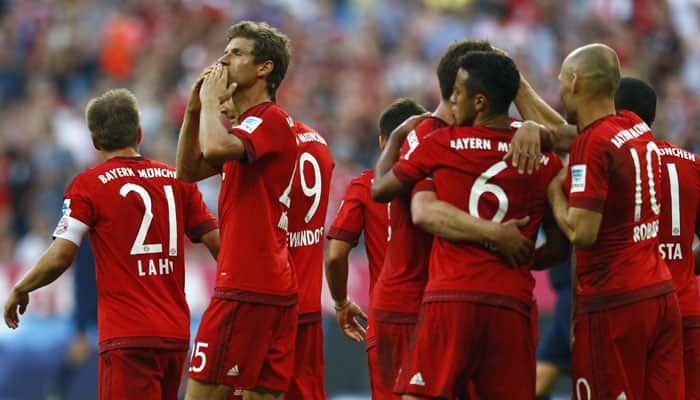 Berlin: Borussia Moenchengladbach captain Granit Xhaka says his side has a chance of proving to the German league on Saturday that runaway leaders Bayern Munich can be beaten.

Xhaka and Gladbach`s stars are relishing the prospect of testing themselves against Germany`s top team at Borussia Park with their side fourth in the table while Bayern are already eight points clear.

"It`s clear Bayern are at a different level at the moment, where, if we`re being honest, no other team in Europe or the world is at," the Swiss midfielder told German Sky Sports.

"But Bayern are also beatable. Every team is beatable, you just have to find the right solutions to break them down.

"On Saturday, we will of course try everything to be successful and above all else, we are a power at home."

In-form Gladbach want to become only the second team this season to take German league points off Bayern.

Pep Guardiola`s Munich are running away with the Bundesliga title after taking 40 from a maximum 42 points with 13 wins from 14 matches and only a goalless draw at Eintracht Frankfurt in October blots their league copybook.

Gladbach are unbeaten in their last nine league games under head coach Andre Schubert and worked hard to protect their record by fighting back from 3-1 down at bottom side Hoffenheim last Saturday to claim a 3-3 draw.

Schubert says his side have nothing to fear from taking on all-conquering Bayern, who have lost just once this season when Arsenal beat them 2-0 in London in the Champions League.

"Of course, we will try and find the right solutions against Bayern," said Gladbach`s head coach.

"We have the necessary fitness, the huge desire and the heart. It will be exciting to see if we can surprise them."

Bayern have just five games left before the winter break starts and Germany forward Thomas Mueller has scored in each of his last five games in the famous red shirt.

Director of sport Matthias Sammer has described him as `irreplaceable` amidst to UK media reports Chelsea want to sign him to potentially replace Diego Costa.

Munich were buoyed by the news both France winger Franck Ribery and Spain midfielder Thiago are back in training, but neither will be fit for the Gladbach game.

Second plays third on Saturday evening when Borussia Dortmund are at Wolfsburg with Gabon striker Pierre-Emerick Aubameyang looking to add to his tally of 17 goals as the league`s top scorer.

The Dortmund star has only failed to score in two of his 14 league games so far this season and has 25 goals in all competitions.

There will be plenty of attention on Dortmund captain Mats Hummels, who started on the bench in last Sunday`s 4-1 trouncing of strugglers Stuttgart.

Bottom side Hoffenheim will be looking to build on the point they won at home to Gladbach when they travel to mid-table side Ingolstadt on Saturday.
Fixtures (All times 1330 GMT unless stated