Hiten and Priyank came dressed up as women, courtesy Hina Khan who helped them get ready. Hiten became a saree-clad woman with Ghunghat. Priyank, wore a rather hot swimsuit! 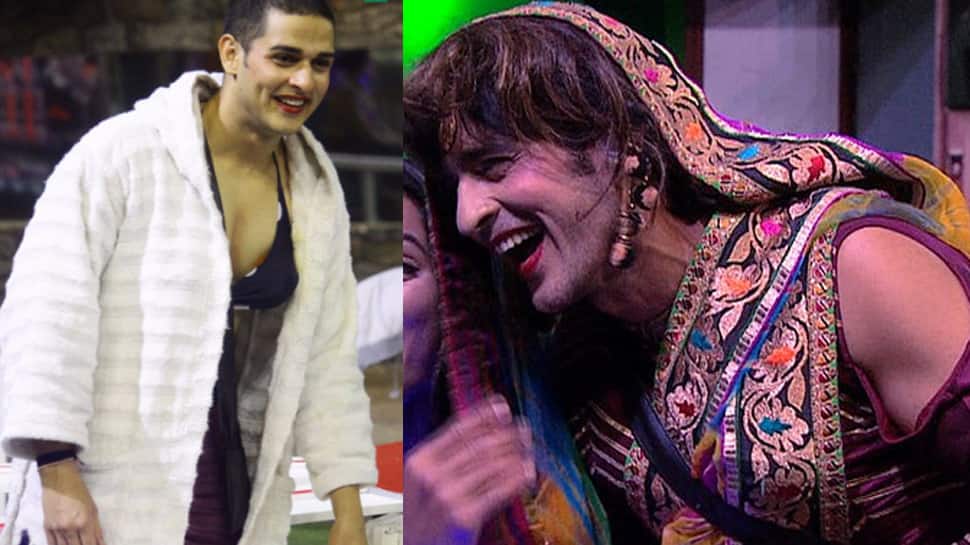 New Delhi: Bigg Boss season 11 day 72 began with heated arguement between Akash and Vikas. In the last episode, we saw how Akash was upset when Vikas was trying to make him get angry as a part of the task.

Today, the task continued and it was team Vikas' turn to be at the receiving end. The first emotion was Anger and Hina targeted Vikas. Then Priyank followed suit and said whatever he could to make Vikas angry.

After Vikas, Hina and Priyank targeted Shilpa and tried their best to make the actress angry. However, Shilpa, controlled her emotions as stood as expressionless as a robot.

Priyank, in order to win the task and make Vikas angry, said that Vikas had approached Benafsha and asked her to form a love angle. When the buzzer rang, Vikas was seen expressing his disappointment over Priyank's lie.

Next emotion to be evoked was 'Crying' and Priyank and Hiten came up to Vikas. Priyank told Vikas that he loves him and that he wants him to win the show, hoping to make the latter cry. Priyank also told everyone that Vikas had done a lot for him and had time and again proved to be a guide.

The highlight of today's episode was when the contestants had to evoke laughter in the rival team. Hiten and Priyank came dressed up as women, courtesy Hina Khan who helped them get ready. Hiten became a saree-clad woman with Ghunghat. Priyank, wore a rather hot swimsuit!

On the other hand, Akash did a dance that was considered as vulgar by the inmates.

Despite of their efforts, Hina's team failed to evoke the desired result.

As soon as the task's duration got over, Vikas gave a big hug to Hiten and said that he is proud of him.

Then, the emotion of Anger came up again and Arshi and Vikas were at the radar.

Hiten was asked to announce the result and Puneesh announced that Vikas' team had won by a margin of 50 points.