China's annual Parliament session commenced on Friday (May 22) at the Great Hall of People in Beijing amid coronavirus pandemic that has claimed 4,634 lives in the Communist nation where the deadly virus emerged in December 2019. 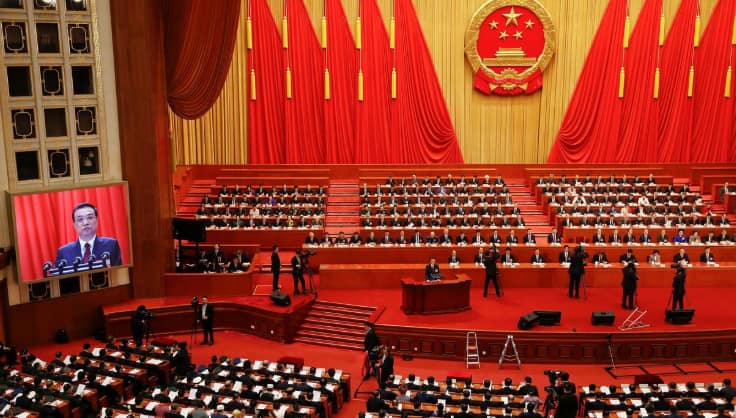 New Delhi: China's annual Parliament session commenced on Friday (May 22) at the Great Hall of People in Beijing amid coronavirus pandemic that has claimed 4,634 lives in the Communist nation where the deadly virus emerged in December 2019.

The Communist Party of China, generally, sets the year-long agenda at this meeting, but due to the coronavirus crisis, the summit is happening two months late as it was earlier scheduled in March. The meet is reportedly organised in a hurry to tell the world that everything is normal in China. Prior to the meeting, five big points have emerged that you should know.

The first point is that China has declared victory over the coronavirus; Secondly, China is all set to introduce a new law to control Hong Kong; Third is that China will not set any GDP target for this financial year; Fourth is related to China's increased defense budget; while the Fifth decision is to hike its expenditure to save the economy.

All these announcements are simply to convey the message that the Communist Party in China is all-powerful and that COVID-19 has failed to make any difference. Further analysis is to understand the agenda of Chinese President Xi Jinping.

Chinese Premier Li Keqiang said "I would like to point out that we have not set a specific target for economic growth this year," while submitting his 23-page work report to the NPC, China's legislature.

In the past two weeks, about 46 new cases of coronavirus have been reported in different cities of China, besides the emergence of new clusters in many areas, exposing China's claim of victory over COVID-19.

The other agenda of China is to advance its expansionist policy through new security legislation for Hong Kong. Once this law is passed, China's control over Hong Kong will become stronger and it will easily suppress the anti-government voices.

The meeting also gave a subtle message to Taiwan, asserting its claim over it. Li Keqiang's speech clearly stated the expansionist agenda of China stating that it wants to take away the autonomy of Hong Kong and Taiwan and will not shy away from using force to achieve this.

The third important point emerged that China for the first time since 1990, decided not to set any specific target for this year's GDP, citing uncertainties arising out of the COVID-19 pandemic, the slowdown of the Chinese and global economies and the decline in international trade.

Last month, a Chinese Brokerage Firm had claimed that the unemployment rate in China reached 20% but the report was later withdrawn. The official figure has put China's unemployment rate at 6%. This apparent fudging of data is like showing the data on coronavirus patients. China, however, vowed to revive its economy but no one knows when and how it will do it.

The fourth important point that emerged from this meeting is that China has increased its defense budget amidst the sinking economy. The second-largest military spender after the US, China hiked its defence budget by 6.6 percent to USD 179 billion, nearly three times that of India.

China, which has the world's largest military of two million troops, will continue to lower its defence budget growth rate to 6.6 percent in 2020, according to a draft budget report presented today to the National People's Congress (NPC).

China has also increased its activity in the South China Sea, besides issuing threats to Taiwan of military action. The Chinese military also invited clashes with India's forces deployed on the border.

The fifth point is linked to China's economy, as it has vowed to create 90 lakh new jobs. Last year, China had set a target of creating 10 million new jobs. This means that the Communist nation will create 2 million fewer jobs this year.

For the first time, China has decided to issue Treasury Bonds to raise money from the market. It gives the impression that the world's second-largest economy has a shortage of cash, but this can not be stated as China never tells the whole truth.

Chinese banks are reported to be under great pressure as China has given loans to many countries, but is facing uncertainty over the repayment. Amid this situation, big slogans were raised at the NPC but there was no strong announcement.

Despite facing domestic as well as international pressures, President Xi Jinping today conveyed his commitment to fulfilling the goals. The challenges of falling economies, unemployment, rising poverty, and cronavirus pandemic are staring at President Xi, who needs to tackle them successfully to retain his political stature.

In the year 2018, the Communist Party of China had abolished the limit of Jinping's presidency and paved the way for him to remain a lifetime President. He became the Supreme Commander and was being compared with the founder of China, Mao Zedong, but in the past two years things have changed.

President Xi is still the most powerful leader in China, but the deadly virus has dented his image, as he is globally held responsible for the COVID-19 crisis.