Chow Tsz-lok, 22, an undergraduate at the Hong Kong University of Science and Technology (UST), died of injuries he suffered early on Monday when he fell from the third to the second floor of a parking lot during a police dispersal operation. 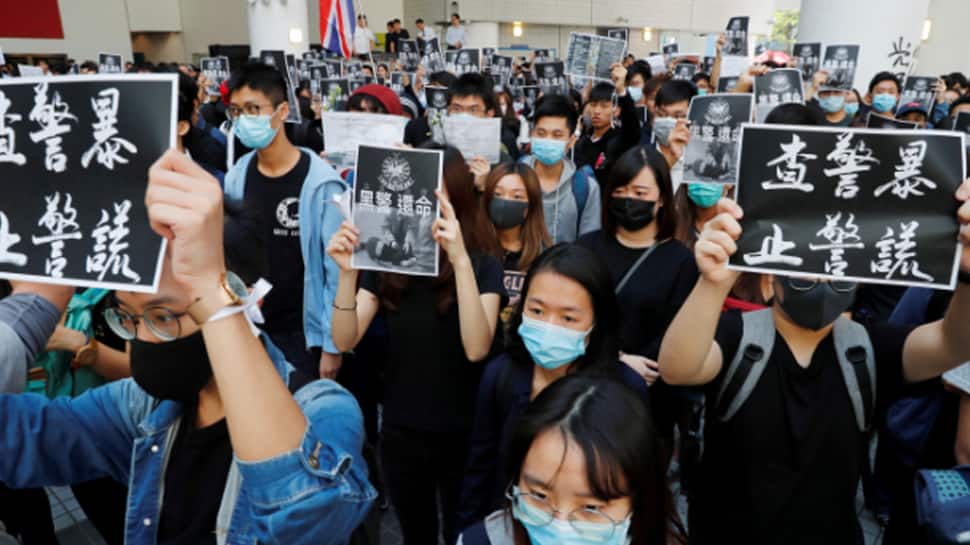 HONG KONG: A student at a Hong Kong university who fell during protests over the weekend died on Friday, the first student death in months of anti-government demonstrations in the Chinese-ruled city that is likely to be a trigger for fresh unrest. Chow Tsz-lok, 22, an undergraduate at the Hong Kong University of Science and Technology (UST), died of injuries he suffered early on Monday when he fell from the third to the second floor of a parking lot during a police dispersal operation.

Chow`s death is expected to spark fresh protests and fuel further anger at police, who are already under pressure amid accusations of excessive force as the city grapples with its worst political crisis in decades. UST students trashed a campus branch of Starbucks, part of a franchise perceived to be pro-Beijing, and rallies are expected across the territory as dusk falls, a traditional time for violence to pick up.
"Condemn police brutality," they wrote on the restaurant`s glass wall.

Demonstrators had thronged the hospital this week to pray for Chow, leaving flowers and hundreds of get-well messages on walls and notice boards inside the building. Students also staged rallies at universities across the former British colony. "Wake up soon. Remember we need to meet under the LegCo," said one message, referring to the territory`s Legislative Council, one of the targets of the protest rallies. "There are still lots of things for you to experience in your life."

Students and young people have been at the forefront of the hundreds of thousands who have taken to the streets since June to press for greater democracy, among other demands, and rally against perceived Chinese meddling in the Asian financial hub. The protests, ignited by a now-scrapped extradition bill allowing people to be sent to mainland China for trial, have evolved into wider calls for democracy, posing one of the biggest challenges for Chinese President Xi Jinping since he took charge in 2012.

Two pro-Beijing newspapers ran full-page ads, commissioned by "a group of Hong Kong people," calling for the lowest-tier Nov. 24 district council elections to be postponed, a move which would infuriate those calling for democracy. Protesters have thrown petrol bombs and vandalised banks, stores and metro stations, while police have fired rubber bullets, tear gas, water cannons and, in some cases, live ammunition in scenes of chaos.

In June, Marco Leung, 35, fell to his death from construction scaffolding after unfurling banners against the extradition bill. Several young people who have taken their own lives in recent months have been linked to the protests.

Chow, an active netball and basketball player, according to his university peers, had been pursuing a two-year undergraduate degree in computer science. His death came on graduation day for many students at his university, located in the picturesque Clear Water Bay district on the Kowloon side of the harbour.

Hundreds of students, some in their black graduation gowns and many wearing now-banned face masks, held a silent gathering in the main piazza of the campus after receiving their degrees. Some were in tears. They later moved to a stage where the graduation ceremonies had been held. Chanting "Stand with Hong Kong", they spray-painted Chow`s name and pinned photos and signs of him on nearby walls.

"I can`t put a smile on my face thinking about what has happened," said Chen, a female graduate in biochemistry, who was wearing a formal gown and holding bouquets of flowers. Hong Kong`s government said in a statement that it expressed "great sorrow and regret" and that the crime unit was conducting a "comprehensive investigation" into Chow`s death.

At a separate event, around 1,000 people rallied in the city`s main financial district, home to top-brand stores and malls, banks and jewellery shops, to protest against alleged police brutality. Many held white flowers. "I am very sad over Chow`s death. If we don`t come out now, more people might need to sacrifice (themselves) in the future," said Peggy, an 18-year-old university student at the University of Hong Kong. She, like Chen, declined to give her full name because of the sensitivity of the issue.

Protests scheduled over the weekend include `Shopping Sunday` centred on prominent shopping malls, some of which have previously descended into chaos as riot police stormed areas crowded with families and children. Last weekend, anti-government protesters crowded a shopping mall in running clashes with police that saw a man slash people with a knife and bite off part of the ear of a local politician.
Hong Kong returned to Chinese rule in 1997 under a "one country, two systems" formula, allowing it colonial freedoms not enjoyed on the mainland, including an independent judiciary and the right to protest. China denies interfering in Hong Kong and has blamed Western countries for stirring up trouble.

Explainer: Is it illegal for Donald Trump or Congress to name the impeachment whistleblower?