Hundreds of police, including from anti-terrorism units, have been deployed around the Supreme Court building in central Madrid. 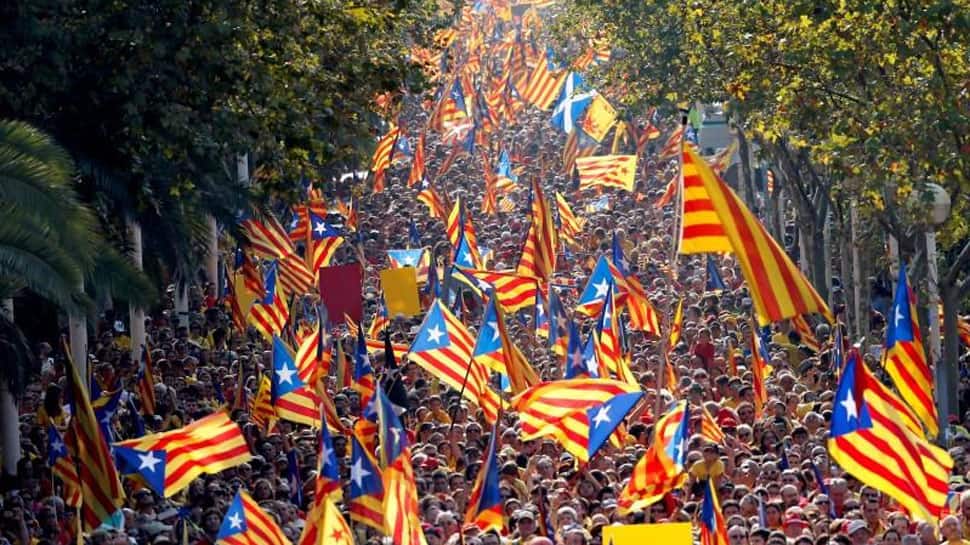 MADRID: Twelve Catalan secessionist leaders go on trial in Spain`s Supreme Court on Tuesday, charged for their role in a failed independence bid 16 months ago that deeply divided the country and triggered the biggest political crisis in decades.

Hundreds of police, including from anti-terrorism units, have been deployed around the Supreme Court building in central Madrid. The defendants, facing charges of rebellion and misuse of public funds, will not speak in court on the first day of the trial, which is reserved for procedural issues. Nine of the defendants have been jailed without bail since late 2017 and early 2018.

The attempt to declare Catalonia`s independence in October 2017 followed a referendum that had been carried out in defiance of a judicial ban, and angered much of the rest of Spain. There was shock at home and abroad when police used batons and rubber bullets on protesters on the day of the vote.

Supporters of the defendants say they are political prisoners and that the trial itself is political. "The world is looking at Madrid ... what they want is not to judge but to condemn on political reasons," Olivier Peter, a lawyer for one of the accused, told reporters on Monday.

The government rejects this, saying the defendants have broken the law and judges are handling the case without political interference, in line with the rule of law. Secessionists have called on Catalans to briefly stop work at midday on Tuesday in protest against the trial, and to join a rally in Barcelona in the evening. Another big demonstration is planned for Saturday and a general strike on Feb 21.

The political right organised a mass protest on Sunday in Madrid against any concessions by Socialist Prime Minister Pedro Sanchez to Catalan pro-independence parties. The centre-right party Ciudadanos has called another rally next Sunday in Barcelona "in defence of the Constitution".

The pro-independence head of the Catalan regional government, Quim Torra, who will attend the opening session of the trial, called for the acquittal of the defendants. The public prosecutor is seeking prison terms of up to 25 years.

The Geneva-based International Commission of Jurists, a human rights group of judges and lawyers, said the case risked restricting rights and could set a precedent. "Vague, broadly defined offences of sedition or rebellion risk violation of the principle of legality, as well as arbitrary and disproportionate interference with human rights," it said.

The trial starts as Sanchez`s minority government faces a vote on the 2019 budget on Wednesday for which it needs the support of Catalan parties. They have so far vowed to block the bill, citing Sanchez`s refusal to discuss independence, despite his efforts to ease tensions with the Catalans through talks. Failure to approve the budget is likely to prompt a snap parliamentary election this year.

North Korea may have made more nuclear bombs, but threat reduced: Study