PM blasted the ruling Telugu Desam Party for not remaining committed to its own ideology. 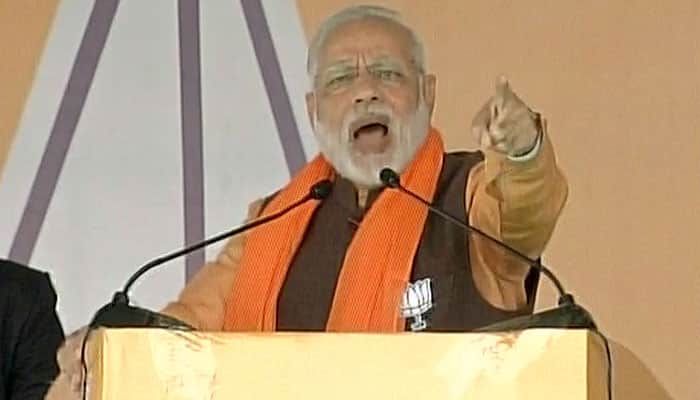 AMARAVATI: Prime Minister Narendra Modi Wednesday tore into the Chandrababu Naidu government, accusing it of indulging in scams and making friends with a "wicked" Congress while reaffirming his government's commitment to the welfare of Andhra Pradesh.

He blasted the ruling Telugu Desam Party for not remaining committed to its own ideology, and spreading "blatant lies" against the Centre.

PM Modi was addressing BJP workers from Kakinada, Narsapuram, Visakhapatnam, Machilipatnam, and Vizianagaram Lok Sabha constituencies through video conferencing as part of the 'Mera Booth Sabse Mazboot' initiative to strengthen the party organisation at the grassroots level ahead of the Lok Sabha polls next year.

"Late NT Rama Rao, who founded the TDP to promote the interests of Telugu people and to safeguard Telugu pride, always addressed Congress as 'dushta' (wicked).

"And today, those in power are treating it as 'dost' (friend) Congress. Do they want to say that NTR was wrong?" PM Modi said, launching a scathing attack on Naidu.

The TDP was part of the BJP-led NDA till a few months ago but walked out of the alliance over the Centre's refusal to grant special category status to Andhra Pradesh.

He said everyone saw what happened to the "grand alliance" in Telangana in the recent assembly elections.

The TDP had forged a four-party alliance with the Congress, CPI and the Telangana Jana Samithi for the polls.

"They were totally rejected by the people. The same is going to happen in AP," the prime minister said.

When party workers from Visakhapatnam and Vizianagaram referred to the "mischievous campaign" against the Centre by the Naidu government, Modi noted that truth was the biggest weapon that could dispel such falsehood.

"When lies are spread all around...Government machinery completely misused to spread falsehood...Then the biggest weapon will only be the truth. Truth, truth and only truth can defeat the tsunami of lies," PM Modi asserted.

"I am aware of what is going on in AP. I understand your pain. Do you expect the (TDP) government to go and tell people that they have not been able to fulfill any of their promises? They will naturally blame Modi," he said.

Had the TDP government done some work, it could have talked about it. But since it had nothing to show to the people, it only spoke "lies and indulged in scams", the prime minister said, lashing out at the former alliance partner.

Listing out what his government had done for the state in the last four years, the prime minister said close to Rs 20,000 crore was released as a resource gap and revenue deficit funding.

He said if the state government claimed it did not receive the money, then into whose pockets it had gone.

Over Rs 1,000 crore was released for the development of seven backward districts but the state government was not able to provide utilization certificates on time, he claimed, wanting to know why the funds were not utilized for the welfare of people.

The Polavaram irrigation scheme, he said, was declared a national project with 100 percent central government funding.

"We have so far released around Rs 7,000 crore for Polavaram. The state government was keen to be the executor of the work. We also accepted that. If CAG reports are to be believed, the state government has turned out to be inefficient in execution. Why are they not able to execute this project properly," he said.

No state in the history of India ever got as many institutions as Andhra Pradesh had in the last four years, he said, adding no previous central government did so much for the state.

"It does not matter what propaganda is spread against us. Our commitment to the people of AP is unshakeable. It becomes even stronger when such lies are spread," Modi asserted, and asked party workers to convince people about how those in power in the state were spreading "blatant lies".