The flood situation in Assam remained grim on Thursday with four more deaths reported from across the state taking the total death toll to 93. The deaths were reported from these four districts--Bongaigaon, Kokrajhar, Golaghat and Morigaon. 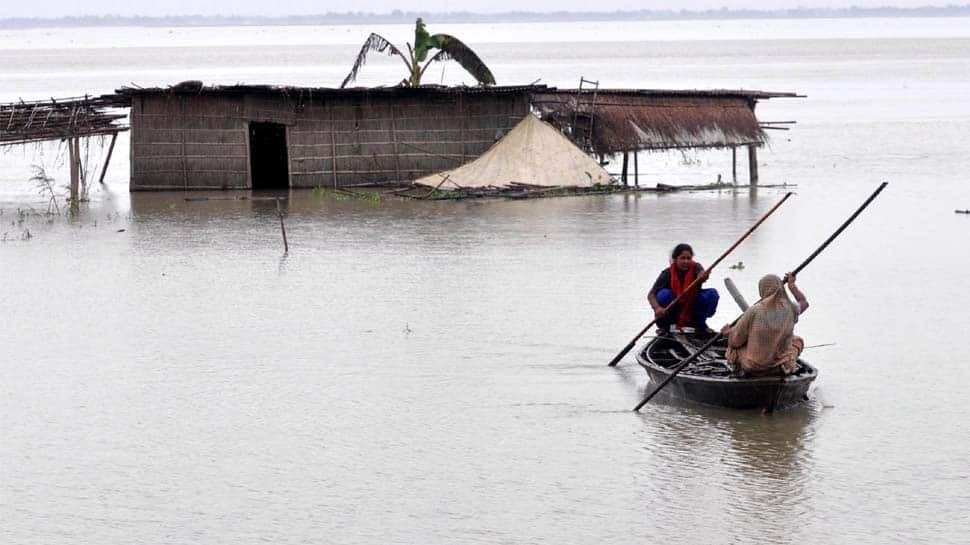 The flood situation in Assam remained grim on Thursday with four more deaths reported from across the state taking the total death toll to 93. The deaths were reported from these four districts--Bongaigaon, Kokrajhar, Golaghat and Morigaon.

So far, over 28 lakh people across 26 districts, of the state's 33 districts, have been affected in the flood-hit state. A whopping amount of 119,435 hectares of crops have been destroyed and 74 revenue circles affected. A total of 47,213 affected people have been evacuated and shifted to 286 relief camps across the state.

In the Kaziranga National Park, so far 123 animals have died and 150 have been rescued.

Governor Mukhi conducted an aerial survey of the flood-hit areas and said he would request the Centre to find a permanent solution to the problems of flood and erosion in the state. Chief Minister Sarbananda Sonowal also visited the areas affected by the deluge in Darrang and Kamrup districts.

After the aerial survey of the flood-hit areas of Baksa, Chirang, Bongaigaon, Kokrajhar, Goalpara, Dhubri and Udalguri districts, Mukhi asked the state government to reach out to every affected person and ensure that nobody goes hungry. Though rivers such as the Brahmaputra, Dhansiri, Jia Bharali, Kopili and Beki are the lifelines for the people of Assam, they need to be tamed during the monsoon season and for that, a long-term, exhaustive study is required, the governor said. He also asked the state government to ensure the safety of animals and provide food to those taking refuge on high lands.

As the state is battling against the twin problems of flood and COVID-19, Mukhi said in this extraordinary situation, every effort is being made to reach out to people to ensure that they adhere to all safety protocols so that the contagion does not spread. Meanwhile, Sonowal visited Rangia in Kamrup district, where he interacted with the inmates of a relief camp and took stock of the situation. The chief minister said the current wave of flood has severely affected several districts and claimed the lives of many people. He said the state is simultaneously battling against COVID-19, flood, erosion, storm, landslides and the Baghjan gas-well fire.

Sonowal said the government would not tolerate anomalies in flood relief operations, adding that strong punitive action would be taken against those indulging in corrupt practices. The chief minister also visited the flood-hit areas of Darrang district.