The Padma Shri Awardee is currently ranked at number 6 by the Badminton World Federation (BWF). 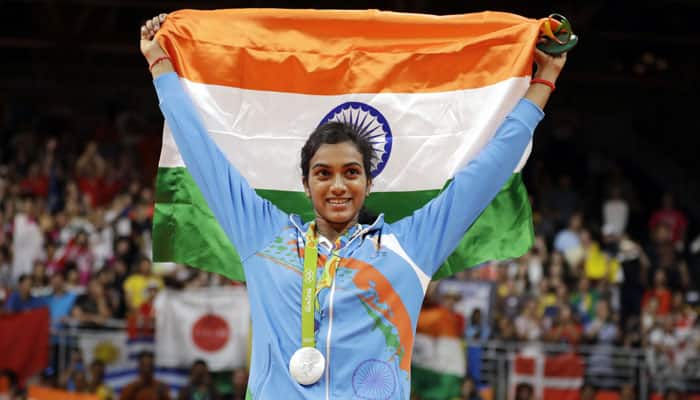 Star shuttler PV Sindhu made India proud on Sunday by becoming the first-ever player from the country to win a BWF World Championships gold at the 2019 edition of the prestigious tournament in Basel, Switzerland. The 24-year-old Indian was at her absolute best and didn't give any chance to her Japanese opponent and world number three Nozomi Okuhara.

Sindhu dominated throughout the match to eventually seal a comfortable 21-7, 21-7 win in the much-anticipated women's singles final of the tournament. The match got over in just 38 minutes as a stunned Okuhara was completely annihilated. It was Sindhu's fifth medal at the World Championships, thus making her the joint-highest medal-winner in history of the women's singles event of the tournament along with two-time Olympic gold medallist Zhang Ning of China. Sindhu won a bronze each in the 2013 and 2014 editions of the tournament before clinching two back-to-back silvers in previous two editions.

Born on July 5, 1995 in Hyderabad, Sindhu got the first taste of badminton from national chief coach and former India shuttler Pullela Gopichand. She began playing badminton as early as eight before joining Gopichand's Badminton Academy in Telangana. Sindhu sealed her first-ever victory at the 5th Servo All India ranking championship in the under-10 category in Kochi in June 2005. She then went on to win the doubles titles at the Sub-Junior Nationals and the All India Ranking in Pune in the Under-13 category.

In the Under-14 category, the Indian shuttler bagged a gold medal at the 51st National School Games in India.

It was in 2013 when Sindhu lifted her first Grand Prix gold by defeating Gu Juan of Singapore in the summit showdown of the Malaysian Open. She continued her momentum at the BWF World Championships later in that year to settle for a bronze. In the same year, Sindhu also won Macau Open Grand Prix besides being awarded the Arjuna Award, one of the highest honours for any sportsperson in the country.

A year later, Sindhu scripted history by becoming the first Indian player to win a medal at the World Championships for two consecutive years. She once again settled for the bronze in 2014. Sindhu also made her maiden appearance at the Commonwealth Games in the same year and made it to the semi-final of the tournament.

The Indian shuttler's most memorable moment came in 2016 when she became the first-ever female athlete from the country to clinch a silver medal at the Olympics in Rio de Janeiro. Sindhu, who was conferred with Padma Shri award in the same year, went down against the then world number one Carolina Marin of Spain in the final of the Olympics.

In 2017, Sindhu became the first Indian to win Korean Open by defeating Japanese star Nozomi Okuhara in the finals. She once again had an impressive campaign at the BWF World Championships and settled for a silver in that year. A year later, she yet again settled for a silver medal at the World Championships. Sindhu also participated at the 2018 Commonwealth Games in Gold Coast and finished her campaign at the tournament with a gold in the mixed team event and a silver medal in the women's singles event.

In the same year, the Indian shuttler became the first Indian to clinch a silver medal at the Asian Games after going down against Tai Tzu-Ying of Taiwan in the final of the prestigious tournament.

On Sunday, Sindhu added yet another feather in her already illustrious cap by lifting her maiden gold at the BWF World Championships. The Padma Shri Awardee is currently ranked at number five in the Badminton World Federation (BWF) Rankings for women's singles.