His back has been a constant problem and yet he managed to achieve a career-best ranking of World No 12 in 2015, the highlight of which was shocking the then World No 1 Lin Dan. 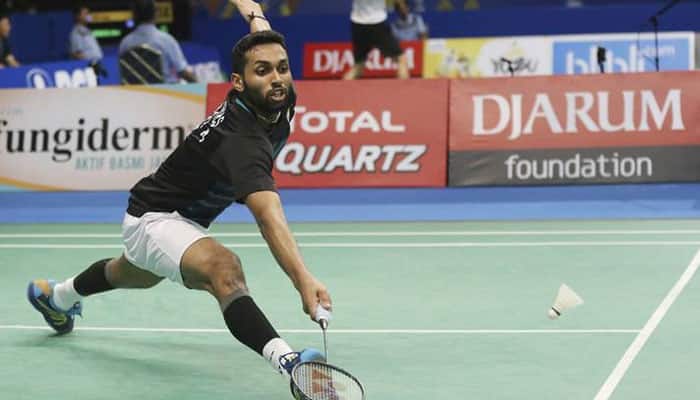 Odense: US Open champion H S Prannoy today attributed his rise in world badminton to a "healthy pressure" in Indian men's singles and said he would look to reach his full potential by qualifying for the Commonwealth Games and Asiad.

In a season that saw him return from a series of injuries, Prannoy was hailed as the giant-killer after his rampaging run at the Indonesia Open. He was bestowed with the biggest deal during the recent PBL auction.

"It has been a good year compared to the last couple of years when nothing happened. The start of the year was good with PBL but I am really disappointed with All England and the Nationals and Syed Modi tournament," the 25-year-old Indian told PTI after returning from a gym session.

He is here to compete in the Denmark Open Super Series.

"Good thing is that men's singles started doing well and it had a major impact on me. In 2016, me, Srikanth and Kashyap were injured and we were trying for Olympic qualifications and a lot of tournaments we couldn't do well. But this year from April onwards, men's singles have been exceptional and that gave a lot of confidence. There was healthy pressure on us and thus we had five players in top 20.

"But I think a lot needs to be done in the next one year. It is crucial for me as I am 25 and it is the prime of my life and this is the time to make it big," said Prannoy, who will face Emil Holst of Denmark in the opening round tomorrow.

Asked about Commonwealth Games and Asian Games, Prannoy said: "It is a big thing. Getting a medal in CWG is easier than qualifying for the CWG because the number of players we have in top 20 and next three months will be crucial. So, we need consistent performances, we need to have big wins and beat top players. It is going to be tough."

Injuries and indifferent form have weighed him down over the years and he had a stop-start campaign. One moment he was on cloud nine -- clinching the 2015 Swiss Open title -- and the next he was left to deal with a toe injury that ruled him out of action.

His back has been a constant problem and yet he managed to achieve a career-best ranking of World No 12 in 2015, the highlight of which was shocking the then World No 1 Lin Dan.

His injury-prone journey continued this season. He had a successful PBL but after that, he made an early exit in the India Open in March and skipped Singapore and Malaysia to work on his fitness and game.

Prannoy played only his second match in about three months at the Indonesia Open, where he beat Lee Chong Wei and Chen Long on successive days to reach the semifinals. He had also beaten Lin Dan in the very first round of the 2015 French Open.

However, he didn't want to rule the 'Holy Trinity' of world badminton out of contention.

"They (Lee, Lin) have been able to do it for last 8-10 years. Now it is tough for them and lots of players have been able to beat them consistently. The competition in the next generation is too much and it would be difficult to have that sort of dominance," he said.

Asked about next month's Senior Nationals where the top 20 players will be playing from the pre-quarterfinals, he said: "It is an extra tournament for us so we have to get used to the conditions as soon as possible.

"We won't have time but as experienced players, we need to do that. There will different pressure with lot of youngsters would want to beat you. So it is going to be tough."

His rise helped him to fetch a whopping deal of Rs 62 lakh in the Premier Badminton League auction early this month and he is now looking to hire a full time trainer.

"I expected 15 percent hike but I didn't expect so much. I was lucky. Praneeth missed out because his name came in last. I can think about my career and look to extend it because I get injured so much so I am looking for a trainer.

"I had a lot of issues with my training since childhood. So now I can start doing what I need, so I am planning to get someone who can be with me all the time and guide it," said the 2014 Indonesia Grand Prix Gold champion before rushing off to grab his lunch.

Satwik-Ponnappa in main draw of Denmark Open, Kashyap out