Voters were asked if they wish to scrap a 1983 amendment to the constitution that gives an unborn child and its mother equal rights to life. 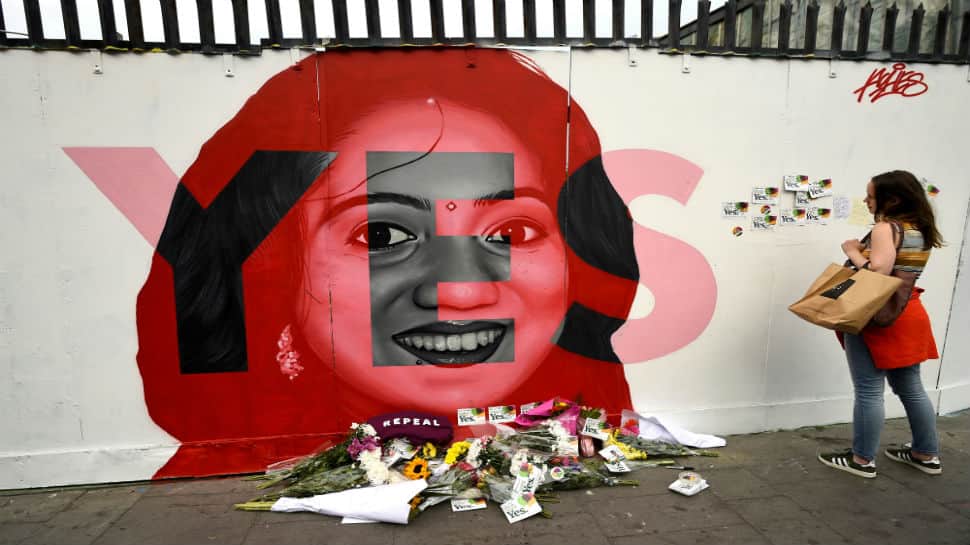 A mural of Savita Halappanavar who died in Ireland due to complications of septic miscarriage. (Reuters)
Share:
Updated:
May 26, 2018, 14:19 PM IST
Source:
Reuters

Dublin: Ireland is set to liberalise some of the world`s most restrictive abortion laws after exit polls suggested a landslide vote for change in what was until recently one of Europe`s most socially conservative countries.

As the vote count began on Saturday morning, the official LoveBoth campaign against liberalisation conceded that the polls painted "a bleak picture" for their efforts to retain a constitutional ban imposed in a 1983 referendum.

"It`s a Yes" read a banner front-page headline in the country`s best-selling newspaper, the Irish Independent, which described it as "a massive moment in Ireland`s social history".

An Irish Times/Ipsos MRBI exit poll suggested that voters in the once deeply Catholic nation had on Friday backed change by 68 percent to 32 percent. An RTE/Behaviour & Attitudes survey put the margin at 69 percent to 31 percent.

Voters were asked if they wish to scrap a 1983 amendment to the constitution that gives an unborn child and its mother equal rights to life.

The consequent prohibition on abortion was partly lifted in 2013 for cases where the mother`s life was in danger.

If confirmed, the outcome will be the latest milestone on a path of change for a country which only legalised divorce by a razor thin majority in 1995 before becoming the first in the world to adopt gay marriage by popular vote three years ago.

"It`s looking like we will make history tomorrow," Prime Minister Leo Varadkar, who was in favour of change, said on Friday night on Twitter.
Vote-counting began at 0800 GMT across the country on Saturday, with the first indication of results expected mid-morning. Campaigners for change, wearing "Repeal" jumpers and "Yes" badges, gathered at the main Dublin count centre, many in tears and hugging each other.

A senator with the opposition Labour Party monitoring the count told Reuters that early tallies suggested the opinion polls were accurate.

"The exit poll I would say is bang on. We’ve done it," said Kevin Humphries, a former junior minister who campaigned for more access to abortion.

No social issue has divided Ireland`s 4.8 million people as sharply as abortion, which was pushed up the political agenda by the death in 2012 of a 31-year-old Indian immigrant from a septic miscarriage after she was refused a termination.

Campaigners left flowers and candles at a large mural of the woman, Savita Halappanavar, in central Dublin.

The Irish Times exit poll showed overwhelming majorities in all age groups under 65 voted for change, including almost nine in every 10 voters under the age of 24.

The fiercely contested vote divided political parties, saw the once-mighty church take a back seat, with the campaign defined by women on both sides publicly describing their personal experiences of terminations.

Although not on the ballot paper, the "No" camp sought to seize on government plans to allow abortions with no restriction up to 12 weeks into a pregnancy if the referendum is carried, calling it a step too far for most voters.

The result is likely to be followed by a battle in parliament on how exactly access to abortion will be increased.

"We will hold the Taoiseach (prime minister) to his promise that repeal would only lead to abortion in very restrictive circumstances. He gave his word on this, now he must deliver on it," Dr Ruth Cullen, an anti-abortion campaigner with LoveBoth said.