Demonetisation was a war on terror funding, that's why it is still criticised

Efforts had also been made to interfere with the intelligence agencies, which were exposing the fake currency racket. 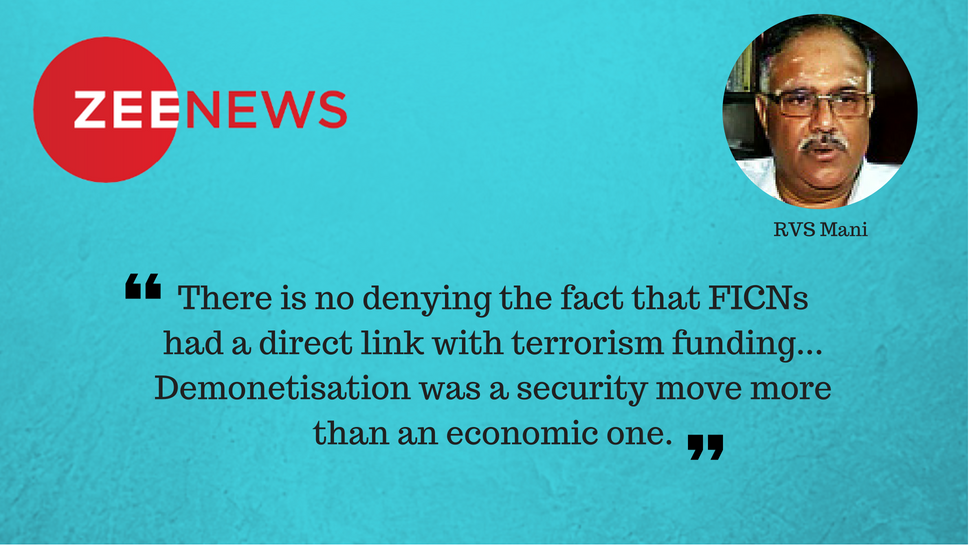 It has been reported in many national media channels that there was lack of consensus on the Parliamentary Standing Committee's report on demonetisation. Indeed, I would have been agitated had there been consensus. Nevertheless, the findings proposed by the chairman, Veerappa Moily, relates concomitant effects of demonetisation on the economy, like a fall in GDP growth by 1%, setting the economy back and job losses. I do not want to comment on these findings. I would only like to recall my earlier blog on the subject. I had brought before the public, the 'coincidence' of a suicide in Karachi within one month of demonetisation being announced.

Replies in Parliament over the quantum of FICNs
I would like to reinforce what has been said already through replies of the Government of India to several questions tabled in Parliament. Firstly, let me illustrate with a question replied in Rajya Sabha on 7/3/2007. Let us first appreciate that finance is the life line of terrorism. The government had acknowledged that the FICN share of terror funding is about 10 percent of the total of the terror funding. This was in 2007. Maybe, this share has grown over the years. Readers who desire to have the exact share of different components of terror funding (as of 2007) may refer to my book, 'Hindu Terror: Insider account of Ministry of Home Affairs'.

Now, let me take you to the reply to another question in Lok Sabha. This had conveyed that an estimated Rs 15-20 crores per annum was the value of FICN being injected into the economy. This reply was based purely on figures of National Crime Records Bureau (NCRB)

NCRB data
May I convey to the readers that NCRB data is collated based the number of crimes reported. I want to make two clarifications here. It is well known that police cutting across states have a tendency of burking the registration of cases. It is only to mitigate this that the then Union Home Secretary had on 23/1/2008 written to all state Chief Secretaries and DGPs to kindly register these cases, so that a reliable assessment is available on the magnitude of the menace.

An interesting anecdote I recall here. My son was studying in Chennai at that time. He used to come for vacations twice a year. While going back, we gave him some currency for out-of-pocket expenses after withdrawing the same from an ATM of the Union Bank of India. That one of the Rs 1000 notes that we received from the ATM was fake was noticed by a shopkeeper when my son tried to pay him using the note. No police case was registered. What is more important is that this case would not be captured in NCRB data.

Other seizures of FICN not in reporting mechanism
Similarly, there are several seizures by intelligence agencies, BSF and other border-guarding forces, and information used to come to us during those days. Also remember, the case of Ravi Dhiren Ghosh in Mumbai, in which the NIA got a conviction and the amount involved was big. Hence, the amount of purported faced value of trafficked FICN used to be much more than what was captured in the NCRB data.

FICN, terror funding and terror attacks
Also, before the 26/11 Mumbai attacks happened, fake currency notes had leaked in the State Bank of India branch at Domariyaganj in Uttar Pradesh, which was intended for funding terrorist attacks in India. Besides, repeatedly our agencies have seized FICNs from several places in Kashmir, Delhi, Gurgaon, etc, a prominent example being the notes seized from the ATMs of ICICI Bank. Hence, there is no denying the fact that FICNs had a direct link with terrorism funding.

Veerappa Moily
Veerappa Moily, readers may recall, was the chairman of the Second Administrative Reforms Commission set up when the UPA government was formed in 2004. Amongst the several reports of the Commission, the Eighth Report was on 'Combatting Terrorism'. As regards the recommendations and their efficacy, it is outside the purview of this blog. However, the one recommendation that was outstanding was that he wanted political oversight over our intelligence agencies. Till then, intelligence agencies were under the oversight of the National Intelligence Board, a highly professional body of security experts.

Political oversight of intelligence machinery
This recommendation prima facie appeared mischievous to those in the security apparatus. Those days, the Ishrat Jehan and Sohrabuddin Sheikh cases were in the headlines. In both cases, pinpointed intelligence input was generated and shared with respective state governments. Further, the concerned state governments had taken action, and what happened in media later is for all to see.

Are politicians reliable to oversee intelligence agencies?
Please recall, I have detailed in my book how one hawala dealer, who was also a Congressman and had been elected MLA of the Maharashtra Assembly, had moved funds for a terror attack. Hawala dealers also used their couriers for foot soldiering FICNs during those days.

Hence, it is a poser to the readers. Demonetisation might or might not have set the economy backward. But was the Congress and Veerappa Moily seeking to revive their agenda of discrediting the intelligence and security agencies, which might have generated the input leading to immediate demonetisation.

Incidentally, the connect between the suicide of Javed Khanani in Karachi and demonetisation does exist and is in the know of the security apparatus. Why is that certain vested interests are still discrediting the government and its agencies?

Also, please do not take the figures on drop in GDP growth on face value. What would have happened if the planned amount of FICN had been pumped into India between November 7-9, 2016. What impact would it have had on your GDP growth? God forbid, if the funds had been used for the intent for which its meant, successfully, what would have been the loss of national assets.

These are points to ponder.