New Delhi: The trailer of Ranveer Singh and Alia Bhatt starrer 'Gully Boy' was unveiled today and has created quite a buzz. Not only was the trailer trending on Twitter, but it was also praised by many Bollywood celebs and critics. Actress Katrina Kaif too lauded the trailer through Instagram stories. 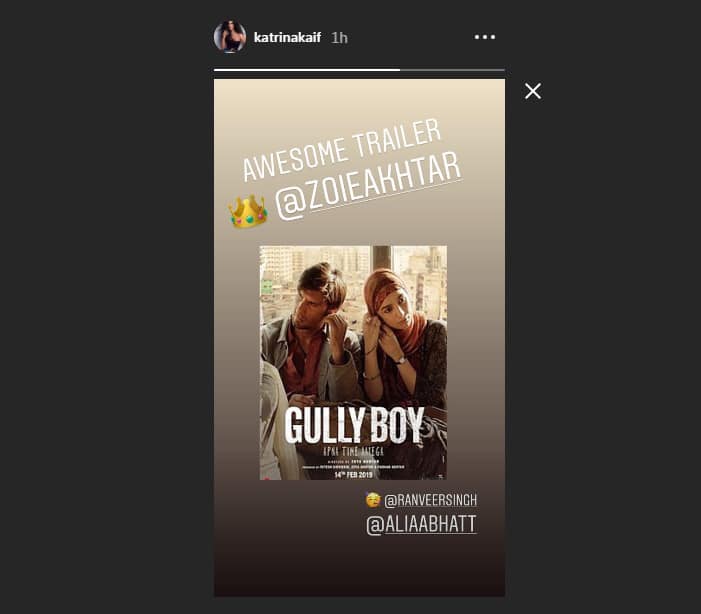 For the unversed, Alia is dating Ranbir Kapoor who was rumoured to be in a relationship with Katrina back in the year 2008. When Alia started dating the Kapoor lad, people wondered if it will change the equation between the actresses. However, time and again, Kat and Alia have shown that they are still on good terms with each other.

On the other hand, Ranveer got married to Deepika Padukone in November 2018. Kat and Dippy shared cold vibes once but have now burried the hatchet and share a warm equation. When Katrina attended the 'Deepveer' reception, eyebrows were raised. Recently a video of Kat and Deepika hugging each other went viral and made it clear that the two actresses are now friends.

On the work front, Katrina will be seen in 'Bharat' which is being helmed by Ali Abbas Zafar. The film stars Salman Khan, Kat and Disha Patani in lead roles. It is slated for 2019 Eid release.