The poster gives a message that the soul of a rap lies in its choice of words.

New Delhi: The new poster of 'Gully Boy' featuring a pen with a mic sends the message evidently about the power of words which plays a major role in the life of a rapper.

New Delhi: Actor Ranveer Singh, who is awaiting the release of his upcoming film 'Gully Boy',  took to social media to unveil its new poster.

The poster featuring a pen with a microphone seemingly hints towards a message about the power of words which plays a major role in the life of a rapper. 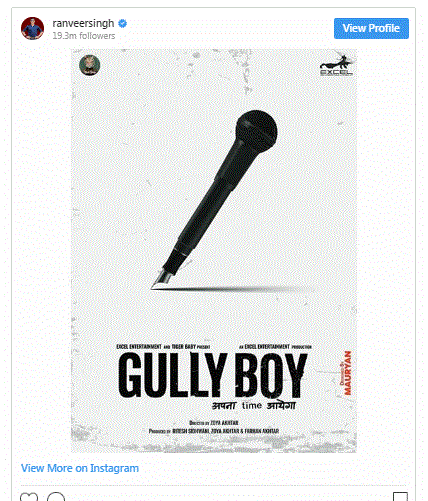 The raging anthem from the much-awaited film Gully Boy, 'Apna Time Aayega' released earlier and since then it has taken over the internet within no time. The video has so far been viewed by over 2.6 crore times.

Speaking of the film, 'Gully Boy' is inspired from the lives of two Dharavi based underground rappers in Mumbai, Vivian Fernandes aka DIVINE and Naved Shaikh aka Naezy. Ranveer,who is paired opposite to Alia Bhatt in the film, is playing the role of a street rapper. The film also stars Kalki Koechlin.

The is Ranveer's second collaboration with Zoya Akhtar, after 'Dil Dhadakne Do'.

Directed by Zoya Akhtar, 'Gully Boy' is produced by Ritesh Sidhwani and Farhan Akhtar under the banner of Excel Entertainment in association with Tiger Baby and is all set to hit the screens on 14th February 2018.