Also, for a biopic about a couple of spirited women who defied all odds, "Saand Ki Aankh" is a surprisingly lazy film. 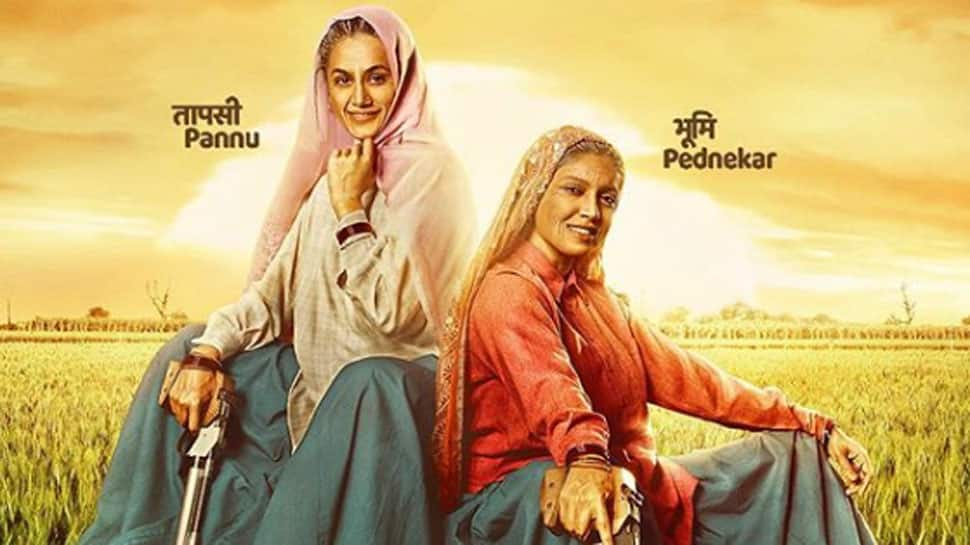 "Saand Ki Aankh" aims well but misses the bullseye. The film is important for what it is trying to tell you, but the effort gets weighed down by an obvious obligation to tick-mark the diktats of commercial cinema.

Bollywood writer Tushar Hiranandani's directorial debut ends up a work of ironies - it is high on intention and low on execution. You admire Taapsee Pannu and Bhumi Pednekar's performances, even as you can't resist a chuckle over the ludicrous prosthetics gone into making them look aged.

The outstanding women, whose real-life story "Saand Ki Aankh" narrates, instil awe but it surprises you how their on-screen personas are imagined without much depth. The drama uses the all-important issue of gender discrimination in heartland India, yet characters are too black-and-white to leave any serious impact.

Also, for a biopic about a couple of spirited women who defied all odds, "Saand Ki Aankh" is a surprisingly lazy film.

Balwinder Singh Janjua's screenplay starts off in 1999, introducing Chandro and Prakashi Tomar (Bhumi and Taapse) as aged bahus in the household of a village Sarpanch (Prakash Jha). Unknown to the crudely chauvinistic men of the household, the sisters-in-law make way to a shooting competition and eventually win.

It turns out Chandro and Prakashi have quietly ventured out to win many more such competitions in the past, but are forced to keep their medals hidden from their men. Only the women of the household know of their sporting talent, and victories.

In a storyline that oscillates between the present and flashbacks through nearly two decades, Chandro and Prakashi's lives are meant to highlight the travails of women in rural India who have little or no liberty to pursue any other activity beyond household chores.

In that sense, "Saand Ki Aankh" was trying to be more than just a sports movie. The film was essentially using the real-life tale of Chandro and Prakashi to make a strong socio-cultural comment, on the need to give women equal opportunities.

The trouble is that the film takes too long to tell its tale and state its message. "Saand Ki Aankh" suffers because it did not have enough material for a two-and-half-hour runtime.

As the years pass, Chandro and Prakashi's granddaughters take to shooting and the same story repeats itself. None of the cruel chauvinistic reality facing women has changed in all these years. The men in the household are still vehemently opposed to accepting the talent and achievements of their women, even though Chandro and Prakashi have conquered the hearts of the rest of the country.

"Saand Ki Aankh" is too simplistic in the way it probes these facets of Indian womanhood in the village scenario.

Bhumi and Taapsee strike oddball chemistry. Driven mostly by enthusiasm to excel in their roles, the two leading ladies of the film remain its backbone. Despite the abundant melodrama that constantly threatens to consume the screenplay, Taapsee and Bhumi clearly seem to be relishing their acts as the Shooter Daadis, and that is primarily what makes them immensely watchable.

Prakash Jha essays a fine portrayal as the antagonist, Sarpanch Rattan Singh Tomar. He maintains restraint while bringing alive an intrinsically uncouth character, which makes his act effective. Vineet Kumar as Dr Yashpal - the man who helps the daadis realise their dreams- is another notable performer.

The performances by the cast somewhat redeem a film that raises a significant issue but struggles to address it effectively. "Saand Ki Aankh" talks of women empowerment, and aims at celebrating womanhood. It needed more assured writing and direction and, perhaps, a twist of intelligent humour would have helped, too.