'Shubh Mangal Saavdhan' is an intelligent amalgamation of a good script and decent acting. 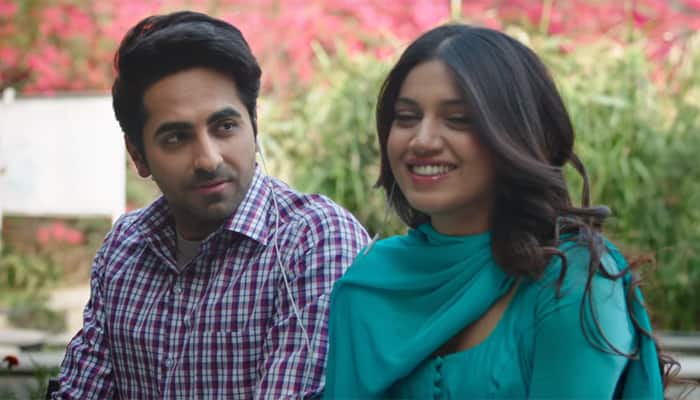 Bollywood stars Ayushmann Khurrana and Bhumi Pednekar worked wonders in 2015 with 'Dum Laga Ke Haisha' and won huge critical acclamation for the film. But, the industry has changed a lot in the past two years and so have the audiences. So, will duo rule the Box Office with their latest movie 'Shubh Mangal Saavdhan'? Well, let's find out.

The flick marks the debut of director RS Prasanna. Interestingly, 'Shubh Mangal Saavdhan' is the official remake of a Tamil Movie 'Kalyana Samayal Saadham'. THE storyline revolves around an NCR boy Mudit Sharma (Ayushmann) who suddenly starts suffering from erectile dysfunction after getting engaged to Sugandha (Bhumi). If you find the subject of the flick interesting enough, then wait further. The real fun begins when the families of Ayushmann-Bhumi indulge in wedding celebrations and, this is when, the flavour of middle-class festivities comes out at its very best.

There are a lot of LOL moments spilled throughout the film. Especially in the first-half, you will get to witness a realistic touch to the storytelling. There is no denying the fact that Ayushmann and Bhumi have portrayed their characters brilliantly. But, the people who need to be commended here are the supporting actors of the movie. With stars like Beijendra Kala and Seema Pahwa, the filmmaker has added to the authenticity of the script.

In most of the second-half, Ayushmann tries to overcome his 'gents problem' while Bhumi poses as his backbone. The script not only makes the audience curious about the cure of impotency but even the on-screen families can be seen placing bets on it. The way Prasanna has portrayed emotions like nervousness and anxiety in 'Shubh Mangal Saavdhan' is really hilarious. And, as a result, the film turns out to be a wedding of epic proportions.

If we talk about the screenplay, the movie fails to maintain the pace at times. Even the climax of the flick was a bit indigestible keeping in mind the tone which the director had set. But, hats off to Prasanna for giving an excellent treatment to a topic like this. At no point, you will feel that the film is going vulgar or uncomfortable words are being used.

In the end, I would just like to say that 'Shubh Mangal Saavdhan' is an intelligent amalgamation of a good script and decent acting. It will make you laugh, it will make you think and it will also show a mirror to the 'modern' society. You will definitely go home wearing a smile.

I am giving this film a generous three. 'Shubh Mangal Saavdhan' is competing with 'Baadshaho' at the Box office. So, the theatre footfall is expected to be less. But, if you are looking forward to a light movie with a bright happiness quotient, then go for 'SMS'.