We have embarked on a course of fiscal reforms: PM Modi at Delhi Economic Conclave

Prime Minister Narendra Modi said India's economy is doing much better than what it was when the NDA government took over, as a result of the series of reforms and policies undertaken by the government. PM said reforms were needed  to transform the nation 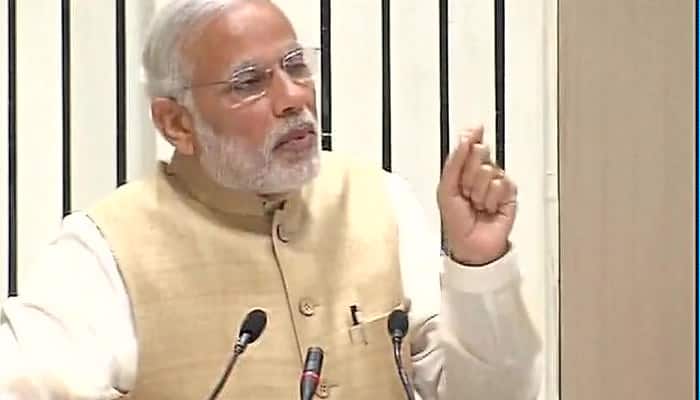 New Delhi: India is moving steadily ahead on the path of fiscal reforms, said Prime Minister Narendra Modi. He was speaking at the inaugural ceremony of Delhi Economic Conclave on Friday.

Hosted by the Finance Ministry, the theme of the conclave this year is 'Realising India's JAM (Jan-Dhan, Aadhar, Mobile) Vision'.

The Prime minister said that JAM (Jan-Dhan Aadhar Mobile) Vision for him means just about achieving maximum in all the parameter of reforms.

He added that the reason for the success of his government so far has been the series of well laid out policies. "We have embarked on a course of fiscal consolidation, we have increased fiscal productive investment". Modi said that the government "wants to have maximum value for every rupee spent, the maximum penetration in technology across the masses".

The Prime Minister said that reforms to transform is like a marathon not sprint. He said that his government wants economic transformation through technological growth

On cutting down wasteful expenditure, he added that decontrolling of diesel prices helped in curbing energy subsidies. By increasing cess on coal by four times, India has been able to reduce he carbon tax, Modi added.

We have improved the economy by every economic indicator, and the economy is doing better than what it was when we took over 17 months ago, Prime Minister Narendra Modi said. He said that the country should reform to transform the life of its citizens, particularly the poor.

Talking about black money parked abroad, Modi said, "Our campaign against tax evasion and money laundering is well known. Rs 6,500 crore was assessed before the new black money act implemented. Additionally, over Rs 4,000 crore has been declared under the new Act. Thus over Rs 10,500 crore of black money from abroad has been detected and assessed."

The PM also said that the tax department has undertaken steps to facilitate electronic return filing which presently covers 85 per cent of assessees.

The PM also said that Swach bharat and clean India program will not only create a swach bharat, but also create a power of well-being for woman. The PM also talked about the banking and agro reforms undertaken by the country. "We introduced a series of agro reforms'', to take care of the food security of the country in future.

Modi add that reforms taken by the government have laid foundation for 12 million jobs in India.