England scored 208-8 in 48.5 overs to grab two crucial points with the three-game series a part of the ICC Women's Championship. 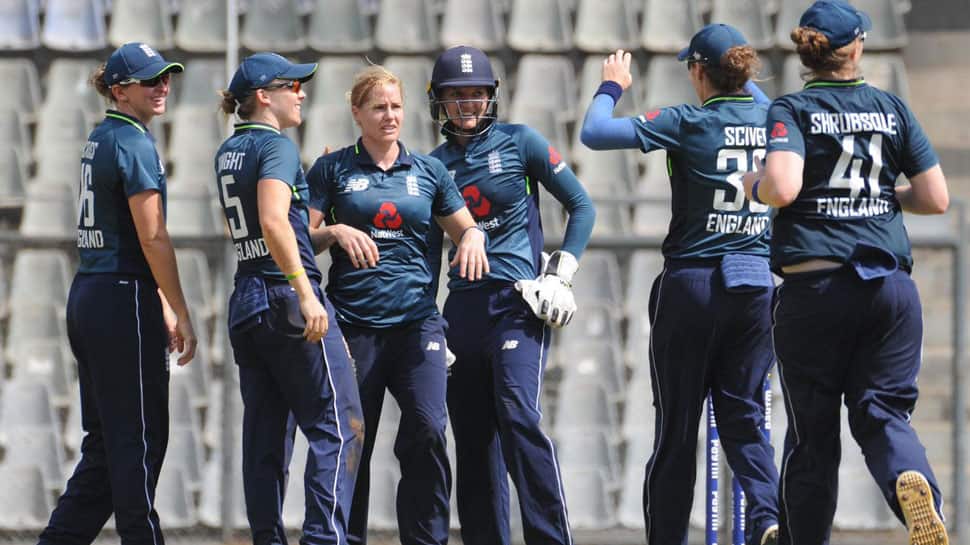 England women on Thursday scripted a sensational recovery from a difficult position to register a consolation two-wicket win in the third and final ODI to prevent hosts India from completing a whitewash in the three-match series.

Chasing India's total of 205/8, England were struggling at 49/5 before all-rounder Danni Wyatt (56 off 82 balls) stitched two crucial partnerships with skipper Heather Knight (47 off 63 balls) and Georgia Elwiss (33 not out off 53 balls) to register a clinical win.

England scored 208-8 in 48.5 overs to grab two crucial points with the three-game series a part of the ICC Women's Championship.

The World Champions are placed in the seventh position and need to be in the top four to qualify directly for the 2021 World Cup. India had already sealed the series after winning the first two games.

The visitors were soon reduced to 40-4 after off-spinner Deepti Sharma caught and bowled in-form Natalie Sciver (1). However, Wyatt and Knight stitched an important 69-run stand for the sixth wicket.

Despite the latter's dismissal, Wyatt added 56 runs for the seventh wicket with Elwiss to bring the visitors close to the target.

Elwiss and Anya Shrubsole (4 not out) then held their nerve to guide the side home.

India women fritted away the foundation laid by Smriti Mandhana (66) and Punam Raut (56) after suffering a middle-order collapse.

Brunt, 33, was the wrecker-in-chief as the hosts suffered a middle-order collapse after they slumped from 129/1 to 150/7.

However, Deepti Sharma (27 not out) and Shikha Pandey (26) later ensured that the hosts crossed the 200-run mark.

Opting to bat, India lost Jemimah Rodrigues (0) early. However then Mandhana and Raut steadied the ship with their 129-run second wicket stand.

They initially played with caution and later hammered the loose deliveries, putting the English attack under pressure.

Mandhana, who mostly relied on pulls and drives, struck eight fours and a six, while Raut hit seven boundaries.

But Brunt brought England back in the game by dismissing both Mandhana and Raut in the 29th over. While Mandhana handed a catch to Dannie Wyatt at deep-midwicket, Raut was bowled.

Brunt then trapped Mona Meshram (0) in front of the wicket and later sent Mithali Raj (7) back to complete her fifer.

Taniya Bhatia (0), Jhulan Goswami (1) further fell cheaply as the visitors made a splendid comeback in the middle-overs.

The two teams will now head to Guwahati to play the three-match T20I series.