WATCH: How fast does Imran Tahir run in his 'trademark' wicket celebration?

Tahir finished with four for 27 in 8.3 overs after former captain Hashim Amla scored his 25th ODI century to set Sri Lanka a target of 300 runs. 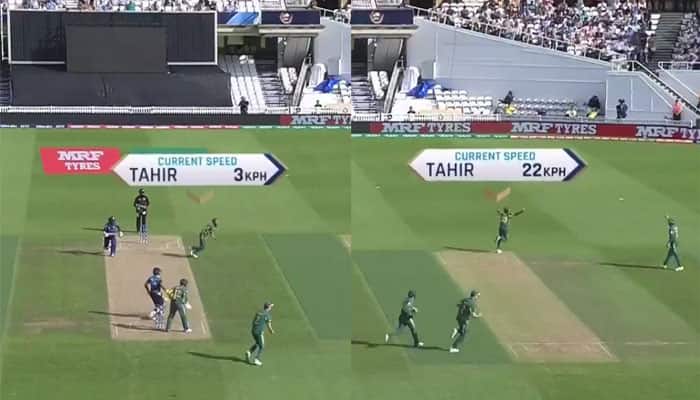 New Delhi: South African spinner Imran Tahir's 'trademark' wicket celebrations are incredibly famous and it truly depicts his zest and passion for the game. But what about the pace with which he runs after dismissing a batsman? (Champions Trophy - Full Coverage)

ICC, courtesy to their latest technology, captured the pace of Tahir's run during one of his wickets in the South Africa vs Sri Lanka encounter.

Here's the video tweeted by ICC:-

Tahir finished with four for 27 in 8.3 overs after former captain Hashim Amla scored his 25th ODI century to set Sri Lanka a target of 300 runs.

Sri Lanka were excellent against South Africa`s seamers, but the introduction of Tahir derailed their innings.

After being put into bat in overcast conditions, Amla consolidated for South Africa with his 25th ODI hundred and the fifth against Sri Lanka.

He added 145 runs with Francois du Plessis, who contributed with 75 runs off 70 deliveries with six fours.