With this win, Australia remain on top of the table with 14 points in eight matches while New Zealand stand at the third position with 11 points in their eight matches. 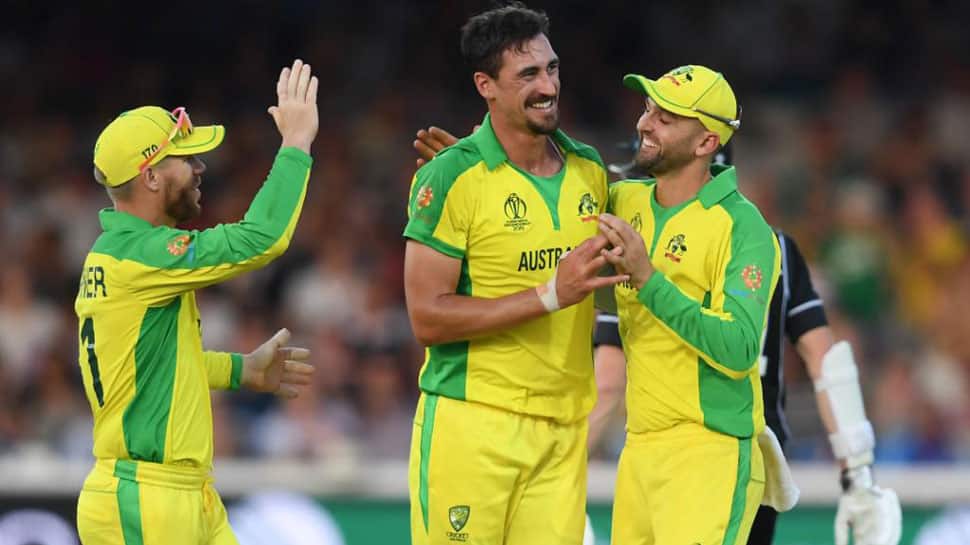 With this win, Australia remain on top of the table with 14 points in eight matches while New Zealand stand at the third position with 11 points in their eight matches.

Chasing 244, Martin Guptill and Henry Nicholls started slowly for the Blackcaps as the Australian pacers did not allow them to score. In the tenth over, Jason Behrendorff dismissed Nicholls (8) who tried to play a pull short but handed a catch to wicket-keeper Alex Carrey.

After the fall of the first wicket, Kane Williamson came in to bat. Guptill could not sustain himself for long and was caught in front of the wicket by Behrendorff in the 14th over at a team score of 2-42.

Ross Taylor along with Williamson built the momentum for the team as they stitched a 55-runs partnership for the third wicket. However, Williamson (40) was sent to the pavilion by the Mitchell Starc in the 26th over. At that moment, New Zealand still required 147 runs and had seven wickets in hand.

Taylor played a knock of 30 runs before he was dismissed by Pat Cummins in the 32nd over. After Taylor, nobody looked in good touch and the Kiwis lost wickets at regular intervals.

In the middle order Tom Latham (14) and Mitchell Santner (12) were the only two batsmen who scored in double figures. New Zealand were bowled out for 157 in the 44th over.

For Australia, Starc concluded with figures of 5-26 and remained the top wicket-taker with 24 wickets under his name in the tournament so far. Earlier, Australia won the toss and choose to bat, posting a moderate total of 243.

The Aussies got off to a bad start as they lost their skipper Aaron Finch (8) early in the fifth over. David Warner and Usman Khawaja built a brief partnership of 23 runs before the former was sent back to the pavilion by Lockie Ferguson. Warner contributed 16 runs to the scoreboard.

After the fall of the second wicket, Steve Smith came in to bat at number four. Smith failed to leave his mark and departed in the 12th over after being dismissed by Ferguson. Marcus Stoinis along with Khwaja stitched a 35-run partnership before Jimmy Neesham dismissed him in the 20th over at a team score of 4-81.

Glenn Maxwell came in to bat at number six but was caught-and-bowled by Neesham, scoring only a single run. After Maxwell`s departure, wicket-keeper batsman Carey and Khawaja built a 107 run crucial partnership in the middle overs that helped Australia get past 200. Carey (71) was dismissed by Kiwis skipper Williamson in the 43rd over. Khawaja (88) held his end firmly before he was sent back to the pavilion by Boult in the third ball of the final over.

Boult completed his hat-trick in the same over as he clinched two consecutive wickets of Mitchell Starc (0) and Behrendorff (0) respectively in the next two balls. For New Zealand, Boult bagged four wickets while Ferguson and Neesham took two wickets each to restrict Australia at 243 in 50 overs.

New Zealand will next face England on July 3, while Australia will play against South Africa on July 6.