Mortaza said that Bangladesh must now focus on the games ahead and ensure a good performance throughout the tournament. 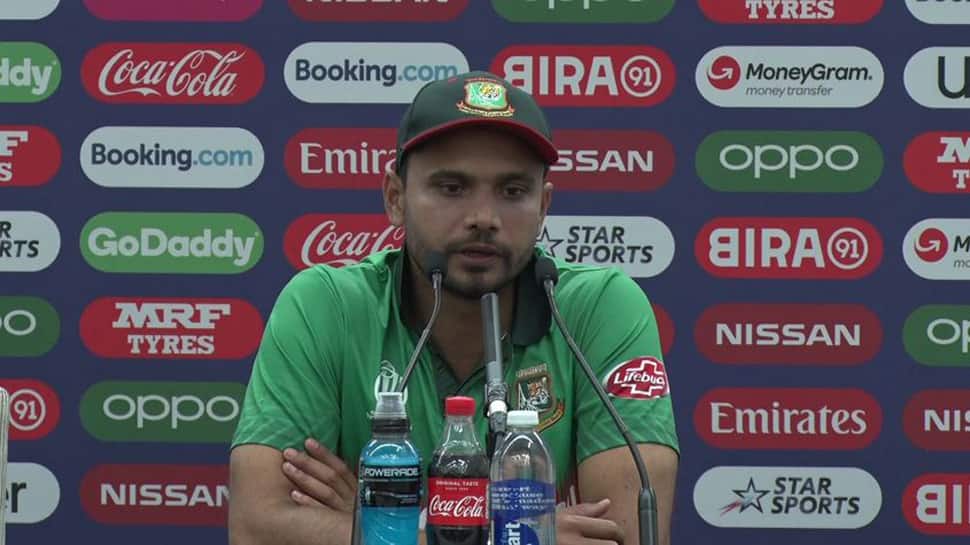 After registering their first victory in the World Cup 2019 by defeating South Africa, Bangladesh skipper Mashrafe Mortaza on Sunday said that the win was a result of an all-around team performance. Addressing mediapersons after the victory against world no 3, South Africa, Mortaza said that the team must now focus on the games ahead and ensure a good performance throughout the tournament.

When asked if Bangladesh was there to deliver upsets on was it a genuine title contender, the skipper said that he would rather concentrate on the matches and let people say whatever their wished to say.

Here’s the transcript of the post-match press conference by Bangladesh captain Mashrafe Mortaza:

Q. Would you call it a complete performance, and the fact that no one scored more than 78, does that make you happy as a captain that everyone contributed to the win?

Mashrafe Mortaza: Obviously. That's the team we are I think. When each one of us contributes, mostly we win.

Yesterday I come here and said the same things that once most of our players step up, there's a good possibility to win the matches. So, I think we've been very lucky and played so well.

Q. Shakib, how much of a difference has he made to the team since he started batting at three?

Mashrafe Mortaza: I think last year he started to bat at three, but unfortunately in the final, he got injured, and it took around six months to come back. Once he came back, he played a few matches at five.

Again, we thought that he had no experience – but he got the experience and made sure that in the top order that he's batted, he's more responsible and he can hold all the pressure and he can deliver his best.

So that was the thought behind it, and exactly he's spot on, and again, he needed to play the first match here, and he performed so well for the team.

Q. You've played in quite a few World Cups. Would you say that this is one of the best ever performances from a Bangladesh team?

But again, I thought one of our best performances, and we love to play the way we played today.

I'm sure that it won't happen everyday, but that is the idea. I know I love to play that way.

Q. Would you tell us a little bit about the difference that Neil McKenzie has made to the batting lineup and in terms of playing against South Africa?

Mashrafe Mortaza: He's amazing. He has been helping our batsmen so well in, I think, more than last eight months. He's been working with us. I wouldn't say only Neil. I think our whole management part is so well. They are working hard with the boys.

We knew that the big tournament is coming, World Cup, and we are starting for World Cup six months behind. I don't think that after one match we should be so happy that we could manage to deliver our best.

Still, there are a few areas we can improve on and hopefully we'll move on from here. Especially, you know, once we have the momentum, we love to keep it going, and as you said, Neil is working so hard for us, and hopefully he will stay with us for a long time.

Mashrafe Mortaza: Yeah, hundred per cent. That is the best we have. I have always said, like if you look at the experience, I have Tamim and Shakib batting at three, Mushfiqur comes back at four - batting at six for the depth; and the middle - batting so well for us and even started slow today, and Soumya, he's coming out with something out the box. And obviously at No. 7, we always keep changing with Mosa and Mushfiqur and Sabbir Rahman.

I think really, it's a heavy batting lineup I think, and obviously I should say, I'm proud of Mushi and Miraz (ph), they are fasting and played at their best today.

Q. Given the strengths of your spinners and the fact that it was the second time this pitch has been used, you must have been very happy to have been sent in to bat.

Mashrafe Mortaza: To be honest, as a team, we have been so. Normally in England, we get a wicket moving a bit, so at the end of the day, now I am expecting that best idea is to lose the toss. So luckily, I lose the toss, and they are giving us batting.

Again, I said that it has been a used wicket, so you never know what would happen, and it was good to bat first. And then later, the spinners played their big role. Always they kept coming back into the bowling and they built a good wicket. It's really been a great performance by the spinner, and obviously finished well with Mustafizur and Mossadek.

Q. Do you think that this all-around performance is the one that will change the perception of Bangladesh being a team that will deliver upsets to one that it's a genuine title contender?

Mashrafe Mortaza: Yeah, you mean that was upset?

Q. No, no, I'm saying in the past, perception may have been. Is this the time it will change?

Mashrafe Mortaza: 100 per cent. It does depend. Can't comment anything about it. It depends on a particular person, how he thinks about it.

So, we are concentrating on our game; that we can deliver -- if we can deliver our best. We knew that, you know, in that stage it's going to be very difficult for us. So we are concentrating on our own games and let people talk whatever they want to. If they are not happy with us, obviously they will talk something wrong; something that is not going for us.

Hopefully this contest will keep going. Sometimes it's bowlers who will keep swinging, so hopefully we'll continue with good work. Obviously, it's not going to be successful every day, but I hope that he'll keep his consistency going on.