Asia Cup 2018: Spirited Afghanistan bow out with tie against India

A spirited Afghanistan held heavyweights India to a tie in their final Super Four match of the 2018 Asia Cup at the Dubai International Cricket Stadium. 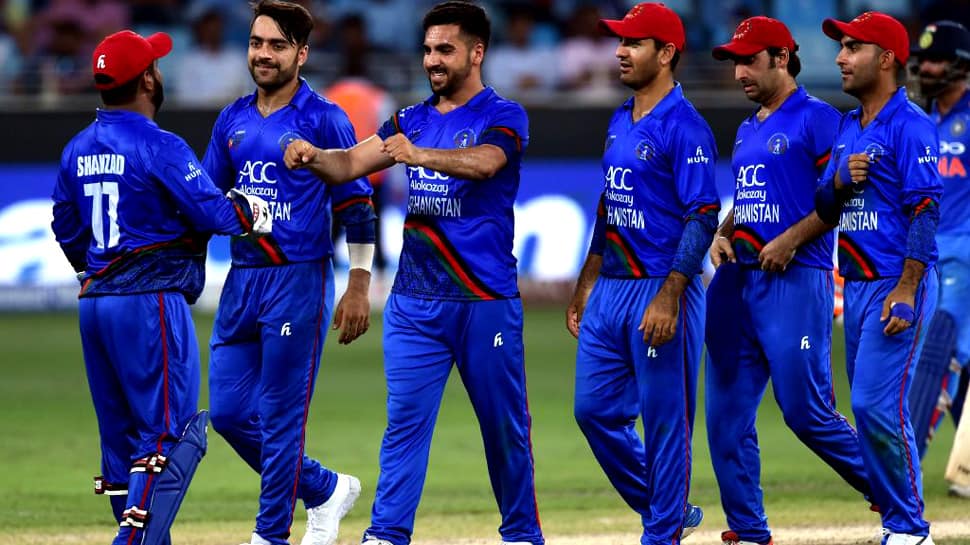 A spirited Afghanistan held heavyweights India to a tie in their final Super Four match of the 2018 Asia Cup at the Dubai International Cricket Stadium.

# What a match! Afghanistan end their 2018 Asia Cup campaign on a high. They managed to put up a challenging total of 252 runs and in response held top-ranked India to a draw. Afghanistan picked up wickets at regular intervals, taking the match down to the last over. Rashid Khan, despite a hamstring injury, got the better of the dangerous Ravindra Jadeja in the penultimate ball to tie a nervy dead-rubber clash.  Earlier, opener Mohammad Shahzad scored a stunning century with a 116-ball 124 to lift Afghanistan from 82/4 to 180/6. He hit 11 fours and seven sixes at an impressive strike rate of 106.90. Mohammad Nabi then accelerated in the death with a 64 off 56 balls, steering his side to a competitive total. India, on the other hand, have already qualified for the final but will have sort their middle-order woes before the title clash against Pakistan/Bangladesh on Friday.

Mohammad Shahzad was today's Player of the Match after his blistering 124!#INDvAFG pic.twitter.com/M2RdKzNu6M

The match ends in a tie! What an unbelievable turn of events here!
R Jadeja(25) sends one into the air and finds the man in the deep N Zadran! #INDvAFG #AsiaCup2018 pic.twitter.com/BY9MdiVCI3

# Wicket!! It's a Tie. Jadeja slogs Rashid Khan's short-pitched delivery straight into the hands of Najibullah at deep-wicket. India 252- all out.

# Khaleel Ahmed picks up a single. The scores are level, India need 1 run to win off 2 balls.

# Wicket!! Another run-out as Siddarth Kaul falls short of his crease. This is brilliant fielding by the Afghans. India 245/9, need 8 runs off 7 balls.

# This match is going down the wire. India need 13 off the last 2 overs.

# Kuldeep Yadav is in at number nine.

# Afghanistan are back in the game. They need 4 wickets to upset the Indian side in this dead-rubber. For India, the onus is now on Ravindra Jadeja to finish things off for India, who need 43 off 54 balls. Expect a cracker of a match. India 210/6 after 41 overs.

# Deepak Chahar is in at number eight.

# Wicket!! Nabi traps Dinesh Karthik with a straight delivery. Another poor decision from the umpire as replay shows that the wickets were missing. Karthik departs for 44 (66), India 205/6!

# Ravindra Jadeja is in at number seven.

# It is a tricky situation for both India and Afghanistan. India need 58 runs in 84 balls while Afganistan need 6 wickets. The run-rate is down to 5.44 per over but as things stand India should reach the target comfortbaly. India 196/4 after 36 overs.

# Kedar Jadhav is in at number six.

# Wicket!!  Aftab Alam gets the better of Manish Pandey (8 of 15) with a length delivery. Pandey attempts to flash a drive on off-side but ends up edging a catch to Shahzad. India 166/4

# Dinesh Karthik is happy to take things slow and bid his time in the middle. Manish Pandey, on the other hand, has looked busy and will try and keep the scoreboard ticking from the other end. A couple of wickets at this stage could put the Indians in trouble. India 164/3 after 30 overs.

# Manish Pandey is in at number five.

# Wicket!! Javed Ahmadi picks up a huge wicket. He beats MS Dhoni with turn and traps him on the front. Replays show wickets as missing but skipper Dhoni (8 off 17)has to depart as India have reviews left. India 142/3!

# India are in a comfortable position after the 100-plus opening partnership between Ambati Rayudu and KL Rahul. However, the Indian side still need over 100 runs to win and have to survive the probing Afghan spinners. Rashid Khan, Mujeeb-Ur-Rahman and Mohammad Nabi have 15 overs in hand and can topple the top-ranked Indians. Testing times for both the sides. India 134/2 after 23 overs.

# MS Dhoni is in at number four.

# Wicket!! Rashid Khan traps KL Rahul, who opted to reverse-sweep a quicker delivery, plumb on the front. Rahul departs for a 66-ball 60. India 127/2!

# Dinesh Karthik is in at number three.

# Wicket!! Ambati Rayudu attempts to clear Nabi over the long-on boundary but hits the ball straight into the hands of Najibullah. India 110/1!

# Ambati Rayudu and KL Rahul are settled as India bring up another 100-run stand for the opening wicket.

# Both the Indian openers are off to a slow start. Afghanistan have been decent with the ball but skipper Asghar Afghan will be wary of the Indian openers, who are slowly starting to accelerate. India 55/0 after 9 overs.

#  This match serves as a great opportunity for the likes of KL Rahul, Manish Pandey and Dinesh Karthik to seal their spots and stay in India's ODI plans ahead of next year's world cup.

# KL Rahul and Ambati Rayudu open the innings for India.

The man of the hour for Afghanistan!
When the other top-order batsmen struggled, he played some extravagant strokes and helped his team put up a competitive total!#INDvAFG #AsiaCup2018 pic.twitter.com/lXvIgrQRuU

# Wicket!! Jadeja traps Najibullah Zadran, who attempted to reverse-sweep, plumb on the front. Najibullah departs for a run-a-ball 20. Afghanistan 226/7!

# Afghanistan have managed to put up a respectable score here, 196/6 after 41 overs, on the back of Shahzad's 124-run rout. The onus is now on Mohammad Nabi, batting at 34 off 37 balls, to finish well in the final leg of the Afghan innings.

# Wicket!! Mohammad Shahzad's fiery knock comes to an end as he skies Kedar Jadhav to Dinesh Karthik at the long-off boundary. Shahzad departs for 124 runs off 116 balls.

# Century!! Mohammad Shahzad brings up his 5th ODI century and his first against India. What a knock.

# Wicket!!  Kuldeep takes 2 in 2. He cramps Asghar Afghan with a leg-break to knock his leg-stump. Afghanistan 82/4!

# Wicket!! Kuldeep Yadav joins the party. He drifts one past Hashmatullah Shahidi, who is comfortably stumped by MS Dhoni. Afghanistan 82/3!

# Wicket!! Ravindra Jadeja gets the better of Javed Ahmadi with a straighter one. Afghanistan 65/1!

# Mohammad Shahzad and Javed Ahmadi open the innings for Afghanistan.

"I have captained 199 ODIs, so this gives me an opportunity to make it 200. It's all destiny and I have always believed in that. It's not in my control, once I left captainship. Good to complete 200, but I don't think it really matters, " said Dhoni at the toss.

# Most ODI's as Captain:

# MS Dhoni is set to captain India for the 200th time.

# Afghanistan have won the toss and opt to bat first.

After a nervy first game against minnows Hong Kong, India have been clinical throughout the tournament. They comprehensively beat Pakistan by 8 wickets in the league stage, by 9 wickets in the super-four stage. India also made short work of Bangladesh, winning by 7 wickets, to storm into the Asia Cup final.

Afghanistan, on the other hand, punched above their belt in the league stages, topping Group B with four points at a stunning net run-rate of +2.270. Afghanistan, however, failed to finish matches in the super four stage and find themselves out of the tournament. They lost to Pakistan by 3 wickets and to Bangladesh by 3 runs respectively.

India, having already qualified for the final, will look to rest their regular players. KL Rahul, Manish Pandey, Deepak Chahar and Khaleel Ahmed may have a game today.

The Afghan side would want to finish the tournament on a high in the dead-rubber clash.