The England women cricket team defeated India by 41 runs in the opening T20I of the three-match series against England in Guwahati on Monday. 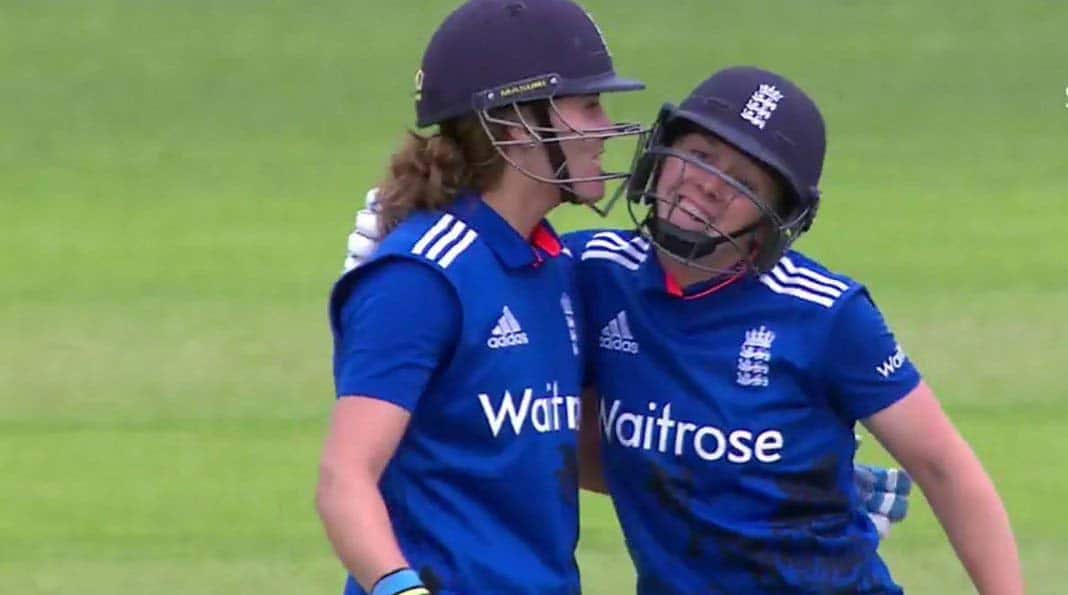 The Indian women cricket team slumped to a 41-run defeat at the hands of England in the opening T20I of the three-match series in Guwahati on Monday.

Chasing a respectable target of 161 runs, India were restricted to a score of 119 for six by the England bowlers in their stipulated 20 overs. Shikha Pandey was the top scorer for the hosts with an unbeaten knock of 23.

Linsey Smith and Katherine Brunt bagged two wickets each while Anya Shrubsole and Kate Cross chipped in with a wicket each.

Earlier, Tammy Beaumont (62), skipper Heather Knight (40) and Danielle Wyatt (35) made significant contributions with the bat to guide England to a score of 160/4.

# Wicket! As and when Reddy was looking settled at the middle, she lofted a delivery from Brunt towards mid-off to hand a simple catch to Sophia Dunkley. With five overs remaining, the home side require another 84 runs with four wickets in hand. India 77/6 (15 overs)

# 16 runs off the last two overs, including two boundaries. Deepti (11) and Reddy (16) are looking to steady India's ship after the hosts lost their first five wickets in quick successions. The Women in Blue need 88 more runs from 36 balls. India 73/5 (14 overs)

# Wicket! Krishnamurthy drives the ball from Kate Cross towards the mid off, only to see Shrubsole take the catch. India require 115 runs from 60 balls. India 46/5 (10 overs)

# Deepti Sharma and Veda Krishnamurthy are currently batting at the crease.

# Wicket! India in deep trouble now as they lost veteran batsman Raj for seven runs. The Indian batwoman looked to hoick Kate Cross's delivery across the line, but ends up getting a leading edge to hand a simple catch to skipper Knight at cover. India 41/4 (9 overs)

# Mithali Raj is the new batwoman in!

# Wicket! A big blow for India as they lost Mandhana and Rodrigues in successive deliveries. England called in Linsey Smith into the attack and she delivered in her very first over of the match by first removing Mandhana for two runs before Rodrigues was caught down leg by Beaumont off Smith's next deliver. India 24/3 (4 overs)

# Wicket! Brunt gives the breakthrough to England. Deol edged the second delivery of the third over to Beaumont, who dived to her left to take a catch. India  22/1 (3 overs)

# Katherine Brunt into the attack

# 20 runs off the first two overs. Deol gets off the mark by scoring a single off the very first delivery, while Mandhana also opened her account by edging the fourth delivery from Sciver to third man for one run. India 20/0 (2 overs)

# Wicket! India have bagged two quick wickets to reduce England to 157/4 after 19.3 overs. After Reddy was smashed by Knight for four boundaries, Deepti Sharma provided a big relief to India by removing the England skipper for 40. Subsequently, Beaumont stepped out to loft a Poonam Yadav delivery over cover as Bhatia made simple stumping. England 157/4 (19.3 overs)

# Wicket! Radha Yadav strikes for India. Sciver tossed up delivery from outside off straight to square leg and Poonam Yadav did not miss the opportunity to take a simple catch. England 103/2 (14 overs)

# Wicket! Shikha Pandey has provided a much-needed breakthrough to India by removing Wyatt for 35. Pandey delivered a length ball outside off and Wyatt slapped it straight to Mandhana at extra cover. A big relief for India. England 93/1 (12 overs)

# 21 runs off the last two overs. Wyatt (37) and Beaumont (21) are looking rock solid at the crease as they have brought up a 50-run stand for the opening wicket.  Arundhati Reddy bowled the most expensive over of the match so far as she conceded 14 runs to England, including three boundaries, before Poonam Yadav gave away another seven runs in the next over. England 66/0 (8 overs)

# Runs are flowing in at a good pace for England as they have added 17 runs in the last two overs. Wyatt (20) and  Beaumont (18) are looking settled at the crease and are smashing the Indian batsmen with boundaries. The Women in Blue are desperately looking to break their partnership. England 45/0 (6 overs)

# An expensive over from Deepti Sharma as she gave away 14 runs in the fourth over. Sharma was smashed by Wyatt for back-to-back boundaries before the England opener pulled back another four runs after edging the fifth delivery towards the third man. England 28/0 (4 overs)

# Pandey bowled a tight first over for India, conceding seven runs to England but only one came off the bat. Wyatt got off the mark when she guided Pandey's fifth delivery of the first over wide of short midwicket for a single. England 7/0 (1 over)

# Danielle Wyatt and Tammy Beaumont to begin England's innings while Shikha Pandey will open the attack for India.

# India win the toss and opt to bat first against England!

Captain @mandhana_smriti calls it right and India have opted to bowl first. The coin rolled a long distance. #INDvENG pic.twitter.com/t0cCMe22BL

The India women's team will aim to finalise a core group of players ahead of the T20 World Cup early next year when it takes on England in a three-match series starting on Monday. The hosts have been doing well in the 50-over format but they have plenty to ponder about in the shortest form of the game, having lost their previous series in New Zealand 0-3.

The whitewash in New Zealand came after a historic win in the ODIs and India will be hoping to reverse that trend with the T20s against England. India defeated them 2-1 in the preceding ODI series in Mumbai.

The southpaw continues to plunder runs, having scored two successive half-centuries in the ODIs against England. She was also in sublime touch in New Zealand last month.

In Harmanpreet's absence, senior player and ODI captain Mithali Raj is expected to play a bigger role in the three T20Is. Mithali was dropped for the first two games in New Zealand before she scored an unbeaten 24 which did not prove to be enough.

The 36-year-old is likely to retire from the shortest format before the T20 World Cup in Australia next year and it remains to be seen how her experience will be used against England.

There will also be focus on Veda Krishnamurthy, who has made a comeback after being left out due to her below-par performance in the 2018 World T20, where India lost to England in the semifinals.

Harleen Deol and Bharati Fulmali too will be itching to prove themselves after replacing Priya Punia and D Hemalatha in the squad.

Left-arm pacer Komal Zanzad, who has replaced Mansi Joshi, is in line to make her international debut. Shikha Pandey will lead the pace department in an otherwise spin-heavy bowling attack comprising of five specialists.