Dhoni, who has been coping a lot of criticism for his waning finishing skills, took India past the finish line with a final over six. 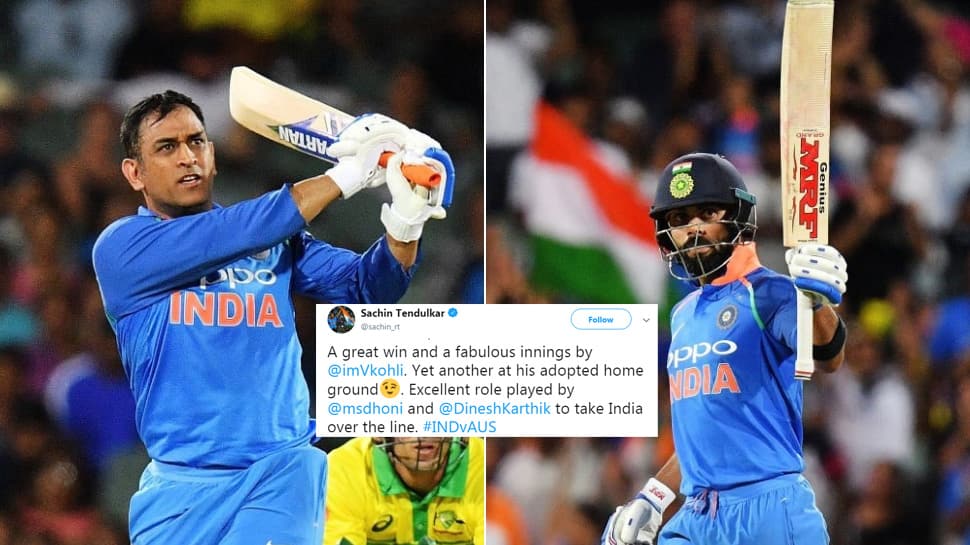 Powered by a brilliant century from skipper Virat Kohli and a perfect finish from with an unbeaten half-century from MS Dhoni, India won the second ODI at Adelaide Oval on Tuesday. The visitors were chasing a target of 299 runs which they won in a nail biter finish with four deliveries to spare. With Tuesday's win, the three-match series is now levelled 1-1.

Just like old times, Dhoni silenced his critics by his performance by getting back his finisher image. From former cricketers to cricket fans all over, Twitter is abuzz with reactions after the stunning victory by Kohli and company.

Fantastic run chase by India . Excellent 100 from Virat, he makes it look very easy. Was wonderful to see Dhoni finish of the game beautifully and Dinesh Karthik's cameo was very very important in the end. The final game should be a cracker.

A great win and a fabulous innings by @imVkohli. Yet another at his adopted home ground_. Excellent role played by @msdhoni and @DineshKarthik to take India over the line. #INDvAUS pic.twitter.com/7n3M2l3hZS

Lovely cameo by Karthik. He now plays this role as well as anybody.

I thought match was over when Chase Master Kohli got out. But then Dhoni has won millions of hearts once again. #AusvsInd #INDvsAUS

I thought match was over when Chase Master Kohli got out. But then Dhoni has won millions of hearts once again. #AusvsInd #INDvsAUS

MSD you beauty! _______
Made our Sankranthi even more special! Critics can take a nap for a while! _#AUSvsIND

Dhoni finishes off in style yet again. King is always a King _
Back to back 50 in 2019 #AUSvsIND #MSDhoni #MSD #Dhoni #INDvAUS

Form is temporary and Class is permanent ! He is back, Period ! #MSDhoni #AUSvsIND

Despite a spectacular hundred, Kohli could not take his team to the finishing line. However, Dhoni led the fort till the end scoring 55 off 54 with a brilliant cameo from Dinesh Karthik who got 25 off 14 balls. The unbeaten 57-run stand off 34 balls ensured that India level the series with four balls to spare.

Australian had scored 298-8 after opting to bat with Shaun Marsh getting to his seventh ODI hundred despite losing the openers early in the innings. Marsh arrived at the crease at 26-2 and scored 131 runs and added 94 runs off 65 balls with Glenn Maxwell who scored 48 off 37 balls.

Kohli, who was adjudged the Man of the match was dismissed in the 44th over after making 104 off 112 balls with five fours and two sixes. Dhoni, who has been coping a lot of criticism for his waning finishing skills, took India past the finish line with a final over six.

Never write of MS DHONI THE GIANT
THE FINISHER IS STILL THERE__#AUSvsIND pic.twitter.com/TMR0NmwbOY

The third and final ODI will be in Melbourne on Friday.