With the win in Australia, Virat Kohli has become the first Indian and Asian captain to lift a trophy Down Under. 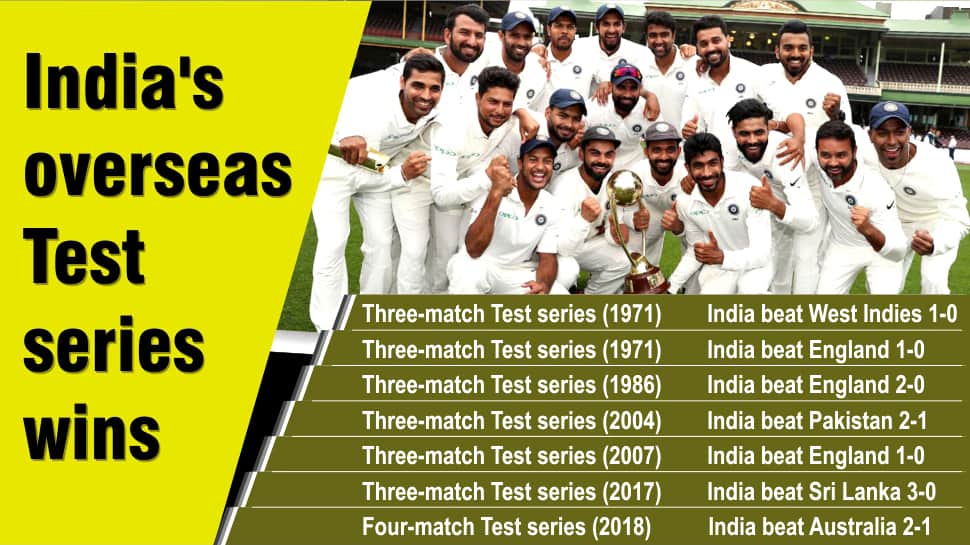 The Virat Kohli-led side created history on Monday by sealing India's first-ever Test series win in Australia by 2-1 after the rain-marred fourth and the final Test concluded in a draw at the Sydney Cricket Ground (SCG).

Though the final Test was turned out to be a damp squib, the visitors utterly dominated the action and eventually became the first team side from the Asian sub-continent to take the honours Down Under.

India had earlier already retained the Border-Gavaskar Trophy by registering 31-run and 137-run wins in Adelaide and Melbourne, but a 193-run knock from Cheteshwar Pujara, 159-run knock from Rishabh Pant and significant contributions from Mayank Agarwal (77) and Ravindra Jadeja (81) allowed the visitors post a daunting 622/7 declared total in the first-innings and bat Australia out of the fourth match

The match also saw India force the hosts to follow-on at home ground for the first time since 1988.

Earlier, Kohli’s side had become the first Indian team in 41 years to win two Test matches in a series against Australia in an away series after clinching wins in Adelaide and Melbourne.

With the win, Kohli has become the first Indian and Asian captain to lift a trophy Down Under.

While it was indeed a historic win for India, let us have a look at some of the side's other greatest Test series wins overseas.

India thrashed Sri Lanka by an innings and 171 runs in the third and final Test at the Pallekele International Stadium to complete a historic 3-0 clean sweep of an overseas Test series.

Following on, the hosts were bundled out for 181 runs on the third day of the match after Ravinchandran Ashwin and Mohammed Shami finished with brilliant figures of 4-68 and 3-32.

Niroshan Dickwella was one of the only three Lanka batsmen to cross 16. He ended as top-scorer for the home side with 41 runs.

India had posted a score of 487 in their first innings before bowling out Lanka for 135.

India clinched a 304-run win in the opening Test in Galle before registering a triumph by an innings and 53 runs in the second match.

The Indian side registered a 1-0 win in the three-match series against England in 2007 to pull back their first-ever Test series win in the country after 21 years.

In the opening match, India was just one wicket away from sealing a victory, but the final session of the fifth day was washed out.

India, however, went on to win the second Test by seven wickets after they chased down a mere target of 73 runs in Nottingham.

The visitors posted 481 runs in the first-innings in reply to England’s score of 198 runs. Zaheer was declared Man of the Match for his five-wicket haul.

The final Test between the two sides ended in a draw in Leicester, with Anil Kumble smashing his memorable maiden Test century in his 118th Test.

The then Sourav Ganguly-led Indian team registered their first-ever Test series victory over their arch-rivals Pakistan in their own home ground by clinching a 2-1 win in the three-match series in 2004.

The visitors clinched a massive win by an innings and 52 runs in the opening Test at  Multan Cricket Stadium, courtesy Virender Sehwag who became the first Indian to hit a triple ton in Tests.

In the second match, Pakistan levelled the series 1-1 after thrashing their arch-rivals by nine wickets with the help of Umar Gul's five-wicket haul in the first-innings.

India then rebounded strongly to once again notch a massive win by an innings and 131 runs against Pakistan in the third Test and clinch the series. Rahul Dravid's 270-run knock was the highlight of the match.

India ended their 15-year-long overseas barren run with a 2-0 Test series victory in England in 1986.

The visitors won the opening match at Lord's by five wickets to take a 1-0 lead in the three-match series.The match saw Dilip Vengsarkar achieve a unique feat of becoming the first and the only overseas batsman so far to smash three tons at Lord's.

However, Kapil Dev was the Man of the Match as he bagged four crucial wicket of England in their second innings to leave India chase down a lowly target of 134 runs.

In the second match, India hammered England by an even bigger margin of 279 runs to clinch the series with a game to spare.

The third match between the two sides ended in a draw.

Ajit Wadekar had guided India to their maiden Test series victories in West Indies and England in 1971.

After the opening two Tests of the three-match series ended in a draw, India sealed a four-wicket win in the third and final match to create history at The Oval on a glorious summer day.

A few months back, Wadekar--who replaced Tiger Pataudi as the Indian captain--led India to a 1-0 series win over West Indies despite heading into the match on the back of some horrific results.

The opening match between the two sides was ended in a draw in Kingstone before India bounced back and recorded a win by seven wickets to take an unassaible 1-0 lead in the series at Port of Spain.

The third and the final Test also ended in a draw at Georgetown, thus handing a maiden Test series win to India in West Indies.