Indian opener Mayank Agarwal on Thursday added a feather in his cap by becoming the second player from the country after former cricketer Virender Sehwag to score a Test double century against South Africa. 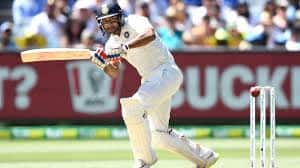 Indian opener Mayank Agarwal on Thursday added a feather in his cap by becoming the second player from the country after former cricketer Virender Sehwag to score a Test double century against South Africa.

The 28-year-old achieved the feat when he smashed a blistering knock of 215 runs on the second day of the opening Test against the Faf du Plessis-led side at the ACA-VDCA Cricket Stadium in Visakhapatnam.

Resuming India's first innings at 202 for 0, Agarwal first pulled back his maiden Test century off 204 balls on his home debut in the longest format of the game before pulling back his first double hundred off 358 balls.

Agarwal eventually finished with a 215-run knock, including 23 boundaries and six maximums during his innings.

As a result, Agarwal became the first Indian opener to smash a double ton since Sehwag's 293-run knock against Sri Lanka at the Brabourne Stadium in Mumbai in December 2009.

Overall, the Kranataka batsman became the 23rd Indian to score a double hundred in the longest format of the game and 86th player from the country to score a century in a Test match.

Besides this, Agarwal along with Rohit Sharma (176) became the third Indian opening duo to stitch a 300-plus stand in the longest format of the game.

The Indian pair put together a huge partnership of 317 runs for the first wicket on the second day of the first South Africa Test. The other two Indian duo to have shared a 300-plus stand were Vinoo Mankad-Pankaj Roy (413 runs against New Zealand in 1956) and Virender Sehwag-Rahul Dravid (410 runs against Pakistan in 2006).

Meanwhile, India eventually declared their first innings at 502/7, with Ravichandran Ashwin and Ravindra Jadeja remaining unbeaten at their respective scores of one and 30.