India will play their opening Test against New Zealand from February 21. 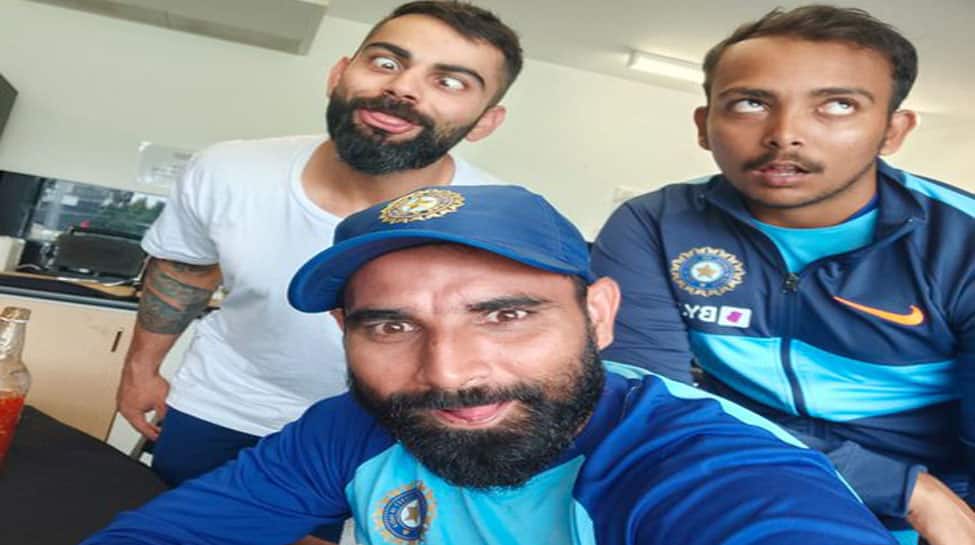 After India ended a three-day practice game against New Zealand XI in a draw, skipper Virat Kohli was seen having fun with his teammates Mohammad Shami and Prithvi Shaw.

The skipper took to his official Twitter handle and shared the picture of the trio with a caption, "Naya post Sundar dost (New post, beautiful friends)."

In the picture, Kohli, pacer Shami and young batsman Shaw could be seen making funny faces with their eyes rolled and tounges stuck out as they posed for a selfie.

Notably, Kohli didn't come to bat for India in their only warm-up match against New Zealand ahead of the two-Test series and instead opted to practice in the nets.

On Sunday, opener Mayank Agarwal ( 81 retired hurt) and Rishabh Pant (70) not only struck half-centuries each but also shared a mammoth 134-run partnership for the third wicket to take India's second innings to 252/4 on Day 3 before the warm-up match ended in a draw at Seddon Park.

Daryl Mitchell was the pick of the bowlers for New Zealand XI with three wickets.

Earlier, the four Indian pacers -- Mohammad Shami, Jasprit Bumrah, Umesh Yadav and Navdeep Saini -- all shone with the ball to help their side bundle out New Zealand XI for 235 in reply to the visitors' first-innings score of 263.

Hanuma Vihari (101) and Cheteshwar Pujara (93) were the top scorers for India.

India, who clinched a five-match T20I series whitewash before slumping to three-match ODI series defeat 0-3 against the Black Caps, will play their opening Test against New Zealand from February 21.