West Indies skipper Jason Holder was left utterly disappointed after a crushing 125-run defeat to India in their World Cup encounter in Manchester. 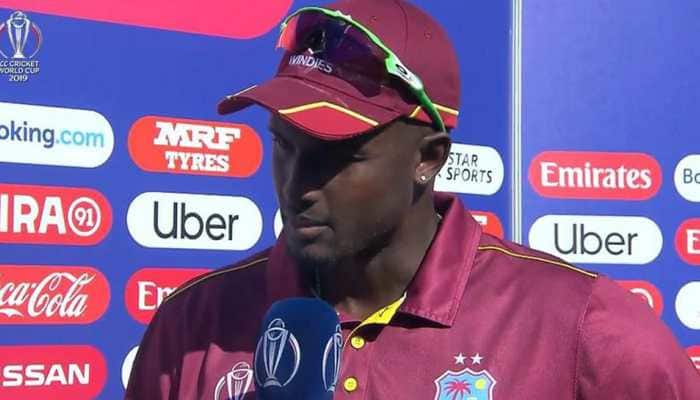 On Thursday, West Indies bowlers came out with a reasonably good performance as they restricted the famed Indian batting line-up for 268/7 after Virat Kohli opted to bat at the Old Trafford.

However, none of the Windies batters could stand against the formidable Indian bowling unit and were bundled out for mere 143. With the defeat, West Indies have been officially knocked out of the tournament with two matches remaining for them.

"I thought the bowlers did a fantastic job on this surface. Just let ourselves down with the bat," Holder said in a post-match interview.

He also said that it was a great opportunity that they lost when wicketkeeper Shai Hope failed to stump MS Dhoni, who went on to score unbeaten 56 off 61 deliveries.

When Dhoni was batting at eight, he charged down the track against Fabien Allen to go for the maximum but failed to connect. Hope couldn't collect the ball and failed to stump out the 37-year-old despite him being yards down the track. He even missed a run-out opportunity as Dhoni stole a quick single in the process.

"In hindsight, Dhoni's (stumping) miss a crucial moment we didn't seize. Let ourselves down significantly in this tournament. Missed a few chances in the field which cost us," said Holder.

Chasing 269 on a tricky pitch, Windies never found any momentum. Mohammed Shami removed Chris Gayle and Shai Hope inside the first seven overs and they never recovered from that early jolt and kept on losing wickets and eventually bundled out within 35 overs.

Holder went on to say that they need to improve in all the three departments of the game, especially considering that ODIs is the weakest format for the Windies.

"Batting was too inconsistent. I can't fault the bowlers. We need to improve. This is probably our weakest format. Kemar Roach was outstanding today. Youngsters have chipped in here and there. Bowlers had a reasonable campaign. I can't fault their efforts. Fielding, definitely has to improve. So does the batting," said Holder.

With just one win from seven games, West Indies are currently placed at the eighth spot. They will next play Sri Lanka on July 1 which will be followed by their last game in this World Cup against Afghanistan on July 4.