Former captain Steve Smith scored 293 runs at Old Trafford as they sealed an 185-run win that ensured they retained the sport`s oldest trophy with a match to spare. 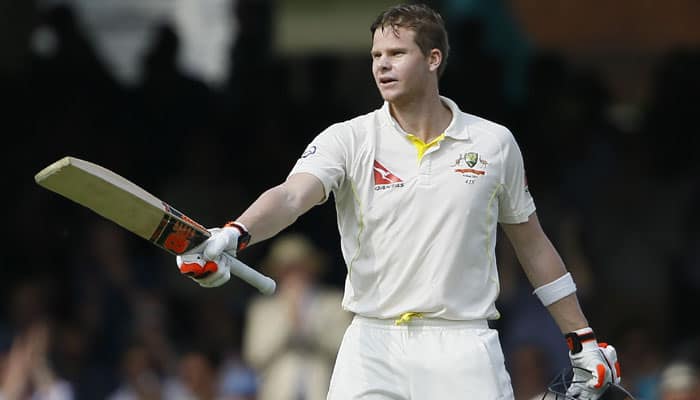 Australia`s media turned the praise up to 11 as they basked in Tim Paine`s side retaining the Ashes in Manchester on Sunday, which also closed 18 months of introspection and abuse following a ball-tampering scandal that tore the team apart.

Fast bowler Pat Cummins finished with match figures of 7-103, while former captain Steve Smith scored 293 runs at Old Trafford as they sealed an 185-run win that ensured they retained the sport`s oldest trophy with a match to spare.

The tourists lead the series 2-1 with just the final game starting on Thursday at The Oval remaining, ensuring that Paine would be the first Australian captain to bring the Ashes home from England since Steve Waugh in 2001.

"Australia looked manifold, unified, overwhelming, and almost purified by their victory — and perhaps, to an extent, they were," Gideon Haigh wrote in The Australian on Monday.

"After the sorrows and setbacks of the last 18 months, the country`s cricket has something to celebrate at last."

The Australians were thrown into turmoil 18-months ago when Smith, his vice-captain David Warner and batsman Cameron Bancroft were banned for their roles in a ball-tampering scandal in South Africa.

The scandal had far-reaching consequences for the sport in Australia with two independent reviews, a promise to overhaul the side`s `win-at-all-costs` mentality and culture, and a clean-out of high-profile administrators.

Paine, who replaced Smith, was praised for his ability to unify the team and change the culture in tandem with coach Justin Langer, with former fast bowler Jason Gillespie tweeting a picture of the wicketkeeper with the one word "Leadership".

Smith and Warner, who received 12-month bans, have been booed and mocked continuously by the crowds in England and while Warner has struggled in the tests, Smith has been elevated to the pantheon with comparisons to Australian great Don Bradman.

The 30-year-old Smith, who missed the third test after being felled by a Jofra Archer bouncer in the second, has scored 671 runs in five innings at 134.20, which included knocks of 211 and 82 in Manchester.

"As a man and sportsman, he may never redeem himself to universal satisfaction; as a batsman, he has moved into elite company, maybe even the most elite," Haigh wrote.

Such has been Smith`s impact throughout the series, Fox Sports` Jacob Kuriype, channelling `mockumentary` comedy film Spinal Tap, gave Smith an 11/10 in his player ratings.

"There`s an inevitability about Smith," Kuriype wrote. "It doesn`t matter what you do, he`s going to score runs.

"It says everything that 82 is his lowest score of the series so far. A perfect 10 isn`t enough in this instance, so we`ll turn this one up to 11."

The Age`s Greg Baum also acknowledged Smith`s contribution with the bat and praised the bowling attack for ensuring that his efforts were not wasted.

"The attack had honoured the titanic performance of Steve Smith," Baum wrote. "The job was done. The Ashes were going home with them.

"These will be forever Smith`s Ashes."

Cummins, whose 24 wickets at 17.41 have elevated him to the top of the test rankings, was also singled out after he took two wickets in two balls late on the fourth day that effectively ended England`s chances of chasing a victory target of 383 runs.

"In the end that final innings should be viewed as Cummins work, the key precipitant in breaking an Ashes drought," the Guardian`s Geoff Lemon wrote.

"Just another entry on his list of accomplishments, and looking good while doing it.

"The worst part is, he`s so bloody likable that you can`t even hate him for being perfect."