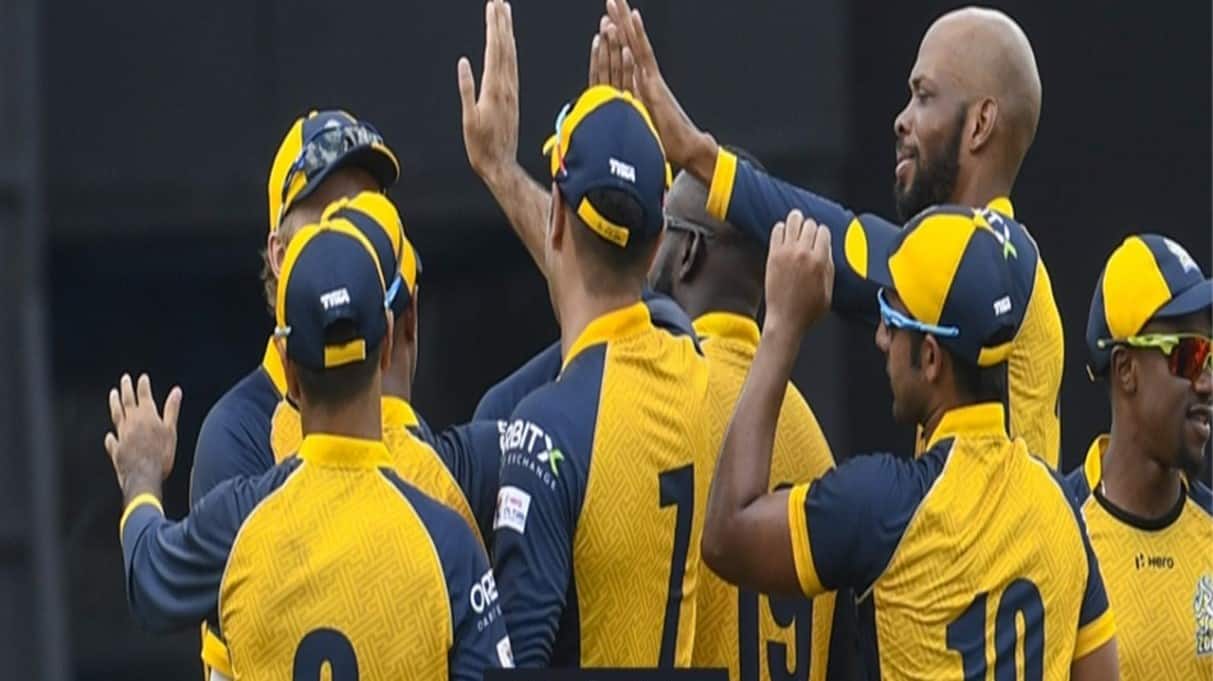 Mohammad Nabi and Roston Chase were right on cue as they lead St Lucia Zouks to an enthralling 10-run victory over St Kitts and Nevis Patriots in a day-night encounter at the Brian Lara Stadium on Saturday.

With this victory, the Zouks have established themselves at the top of the Caribbean Premier League points table.

In the seventh match of the CPL 2020, the Patriots won the toss and captain Rayad Emrit opted to field first.

The decision to bowl, though, backfired as the Zouks went on a rampant scoring spree with their openers Andre Fletcher ( 46 off 33 balls; 4x6, 6x1) and Rahkeem Cornwall ( 16 off 16 balls; 6x1). While Sheldon Cottrell and Sohail Tanvir started tightly to Cornwall, Andre Fletcher was able to pick up boundaries off both.

Cornwall retired ill in the third over, and was replaced by Mark Deyal ( 30 off 17 balls; 6x3). While Mark Deyal started with a maximum on the first ball, he could have been dismissed off his third when Ben Dunk missed a slip catch off Jon-Russ Jaggesar. Jaggesar’s frustration grew when Kieran Powell stepped on the rope while trying to complete a juggling catch.

The onslaught continued as the field went back, with Deyal launching his third maximum to bring up the 50 stand off just 27 balls.

Patriots finally got the breakthrough when Ish Sodhi took a good juggling catch at mid-off to dismiss Deyal off Emrit’s first ball. With the score reading 73/1 off just 7 overs, Patriots needed some quick wickets to bring some semblance to their decision to bowl first.

But new man in Najibullah Zadran ( 28 off 24 balls; 4x3, 6x1) and Fletcher stitched another partnership to turn the tide in favour of the Zouks. Jaggesar finally got his man when Fletcher picked out deep midwicket. With the Zouks so well set, it was a surprise to see the anchorman Roston Chase come into bat, and he fell to a Jaggesar carrom ball before he could make his mark on the game.

Tanvir picked up Najibullah and Sammy caught behind in the same over, and at 123/5 in the 15th the Zouks were in danger of wasting a promising start. Cornwall was well enough to return but hit only one boundary before getting freakishly run out.

Nabi showed his experience and class with two huge Hero Maximums off Tanvir, one of which went literally out of the ground. Another flurry off the 20th took the Zouks to an imposing 172/6 despite their mid-innings stutter.

Nabi was back in the action immediately, bowling an excellent first over to Chris Lynn ( 14 off 11 balls; 4x2) and Evin Lewis (29 off 20 balls; 4x4, 6x2). The two openers were looking dangerous but a stunned Lynn had to depart when Najibullah sprung magnificently to take the catch of the tournament so far off the bowling of Nabi. Joshua Da Silva was dismissed cheaply by Chase for 1 as the Patriots finished the Powerplay at 52/2.

Chase continued to impress when he dismissed Lewis in the 7th over. Wicketkeeper Denesh Ramdin ( 46 off 35 balls; 4x2, 6x2) was the only one to stay vigilant at the crease as the wickets kept falling at the opposite end. It was only at the death when fast-bowler Cottrell led a late fight-back with a blitzing knock of 29 off just 11 deliveries ( 4x1, 6x3).

It was a matter of too little, too late in the end as the Patriots fell 10-runs shy of the target against a disciplined bowling performance from the Zouks led by Roston Chase ( 4-0-12-3) and Scott Kuggeleijn ( 4-0-33-4).