Chandrasekhar is survived by his wife and two daughters.

The Tamil Nadu Cricket Association (TNCA) has condoled the demise of former India cricketer VB Chandrasekhar, who breathed his last following a cardiac arrest on Thursday.

However, there were some reports that the 57-year-old former player was upset over the losses incurred while running a cricket league team and, therefore, he had committed suicide.

Paying tributes to Chandrasekhar, TNCA said that the former was a stalwart both on and off the field for the state.

"A stalwart on and off the field for TN. Heartfelt condolences to family, friends of VB Chandrasekhar on his untimely demise," the TNCA wrote on Twitter.

A stalwart on and off the field for TN.

"The Members and Cricket Fraternity of the Tamil Nadu Cricket Association deeply condole the sudden and sad demise of Former Indian Cricketer V B Chandrasekhar," TNCA wrote in a statement.

Born on August 21, 1961, Chandrasekhar was an aggressive batsman who represented India in seven ODIs between 1988 and 1990. In the 1988-89 Irani Trophy game against the Rest of India at Chennai, he reached his 100 off just 56 balls, then the fastest hundred in first-class cricket by an Indian. This knock brought him into the limelight and he was included in the Indian team for the ODI against New Zealand.

Chandrasekhar, who was affectionately known as "VB", also served as a national selector, Chairman of State Senior Selection Committee and state coach during his illustrious career. The former Indian cricketer was also the first Operations Director of Team Chennai in the Indian Premier League  (IPL) besides being the owner of VB Kanchi Veerans in Tamil Nadu Premier League (TNPL) and a reputed commentator.

Palani further confirmed that the mortal remains of Chandrasekhar will be placed at his residence from 3 p.m onwards on Friday while his final rites will be performed at 9.00 a.m on Saturday at the Mylapore Crematorium in Chennai. 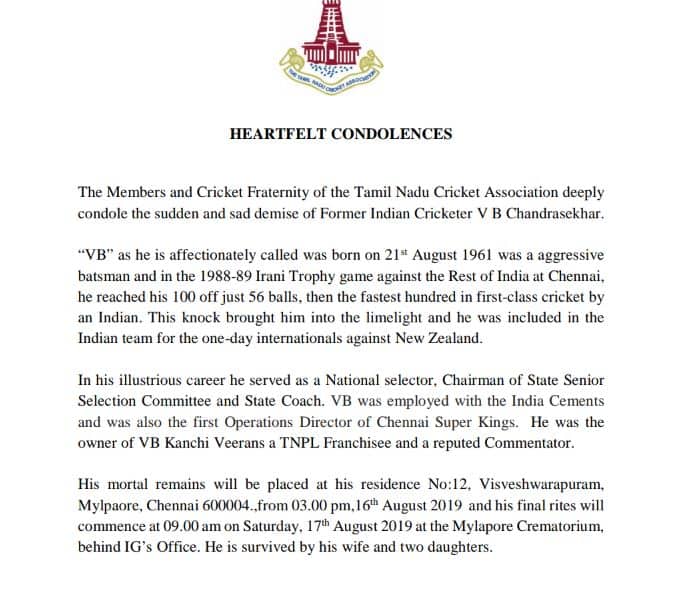 Chandrasekhar is survived by his wife and two daughters.