Set a target of 206, Saurashtra folded for 127 in 58.4 overs, giving Vidarbha their second title triumph in the country's marquee first-class tournament. 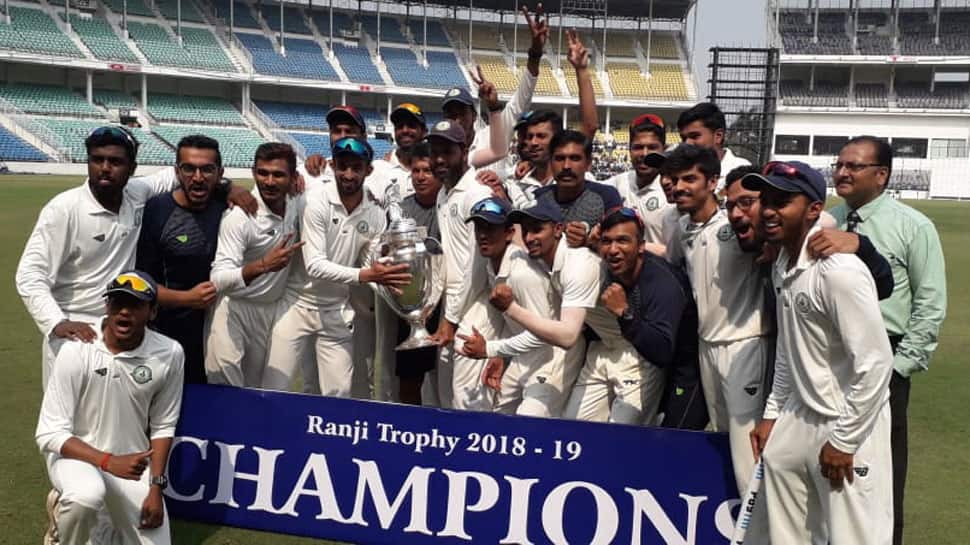 Vidarbha lifted their second successive Ranji Trophy title with a comfortable 78-run win over Saurashtra in the final, proving that their maiden triumph last year was no 'fluke'.

Vidarbha needed five wickets to defend their title while Saurashtra, in a chase of 206, were left with a mountain to climb after a top-order collapse on Wednesday. They required 148 runs for their maiden title on the fifth and final day at the VCA stadium.

"Everyone thought it was a fluke when we won last year and we were under pressure to retain the title. But our focus was process, we never bothered about our reputation," Vidarbha's talismanic coach Chandrakant Pandit said.

The fiercely fought final swung early on but Vidarbha went into the final day with a tight hold on the proceedings and bundled out the visitors for 127 with more than two sessions to spare.

Overnight batsmen Vishvaraj Jadeja (52) and Kamlesh Makvana (14) batted resolutely for the first hour but once the partnership was broken, the end was inevitable for Saurashtra.

Left-arm spinner Aditya Sarwate claimed three of the five wickets that fell on Thursday, to end with career-best match figures of 11/57. He took six for 59 in the second innings.

It was his maiden haul of 10 or more wickets in a first-class match. He had dismissed five batsmen in the first innings.

Sarwate, without doubt, was the star of the match for Vidarbha, as he not only took 11 of the 20 Saurashtra wickets with his left-arm spin, his 49-run knock in the second innings played a key role in his side setting the stiff 206-run target.

Vidarbha is only the sixth team in the tournament's long history to have defended the title.

Mumbai, Maharashtra, Karnataka, Rajasthan and Delhi are the other teams who have managed to win consecutive titles.

"People did not know where Vidarbha was but it will not be the case now. It is huge for Vidarbha. The team is doing a great job," said India pacer Umesh Uadav.

"I never thought I will win two titles with Vidarbha after playing 10 finals (eight with Mumbai)," gushed veteran Jaffer.

Earlier for Saurashtra, Makvana and Vishvaraj were not afraid to go for their shots as they swept Sarwate with confidence to send a few to the boundary ropes.

With Umesh Yadav and Sarwate not getting the desired results, Vidarbha brought Akshay Wakhare into the attack.

Both Jadeja and Makvana though kept rotating the strike. They batted for one hour together and added 33 runs for the sixth wicket.

Sarwate soon started extracting sharp turn from the wicket and tested Makvana's defense. After a close appeal for leg-before, Makvana swept the bowler for a four in the deep mid-wicket region.

However, two balls later, Sarwate bowled Makvana who left the ball, thinking it will turn away, but it remained straight and hit the top of the off-stump.

Only three runs were added to the total when Wakhare trapped new man in Prerak Mankad (2) to push Saurashtra to 91 for seven.

Vishvaraj completed his half-century but Sarwate trapped both him and rival captain Jaydev Unadkat.

Wakhare brought the curtains down on the match when Dharmendrasinh Jadeja lofted one straight to Sarwate.