The Indian skipper, who is indeed one of the fittest Indian athletes at the moment, could be seen doing pull-ups while showcasing his chiseled eight-pack-abs. 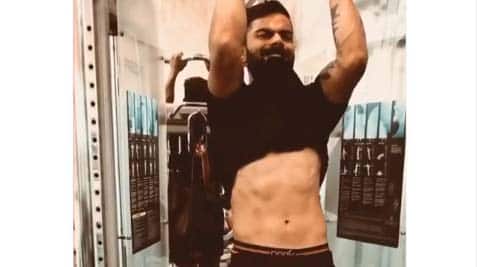 Indian skipper Virat Kohli is a big fitness freak and there is no doubt about it. Despite having a demanding schedule, the 31-year-old swashbuckling batsman never misses his workout session for anything and always follow a strict diet in order to maintain his chiselled physique.

Ahead of the Pink ball Test against Bangladesh, Kohli once again hit the gym and shared a video of himself working out on his official Instagram account.

The Indian skipper, who is indeed one of the fittest Indian athletes at the moment, could be seen doing pull-ups while showcasing his chiseled eight-pack-abs.

"No days off," Kohli captioned the post as he did not skip his drills despite recently coming off from the first Test win over Bangladesh and ongoing hectic practice sessions.

Earlier, Kohli had guided India to comprehensive win by an innings and 130 runs in the opening Test of the two-match series against Bangladesh at Holkar Stadium in Indore.

Mohammad Shami bagged a four-wicket haul while Ravichandran Ashwin took three wickets as India bundled out Bangladesh for 213 runs in their second innings to clinch the match on the third day and take a 1-0 lead in the two-match series.

On the second day, Mayank Agarwal (243) slammed his second double century while Ajinkya Rahane well-supported him with 86-run knock as India declared their first innings at 493 for six  in reply to Bangladesh's total of just 150.