New Zealand remain unbeaten in the ICC Cricket World Cup 2019 alongside India after registering victory by four wickets against South Africa in match 25 of the tournament at Edgbaston, Birmingham on Wednesday. 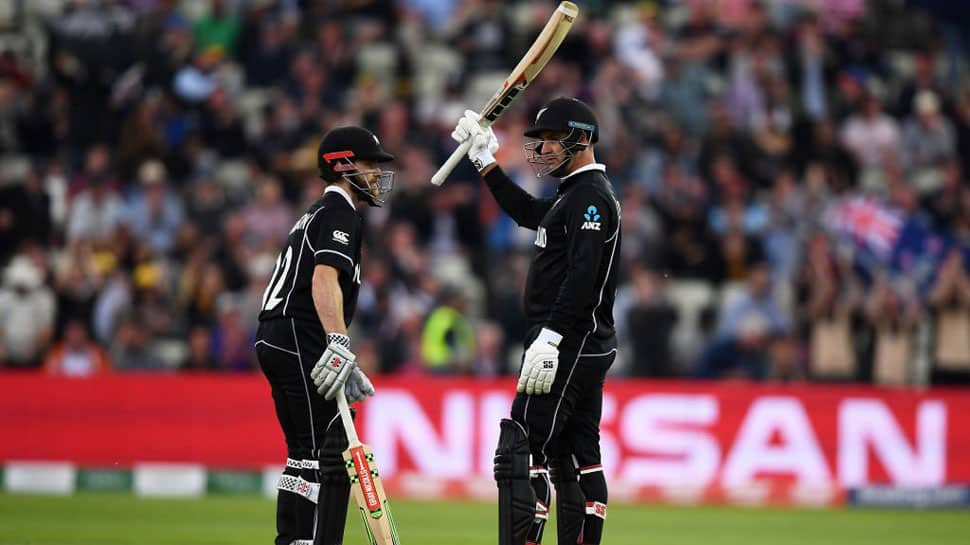 New Zealand remain unbeaten in the ICC Cricket World Cup 2019 alongside India after registering victory by four wickets against South Africa in match 25 of the tournament at Edgbaston, Birmingham on Wednesday.

The Black Caps won the toss and chose to field. The New Zealand bowling attack was able to restrict South Africa to a total of 241 runs for the loss of six wickets in 49 overs following a delayed start due to rain.

Rassie Van der Dussen (67) and Hashim Amla (55) were the top two run-scorers for the Proteas. Amla made his presence felt with the bat on Wednesday after a below-par start to the tournament by his standards becoming the second fastest cricketer after Indian skipper Virat Kohli to complete 8000 ODI runs.

The 36-year-old reached the milestone after completing a double off the final delivery of the 12th over bowled by Lockie Ferguson. The Proteas opener further became the fourth batsman from the nation to reach the landmark after Jacques Kallis, AB de Villiers and Herschelle Gibbs.

New Zealand skipper Kane Williamson emerged as a hero for his side during the chase scoring an unbeaten 106 off 138 deliveries. Williamson further enjoyed quality support from all-rounder Colin de Grandhomme who scored a quickfire 47 ball 60 in an innings comprising of five boundaries and two sixes.

Williamson remained unbeaten till the end, getting the side across the finishing line with three balls to spare.

Proteas all-rounder Chris Morris was the pick of the bowlers accounting for three wickets.

Let us take a look at the highest run-scorers and wicket-takers after the New Zealand vs South Africa match:

Bangladesh all-rounder Shakib Al Hasan has been in excellent form for the side this season and continues to lead the run-getters list with 384 runs in four innings.

English skipper Joe Root is placed on the second spot in the list with 367 runs in five innings. Australian skipper Aaron Finch who has been in prime form recently after being out of form before the World Cup trails Root by 24 runs.

Indian opener Rohit Sharma who scored a century against Pakistan in the last clash of the ICC World Cup 2019 finds himself on the fourth spot with 319 runs. Australian opener David Warner rounds off the top-five list with 281 runs in five innings.

Australian pacer Mitchell Starc has accumulated the same tally in the ICC Cricket World Cup 2019 in five matches, resulting in him being placed second.

English pacer Jofra Archer and Kiwi fast bowler Lockie Ferguson are placed on the third and fourth spot with 12 and 11 wickets respectively.