Let us take a look at the list of players with most sixes, fours, best batting average and best bowling figures after England vs New Zealand clash. 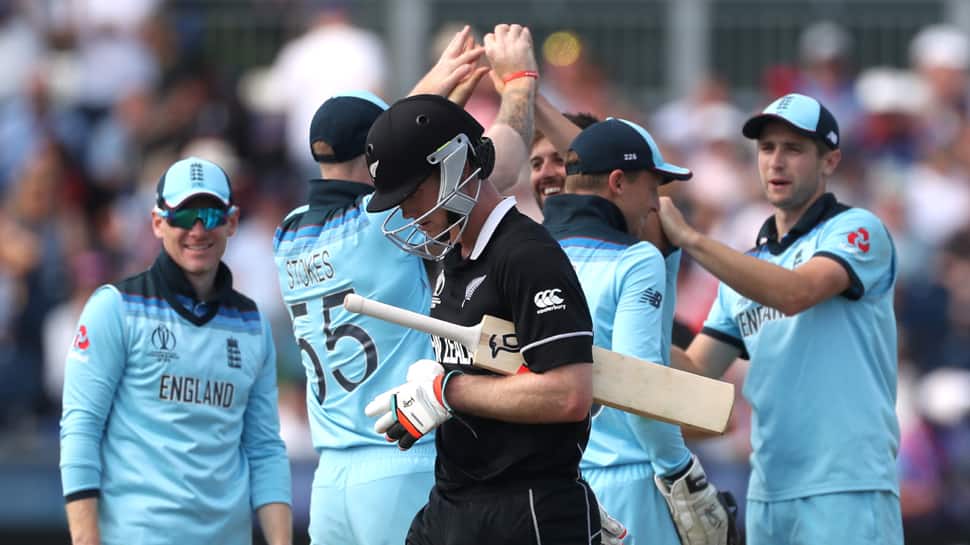 England became the third team to qualify for the semi finals of ICC World Cup 2019 on Wednesday, by registering a thumping victory against New Zealand. The English team crushed the Black Caps by 119 runs.

Skipper Eoin Morgan’s side scored a total of 305 runs for the loss of eight wickets by the end of 50 overs. The highest scorer for England was Jonny Bairstow, who scored 106 off 99 balls before being bowled by Matt Henry.

Chasing the target of 306, the Black Caps failed to put up a decent show as the side was bundled up for just 186 runs. While opener Henry Nicholls could not even get off the mark, Martin Guptill could also bag just eight runs off 16 balls.

The highest scorer for New Zealand was middle-order batsman Tom Latham, who hit a total of 57 runs before getting caught by Jos Buttler off Liam Plunkett. Both Kane Williamson (27) and Ross Taylor (28) also failed to impress with their batting in the match.

Let us take a look at the list of players with most sixes, fours, best batting average and best bowling figures after England vs New Zealand clash:

After his 17-sixes innings against Afghanistan, England captain Eoin Morgan continues to lead the list of players with maximum number of sixes in ICC World Cup 2019. His total of 317 in the tournament so far comprises as many as 22 sixes.

Australia's Aaron Finch is next on the list, with three sixes less than Morgan. Though he has hit a total of 504 runs so far, he has managed to send the ball for the maximum on 18 occasions.

And next in the list is India's Rohit Sharma, the batsman with most runs in the tournament so far. He has hit 12 sixes.

When it comes to boundaries, it’s Jonny Bairstow of England to lead the chart, with 55 4s in his kitty. Bangladesh’s Shakib Al Hasan, who has impressed all with his performance in ICC World Cup 2019, is the second with 54 4s. Rohit Sharma is on the third spot in this list as well.

New Zealand captain Kane Williamson, who has scored 481 runs in seven innings in the tournament so far continues to top the list. He currently has a batting average of 96.20. The second name in the list is that of India favourite opener Rohit Sharma, with an average of 90.66.

Australian Mitchell Starc’s 5/26 against New Zealand at the Lord’s Cricket Ground remains the best bowling figure of ICC World Cup 2019 till now. Shakib Al Hasan of Bangladesh and Mohammad Amir of Pakistan have also taken a five-wicket haul each and remain on the second and the third slot, respectively.

The top two slot in the category is held by Mohammed Shami, who holds a bowling strike rate of 15.07 in four matches.