And with PM Modi's  his epic visit to Israel, it can be widely hoped that Israel will become a core partner for India’s economic modernisation. 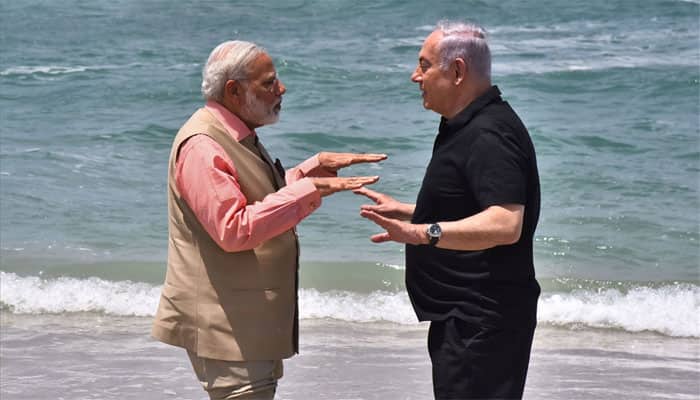 New Delhi: Since the establishment of diplomatic relations between India and Israel, the bilateral trade between both the countries has increased significantly from USD 200 million in 1992-93 to USD 6,034 million in 2012-13.

Since then, it has, however, stagnated around USD 4 - 4.5 billion with bilateral trade (excluding defence) for 2015 being USD 4.14 billion.

During the early years, the trade between two countries comprised primarily of diamonds but it has diversified in recent years to include sectors such as pharmaceuticals, agriculture, IT etc.

Major exports from India to Israel include diamonds and metals, chemical products and textiles.

Major imports by India from Israel also include diamonds and metals, chemicals (mainly potash) and machinery and transport equipment.

It is estimated that almost 75% of bilateral trade in services flow from India to Israel.

Trade in diamonds accounts for nearly 54 percent of the bilateral trade. Nearly 40 diamond dealers from India have opened offices at the Israeli diamond exchange in Ramat-Gan. Some of these dealers have been active in Israel for nearly 30-40 years.

In addition to direct investments, FDI from Israel to India also flows through USA, Europe and Singapore.

Israeli companies have invested in India in energy, renewable energy, telecom, real estate, water technologies, and are also setting up R&D centres and production units in India. The presence of Israeli companies in India has grown to 300.

While official data about India’s investments in Israel is not available, significant investments from India in Israel include 100 percent acquisition of Israeli drip-irrigation company Naandan by Jain Irrigation, controlling stake in Taro Pharmaceuticals by Sun Pharma and Triveni Engineering Industries’investment in Israeli waste-water treatment company Aqwise.

TCS started operations in Israel in 2005, and the State Bank of India opened a branch in Tel Aviv in 2007. During the last two years, Indian IT majors such as Infosys, Wipro and Tech Mahindra have also made notable investments in Israel.

India and Israel have a bilateral agreement for cooperation in agriculture. The bilateral action plan for 2015-18 is currently operational.

10 out of the proposed 26 Centers of Excellence in agriculture being developed in India with Israeli help have already been commissioned across different states such as Haryana, Maharashtra, Rajasthan, Gujarat etc.

The two countries signed an MoU on Cooperation in Water Resources Management, as well as a Declaration of Intent to further cooperation in agriculture during the visit of President Rivlin to India in November 2016.

India and Israel have shown strong desire and political will to conclude an FTA. Seven rounds  of negotiations have been held so far. The First round of negotiation was held on 26 May, 2010.

Israeli President Reuven Rivlin also visited India last year with the hope that the visit would pave the way for FTA that will foster economic growth in both the nations.

It is expected that an FTA would raise the annual trade volume between the two countries threefold  upto USD 15 million.

Foreign Trade Agreement between India and Israel would prove beneficial to both sides. Israel’s demand covers the maximum scope of customs book that is, around  80-90%. They are negotiating products from various sectors such as pharmaceuticals, chemicals, IT and agriculture.

An FTA will open the gates to those products which are not yet exported due to low competitiveness.

During Prime Minister Narendra Modi's unprecedented visit to Israel this week, India and Israel launched a five-year technology fund and agreed to holds talks for an investment protection treaty in a bid to boost trade and business ties.

The two nations agreed to put USD 4 million a year for five years into the Israel India Innovation Initiative Fund, or I4F, said the statement issued after Modi's talks with his Israeli counterpart, Benjamin Netanyahu.

Besides getting Israeli technology firms to invest in India, the fund aims to spur Indian firms to open development centres in the Jewish state and invest in their technology ecosystem.

And with PM Modi's epic visit to Israel, it can be widely hoped that Israel will become a core partner for India’s economic modernisation.

India to be base to economic pole of global growth: Harvard study