Several corporate honchos, have cheered results and trends pointed towards the BJP and allies returning to power with a thumping majority. 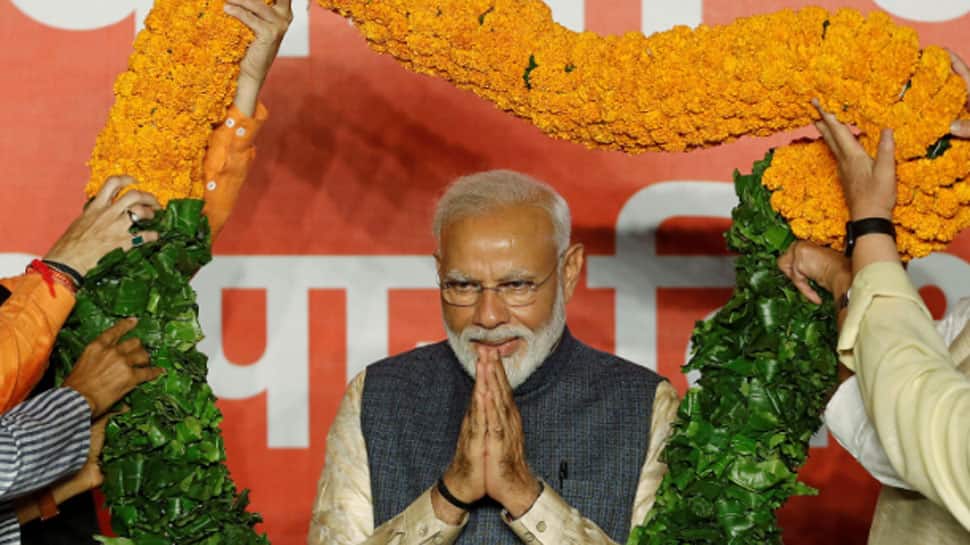 Several corporate honchos, including Gautam Adani, Anand Mahindra, Adi Godrej, Anil Agarwal, Sunil Bharti Mittal and Sajjan Jindal cheered as results and trends pointed towards the BJP and allies returning to power with a thumping majority, saying it was the time for deep reforms entwined with India's ambition to emerge as a global superpower.

"Our nation's biggest strength is its democratic fundamentals and the prudence illustrated by the electorate augurs well for India. Moving into the next level of development requires focus on large scale infrastructure growth, reskilling of the workforce and deeper penetration of technology," Adani Group Chairman Gautam Adani said.

Tata Sons Chairman N Chandrasekaran said the resounding victory for the BJP-led alliance is the result of the nation's trust in Prime Minister Modi and his leadership.

"It is an endorsement of the reforms and huge changes underway that will bring growth, jobs and a better quality of life for all citizens. It also reflects wide support for the PM's vision for a prosperous India," Chandrasekaran said.

This solid verdict would further strengthen his resolve to drive forward the economic agenda to ensure that the fruits of the economic momentum continue to reach the poor, so visible during the last five years, he added.

Mahindra Group Chairman Anand Mahindra said that Modi is set to become the most powerful democratically-elected leader in the world after the thumping win.

"Size of the country (Land mass+population) X Size of the Economy X Size of the election mandate = Leader's Power Quotient. By the measure of this crude formula, @narendramodi is about to become the most powerful, democratically elected leader in the world today...," Mahindra tweeted.

CII DG Chandrajit Banerjee termed the verdict as a mandate for development and said, "The election results will reinvigorate the strong and constructive government-industry partnership and dialogue for growth built by the government in its previous term..."

"I am confident that Modiji's continued leadership will drive our economy to greater heights, paving the way for India to have a larger say in global policies," JSW Group Chairman Sajjan Jindal said.

"Mr Modi initiated many reforms but the work could not be completed as it involved making mindset and behavior changes and legal enactments and other steps faced political difficulties. The voter has now exhibited full confidence in what Mr Modi was doing and has given him an overwhelming mandate to proceed further, Maruti Suzuki India Limited Chairman R C Bhargava said.

"We hope that the new government will reinforce its progressive policies towards industry, and usher in the next phase of reforms to promote ease of doing business and 'Making in India'," Anand Kripalu, MD and CEO, Diageo India said.

PHDCCI President Rajeev Talwar said the majority mandate has laid a heavy responsibility on the government to take unprecedented economic and social decisions that will transform the Indian economy from its current size of USD 2.6 trillion towards a growth rate of 8 to 10 percent each year in the next five years.

RPG Enterprises Chairman Harsh Goenka said the resounding victory of BJP reinforces voter's choice of their most able leader to lead the nation.

"Markets got off to a roaring start, reflecting the sentiment of the nation. Unfinished agendas will get continuity and time to usher in prosperity and growth, both for Bharat and India," he tweeted.

Mahindra & Mahindra M D Pawan Goenka hoped that with the results in, Budget will come out very quickly, adding there is a need "to bring back government spending in a big way" as it had slowed down from the fourth quarter of the last financial year.

Assocham President B K Goenka said, "a strong and stable government would bring in more foreign investment even as domestic firms are witnessing renewed confidence. We are in for a virtuous cycle where consumption and investment drive each other."

Expressing similar sentiments, noted banker Uday Kotak said in a tweet, "Time for transformation of India. Time for deep reform. I dream of us as a global superpower in my lifetime. Heartiest congratulations to @narendramodi, the BJP, and the NDA."

Ficci President Sandeep Somany said there is an urgent need to bring investments on track and boost consumption to better GDP growth from the current around 7 percent level, which will help in generating more jobs and taking care of the rural distress.

Apollo Hospitals Group Chairman Prathap Reddy said the clear majority for a second term should give government the fuel it needs to continue on path of fiscal transformation and take the country to its rightful place in global economy.