After all, there is no harm in giving logic a small break for a while. 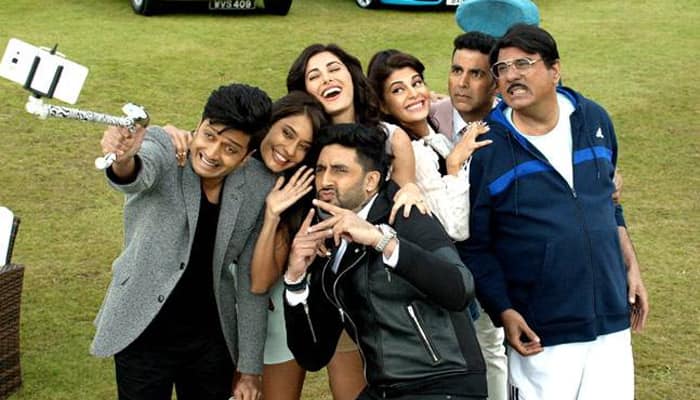 New Delhi: Well, first things first. Every genre of cinema has its own essence. And, if you are looking for even a bit of sense, then stay away from Akshay Kumar's 'Housefull 3'. I repeat, stay away from this film as it promises to be a paisa vasool entertainer only for those who are ready to leave their brains at home.

To be brutally honest, keeping in mind the summer break and vacation time for family audience, the Sajid-Farhad directorial is expected to gain big at the Box Office. Not to forget the performances from all the lead actors.

Filmmaking is an all-round effort and 'Housefull 3' proves it. From casting to dialogues to locations, the flick is a finely woven piece of cinema where one loose end gets overshadowed by all the brilliance around. By loose end, here we mean storyline. It is kind of weak and expected but, hey, what else were we expecting from 'Housefull' franchise.

Akki once again made it clear that his comic timing is a class apart from any of his contemporaries. Most of the punches from Akshay's side weren’t his lines, but came in the form of expression. Oh boy, he was a laugh riot. Being familiar with the tone of 'Housefull', he made sure that the audiences get a lil' more this time. Yes, he is the soul of 'Housefull 3'.

We have seen Abhishek pull off comic characters in 'Happy New Year' and 'Bol Bachchan'. We already knew that he would do justice to this character and he surpassed our expectations this time making things more vibrant with his in-born swag.

Riteish has his own charm. He manages to do all the nonsensical stuff and gets away by making us go ROFL anyway.

The casting of the third 'Housefull' is brilliantly done. Even a character with a little on-air time, manages to do his job with the required impact.

Nargis, Lisa and Jacqueline keep the glamour quotient sky-high throughout the run-time. Their dialogues make them look more than just eye-candies. Yes, they are collectively an asset to the film's so-called 'storyline'. Jackie Shroff, Boman Irani and Chunkey Pandey - all three of them bring life to their characters with splendid performances.

Music is refreshing and foot-tapping. But, the real heroes of this movie are its directors - Sajid Samji and Farhad Samji. The duo has surpassed our expectations and, as a result, the entire cinema hall was laughing their asses off throughout. Yes, it is slapstick, clichéd and dumb. But, it is exactly what you guys need this summer to beat the heat. If you ask the reason why 'Housefull 3' is worth a watch, we would have no harm mentioning its dialogues. They are so lame that they are actually good.

Our verdict is that 'Housefull 3' is a full-on family entertainer. After all, there is no harm in giving logic a small break for a while.

Here's how Varun Dhawan is getting trained for 'Dishoom'? Pic inside